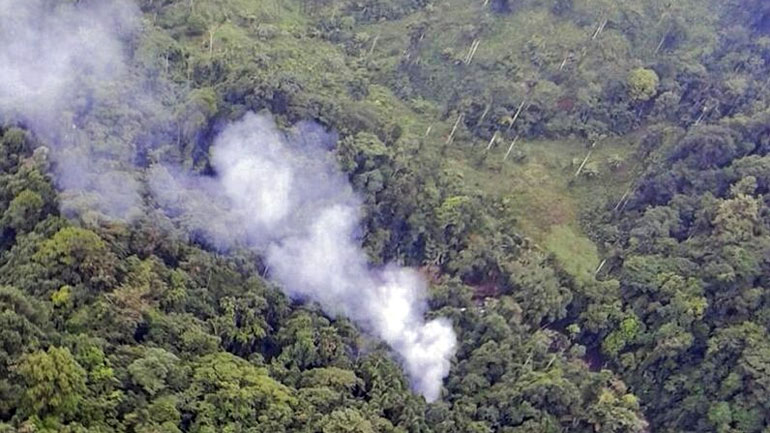 Helicopter that crashed in northwest Colombia was shot down: Opposition

A helicopter crash killing 16 police in northwest Colombia was not due to technical failures, but because it was shot down, an opposition senator claimed Wednesday. Locals confirmed heavy fighting in the area before the crash.

According to authorities, the death of 16 policemen was caused by a technical failure of the Black Hawk helicopter that crashed in the Carepa municipality where security forces have been hunting Urabeños boss “Otoniel” since early this year.

However, according to opposition senators Alvaro Uribe and Alfredo Rangel, both of the Democratic Center party, leaked audio from a helicopter pilot flying near the helicopter that crashed indicates the plane might have been shot down.

In the audio, the pilot said that “it looks like they were hit from below, not with bullets but with a ‘tatuco’,” a home-made mortar commonly used by FARC guerrillas.

A leader of indigenous people that live in the area of the crash reported that members of the Polines community witnessed gunfire from 6AM in the morning until 9AM, when the helicopter carrying 18 police officers crashed into the jungle terrain.

Colombia’s Defense Minister, Luis Carlos Villegas, rejected this version of events, stating “There is nothing that leads us to say that it was an external action.” He added that the helicopter was completely destroyed, the largest remaining piece measuring just one meter.

Explicitly mentioning Uribe and Rangel, Villegas requested “respect for the victims and their families” and not spread false information.

Colombia’s Chief of Police General Rodolfo Palomino reiterated that “there is no evidence that the helicopter had been attacked,” and reported that air safety specialists are currently conducting investigations to clarify the cause of the crash.

Tatucos are projectiles fired from dug-in cylinders. They are commonly used by the FARC in attacks on security forces on the ground, but are controversial because the weapons are almost impossible to aim as their base often is dug into the ground.

According to General Carlos Bueno, the commander of Colombia’s Air Force, “trying to aim at a flying helicopter with an improvised artifact in this type of [jungle] vegetation is practically impossible. If it is not easy with a guided missile, it would also not be with an artisan system,” the general told Blu Radio on Wednesday.

The FARC is currently upholding a ceasefire in order to facilitate ongoing peace talks in Havana, Cuba. However, the guerrilla group has said its units would defend themselves if attacked.

The Urabeños, who control most of the region’s drug corridors, have never been reported to use tatucos and generally avoid direct confrontations with the armed forces.