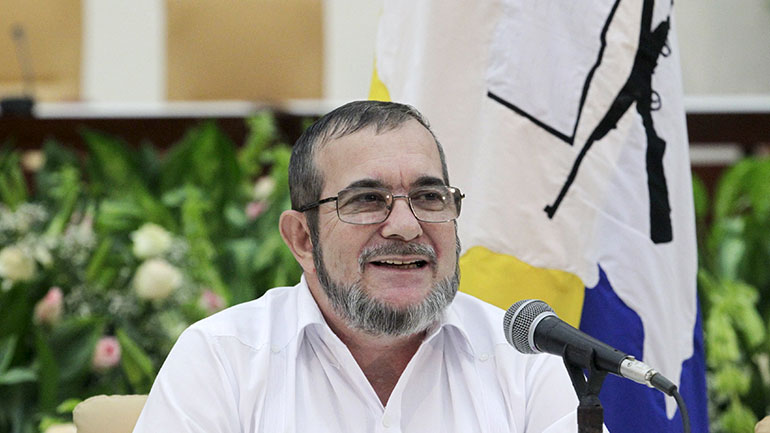 FARC leader says 99% of guerrillas will demobilize after peace deal

FARC leader “Timochenko” said in an interview published Sunday that he believes almost all guerrillas belonging to his rebel group will demobilize in the event of peace.

The guerrilla leader, whose real name is Rodrigo Londoño, made the claim in an interview with Semana, one of Colombia’s most influential weekly magazines.

When asked about the percentage of guerrilla fronts and individual guerrillas will effectively demobilize if a peace deal is reached, Timochenko said that “of the front 100%. If you’s ask me about the guerrillas, I would give it a tiny margin, let’s say of 99%.”

The FARC leader’s estimation is extremely optimistic compared to experts cited by The Associated Press, who have said as many as 7,000 guerrillas could refuse to demobilize.

The director of Colombia’s reintegration agency, responsible for reintegrating FARC fighters after a peace accord, told Colombia Reports that “there is always a margin of people who do not demobilize.”

However, ACR director Joshua Mitrotti refused to be specific, claiming it would be “irresponsible” to speculate the number of FARC guerrillas who will not demobilize after the peace deal.

Mitrotti said the government anticipates that “probably some fronts will continue to be tied to drug-trafficking, smuggling and extortion.”.

Among analysts and conflict monitors there exists no consensus about possible divisions within the FARC and the possible separation of guerrilla units from the national organization.

However, some division has become visible in areas where guerrilla units have close ties to local drug barons or where the guerrillas themselves have become the drug barons.

According to the CERAC, a conflict-monitoring group that independently investigates attempts to de-escalate the conflict, there have been at least four FARC attacks in which guerrillas ignored the unilateral ceasefire imposed by their leadership in July last year.

Vice magazine last year quoted a FARC fighter saying that “El Paisa,” the chief of the feared Teofilo Forero front in Caqueta, “is against the peace negotiations.”

Locals from Guaviare, one of the FARC’s main cocaine hubs in south Colombia, have told researchers that members of the FARC’s 1st front have made known locally that they will not take part in a peace process.

Among paramilitaries and guerrillas who demobilized in the past decade, the recidivist rate has been about 24%, according to the Organization of American States.

But with estimates of the pending demobilization of between 20,000 and 40,000 guerrillas, militants and unarmed members, it is virtually impossible to estimate how many FARC members will remain in arms.

Peace talks have been taking place in Havana, Cuba since November 2012 and are widely expected to be successfully finalized this year.