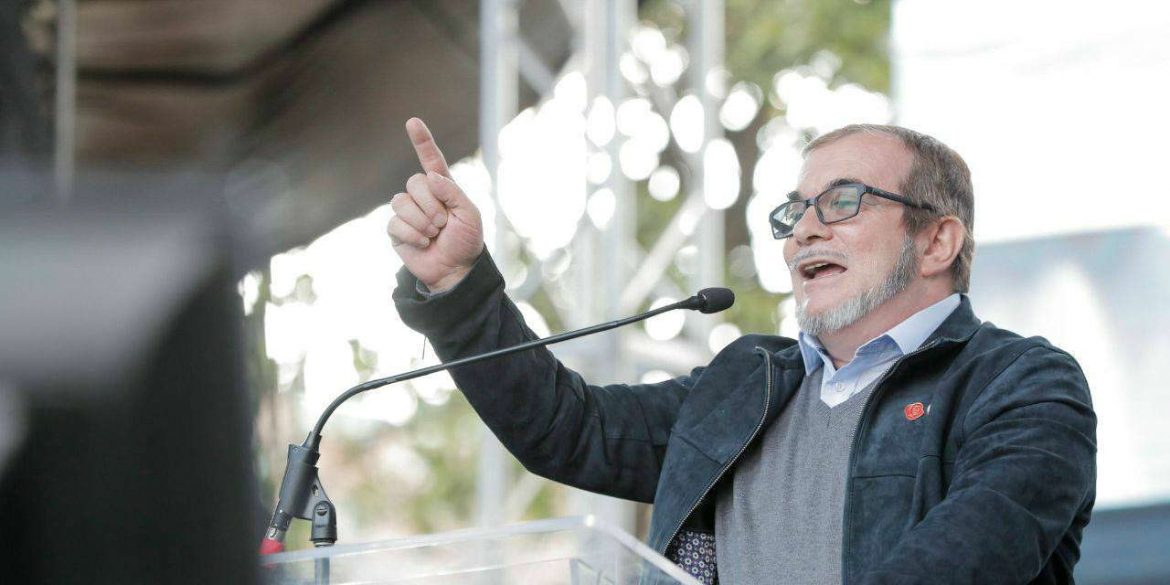 Rodrigo Londoño, also known as “Timochenko,” became the president of Colombian socialist political party FARC after the former guerrillas laid down their weapons in 2017.

Before leading the group’s demobilization and disarmament, Londoño was the last military commander of the FARC, which was founded as a guerrilla group in 1964.

Londoño was born in Calarca, a municipality in the eastern part of Quindio in Colombia’s coffee region on January 22, 1959 just three hours away from Genova, the birthplace of FARC founder, Pedro Antonio Marin, alias “Manuel Marulanda.”

While a teenager, Londoño joined the Young Communists League and later moved to Moscow during the height of the Cold War to study medicine and cardiology at Patrice Lumumba University. He allegedly received military training in Tito’s Yugoslavia and completed his studies in Cuba.

Upon returning home to Colombia, those who knew him said he had become decidedly more radical. More versed and immersed in his ideology, Londoño joined the FARC in 1982 after being introduced to the rebel group by Miller Chacon.

As part of the 9th Front in the department of Antioquia, Londoño engaged in some of the most pronounced violence in the FARC’s history. The 1980s and 1990s saw right-wing paramilitaries massacre suspected rebels with the cooperation or the willful ignorance of security forces and engage in intensely violent struggles with FARC forces.

The increased paramilitary attacks intensified the FARC’s military campaign against the state and the country’s elite. In order to recover the losses the FARC incurred at the hands of paramilitaries, kidnapping became a prominent and viable source of income.

This bloody era gave Londoño ample opportunity to utilize his Yugoslavian military training which specialized in strategy and counterintelligence. He was quickly promoted and in 1986, Londoño received his nom de guerre “Timochenko” and became the fifth member of what was to become the seven-man Secretariat.

Now a part of the high central command, Londoño was put in charge of the complex and strategic Magdalena Medio Bloc in northeastern Colombia. It was here that the guerrilla chief redirected military actions with an eye towards controlling defections and expanding the FARC’s influence into cities. He also set organizational policies that were responsible for the manufacture and distribution of hundreds of tons of cocaine.

Reclusive and obstinate, Londoño rarely granted interviews and he refused to take part in the failed peace negotiations between FARC and the Colombian government during the 1980s and 1990s.

The unsuccessful peace talks amplified the FARC’s offensive. But in 1997 with the emergence of the AUC, Londoño and FARC were forced into a strategy of resistance. This meant more guerrilla warfare – land mines, car bombings, etc.

The guerrilla leader planned these tactical adjustments from the North Santander department which borders Venezuela. It was rumored that Londoño and Marquez, among other rebels, have received safe haven in the neighboring country, a point of contention between the Hugo Chavez regime and the administration of Alvaro Uribe.

Before becoming leader of the FARC, the only public sighting of Londoño in recent memory was a 2008 video in which the bearded guerrilla confirmed the death of his longtime comrade and FARC founder, Manuel Marulanda.

After the 2011 elimination of Alfonso Cano and Londoño’s subsequent promotion, Colombian President Juan Manuel Santos insisted that the leadership of the FARC would “fall like a house of cards.”  That never happened.

Instead, Londoño continued peace negotiations from Alfonso Cano with Santos’ brother Enrique, who had begun secret peace talks half a year earlier.

While the FARC’s #1 stayed in Colombia as the military commander of the group, other top-ranking members of the group took part in peace talks after they were made public and formal in 2012.

In November 2016, the peace talks culminated in a peace deal, FARC members stopped using their nom-de-guerres and Londoño returned to using his birth name.

The former military leader led the FARC’s demobilization in 2017 and was subsequently elected to become the presidential candidate of the newly found political party.

Londoño was forced to abandon the race over health issues and his since dedicated himself to leading the FARC as a political movement and political party.