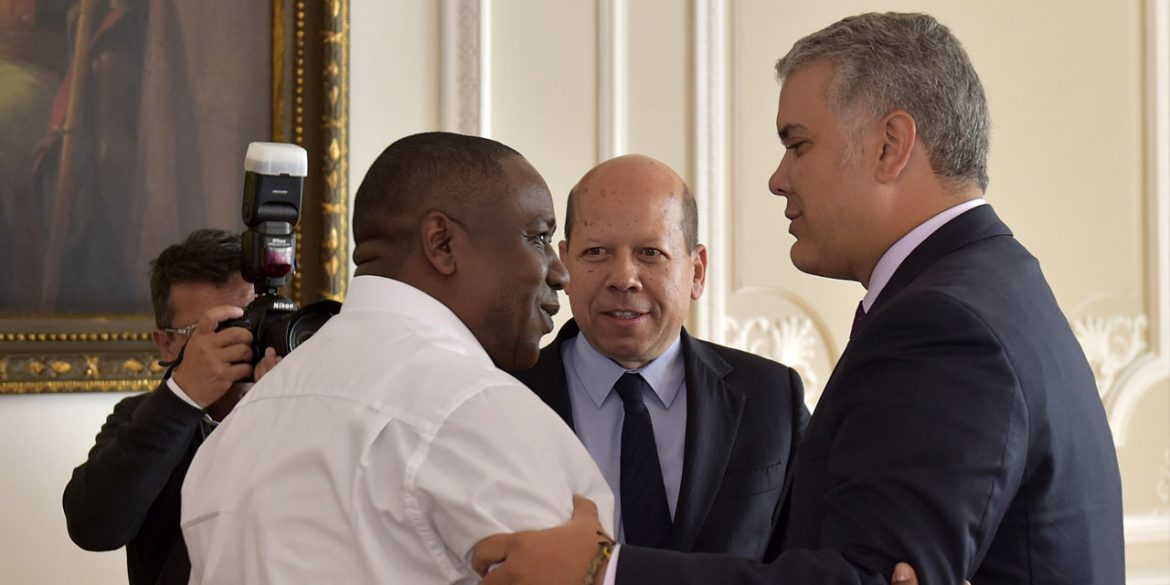 Deny this, Duque: ‘Colombia’s military is working together with narcos’

The military’s collusion with what the United States considers Colombia’s largest drug trafficking organization is undermining the government’s legitimacy, President Ivan Duque was told on Wednesday.

Victims representative Leyner Palacios made the bombshell accusation in a letter he personally gave to the president after a meeting at the presidential palace.

Duque had invited the victims representative from Bojaya, Choco, after paramilitary group AGC threatened to kill Palacios who lost 28 of his family members in a 2002 FARC massacre.

The social leader took the opportunity to leave in writing what many suspected for more than a decade, but multiple governments have consistently denied; Colombia’s security forces continue to work together with drug trafficking death squads.

The actions of the paramilitary groups of the AGC are carried out in collusion with the security forces based along the Atrato River and in many other sectors of the Pacific region, which undermines the legitimacy of a government that claims legality as a principle of intervention.

Ahead of the visit, the Army’s 7th Division announced “institutional confidence and reliability tests” amid the growing claims that it continues to work together with paramilitary groups while receiving American tax payers’ money to combat drug trafficking.

In the same letter, Palacios said that despite the military’s alleged collusion with paramilitary groups, guerrilla group ELN expanded its territorial control in northwest Colombia, “generating terror and an imminent risk for our communities.”

The social leader rejected the government’s claim that drug trafficking was the primary cause for armed conflict in the region.

“It is known that, apart from drug trafficking, conflict in the region has been associated with the imposition of industrial development, such as large-scale mining, palm oil agro-industry and large infrastructure projects” promoted by Duque and his far-right Democratic Center party.

The letter of Palacios tore the government’s “Peace with Legality” policy to pieces, implying that Duque was effectively imposing violence in collusion with illegal armed groups.

The victims representative had already announced he would demand the government to “urgently” implement a 2016 peace deal with demobilized FARC guerrillas that is fiercely opposed by Duque’s far-right Democratic Center party.

Palacios did exactly that, demanding that “everything agreed in the peace agreements is fully implemented in the region: the rural reform beginning with the [priority region development protects] PDET, the strengthening of the political participation of communities through the [16 congressional seats for war-torn regions], political reform, integrated protection for former combatants and communities, the substitution of illicit crops and the effective persecution of the drug trafficking chain.”

Duque did not make any public statement after having his ass handed to him by one of Colombia’s most prominent and respected victim representatives.