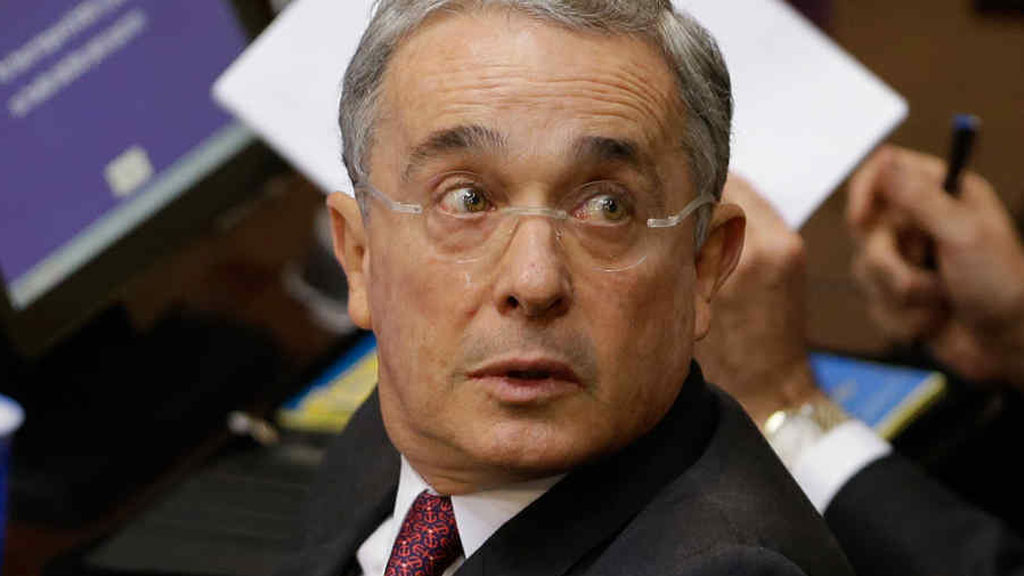 Following the sentencing of his former chief of staff and former spy chief on Thursday, former president Alvaro Uribe should be the next to be investigated for illegally spying on opponents, according to Colombia’s Supreme Court.

The scandal over illegal spying practices by now-defunct intelligence agency DAS dates back to 2008 when prosecution investigators began finding out that the intelligence agency had been spying on opposition politicians, the Supreme Court, human rights organizations and journalists.

The Supreme Court on Thursday sentenced Uribe’s then-chief of staff, Bernardo Moreno, and former DAS director Maria del Pilar Hurtado for having ordered and coordinated the spying on what seemed to be on persons and entities deemed inconvenient for the Uribe administration.

The scandal led to the dismantling of the DAS in 2011 and the incarceration of numerous intelligence officials including agents who hired civilians to plant bugs in the offices of the Supreme Court, the directors of both the Intelligence and Counterintelligence units, and recently one of its directors.

With the sentencing of Uribe’s former chief of staff, the court said it had become “indisputable that the DAS officials acted on behalf of the institution, whose managers — without doubt — followed illegal orders submitted to them by the Office of the President of the Republic.”

The DAS reported directly to the President’s Office.

Uribe responded on Twitter, regretting the sentencing of his former subordinates for “fulfilling their duty,” adding later he would respond to the court’s decision on Tuesday.

Uribe allies in Congress rejected the most recent sentences in the wiretapping case. Alfredo Rangel, a senator for Uribe’s opposition Democratic Center (CD) party, said the convictions were a “retaliation” and that the convicted former officials were “carrying out their jobs in a legal manner.”

CD Senator Paloma Valencia said the court had allowed the use of “testimonies of proven criminals to besmirch the main people of ‘Uribism’ and be able to persecute ex-president Uribe.”

However, according to the prosecution, the former president “organized a criminal structure with the purpose of neutralizing the people who were opposing him.”

The court — not convinced of the prosecution’s claim — ordered Congress’ Accusations Committee, the body in charge of criminal investigations against presidents, to formalize the wiretapping probe it began in 2010, but has so far not resulted in anything but one 10-minute appearance of Uribe before the commission.

Both Peñate’s predecessor and successor are already in prison.

Peñate’s successor, Hurtado, was sentenced to 14 years in prison for her role in the illegal wiretapping. Peñate’s predecessor Jorge Noguera –appointed DAS director by Uribe after his 2002 election and accused of having set up the spying scheme — is in prison for homicide.

Not all spying illegal

In its sentence, the court clarified that not all spying activities carried out on political opponents were unmerited and thus illegal.

The court deemed the spying on former Liberal Party Senator Piedad Cordoba and the wife of then-senator and now-Bogota Mayor Gustavo Petro merited. Cordoba at the time was suspected of ties to rebel group FARC while Petro’s wife allegedly had ties to the the administration of the late President of Venezuela, Hugo Chavez.

The DAS also had enough merit to investigate specific members of the court who the intelligence agency suspected of having collided with a businessman suspected of involvement in drug trafficking.

According to the court, the DAS abused these merited investigations to justify the illegal spying of a wide range of persons, entities and organizations.

What’s next for Uribe

Following the sentencing, the Accusations Committee of the House of Representatives will receive the evidence gathered by the prosecution and the court in order to advance the investigation against Uribe.

However, whether this will result in an actual is uncertain as the body has become infamous for being notoriously ineffective.

The investigative body has already been investigating Uribe’s alleged role in the illegal wiretapping since 2010, but without significant progress.

The committee absolved former President Ernesto Samper in spite of evidence the Liberal Party politician was elected president in 1994 using money from the now-defunct Cali Cartel in his campaign.

Congress is currently debating the dismantling of the Accusations Committee.