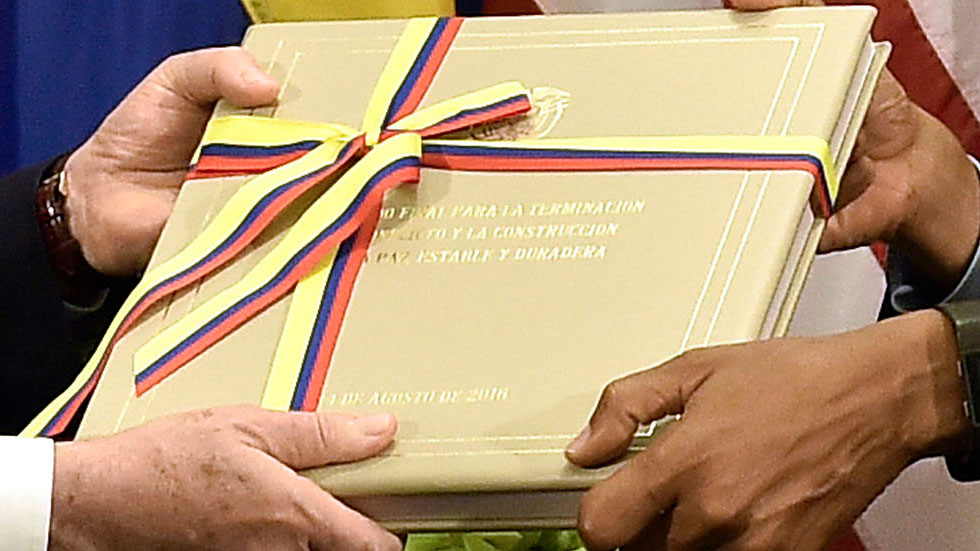 Colombia President Juan Manuel Santos and FARC leader Rodrigo Londoño are set to sign a peace agreement that follows more than five years to negotiate. Here’s how that went.

The initial approach was made as early as 2006 when former President Alvaro Uribe in secret asked businessmen Henry Acosta to seek contact with “Pablo Catatumbo,” then the commander of the FARC’s Western Front and highly regarded within the guerrilla organization.

A second negotiator, Swiss scholar Jean Pierre Gontard, was also said to have been authorized to talk to the FARC by the Uribe administration in that year.

Acosta achieved to make contact with the FARC and begin a preliminary negotiation, but the attempt failed in 2007 because Uribe sought the guerrillas’ surrender while the FARC wanted a negotiated peace between equals.

Uribe then sought the mediation of Venezuelan President Hugo Chavez and leftist Senator Piedad Cordoba, but also without success.

Then-Peace Commissioner Frank Pearl, as instructed by president Uribe, tried to initiate a peace process with the FARC again in 2008, according to President Juan Manuel Santos, who was Uribe’s defense minister until 2009.

The president called in the help of his brother, renowned journalist Enrique Santos, to join Acosta in secretly pursuing formal peace talks.

The first physical meeting between government representatives and the FARC, according to the guerrillas, took place in March 2011 near the Colombian-Venezuelan border.

Santos has claimed that then-FARC leader “Alfonso Cano” approached him personally to restart the talks. Santos agreed, but only if the talks remained “entirely confidential until [they] both decided when to go public.”

The death of ‘Alfonso Cano’

Because both parties were still at war and the peace talks were taking place in secrecy, the military and the FARC alike continued going after high-profile enemy targets.

The military killed Cano in November 2011, less than 10 months before the peace talks were formalized.

According to Cano’s successor, “Timochenko,” the air strike that killed Cano was a severe setback to the talks.

However, then Venezuelan President Chavez intervened and was able to convince the guerrilla leadership to continue negotiating, according to Timochenko.

Within days, Acosta told Reuters, the FARC leadership sent him a message: “Tell the president everything we have discussed stands, this does not affect the dialogue.”

From then on, the negotiators moved towards formulating the points on the agenda of the formal phase of the talks and in February 2012, the FARC renounced kidnapping as a token of the group’s commitment.

By August 2012, the talks were close to being formalized and were made known more widely within the government.

Former President Alvaro Uribe, who since leaving office in August 2010 had become a political enemy of Santos for both political and ideological reasons, received classified information about the talks and publicly announced that Santos and the FARC were talking on August 19, 2012.

While the Santos administration publicly denied Uribe’s rumor, the negotiators rushed to finalize the formalization agreement of the talks and Santos traveled to Cuba to sign the “General Agreement for the Termination of the Conflict and the Construction of a Stable and Lasting Peace” on August 27, according to the FARC.

A day later, the president confirmed that his administration had indeed been holding exploratory talks with the FARC.

On September 4, Santos appeared on television to announce that an accord had been signed to begin formal peace talks.

Timochenko appeared separately on television to confirm the agreement. While the FARC objected,

The Colombian government lifted 191 arrest warrants in order for 29 FARC negotiators and their assistants to participate in the talks that kicked off ceremonially in the Norwegian capital of Oslo in October.

The FARC’s negotiators traveled then directly to Havana, Cuba, where the talks would be held.

The government delegation returned to Bogota until November 19 when the formal talks began with a six-point agenda seeking to address the causes, aggravators and consequences of the conflict.

The negotiators agreed to hold the negotiations without declaring a ceasefire, much to the dislike of the FARC.

The administration of former President Andres Pastrana did agree to a ceasefire in 1999 and demilitarized an area the size of Switzerland, but those talks failed in 2002.

During the ceasefire, the guerrillas had taken major military advantages, which is why Santos rejected a ceasefire ahead of the talks.

This decision later proved an extremely risky one as high-profile attacks of the guerrillas ended up discrediting the talks and at one point even threatened to blow them up altogether.

The beginning of the talks were easy. As a sign of goodwill, the FARC declared a two-month unilateral ceasefire in the hope for reciprocation, but with no response.

When in late January 2013 the FARC’s ceasefire ended, the guerrillas took to the offensive and began a series of mutual attacks that would later undermine the continuity of the talks.

The two parties initially stuck to the promise that what happened on the battlefield would not influence what happened in Havana.

But when 19 soldiers were killed in a FARC attack, Santos allegedly was close to ending the peace talks altogether. It would not be the only time.

Disregarding the distortion from the battlefield, the first two points on the agenda, rural reform and political participation, were easily agreed. By the end of 2013, draft agreements on both points had been announced.

The deals sought to solve some of the main causes of Colombia’s armed conflict, extreme inequality on the countryside and the systematic exclusion of the left in politics.

During the negotiations, the government and the FARC decided to bot yet discuss the “End of Conflict” yet, but proceed with “The Problem of Illicit Drugs,” or the FARC’s participation in the country’s drug trade, which would be agreed on on May 16, 2014, only 18 months after the beginning of the talks.

While the negotiators were about to touch the most delicate points on the agenda, “Victims,” opponents of the talks began to conspire in an attempt to discredit the talks ahead of the 2014 elections in which Santos sought reelection, but former Uribe wanted a president of his own party, Oscar Ivan Zuluaga.

Uribe’s party, the Democratic Center, teamed up with a political hacker, Andres Sepulveda, and dissident elements within the military.

This information was then sold to Uribe’s party that would leak classified information to undermine the credibility of the talks.

The strategy almost worked and Zuluaga won the first round of the elections. However, Santos’ efforts to negotiate out of a war was so broadly supported in Congress that the leftist coalition urged its constituency to vote for Santos, who won the second round.

Additionally, with only five days before the elections, Santos and the ELN, Colombia’s second largest rebel group, announced they were also engaged in preliminary peace talks.

This pushed the electoral preference to Santos’ favor and he defeated Zuluaga in the second round.

Since then, the Democratic Center has found itself in increasing legal trouble over the illegal spying and the making public of classified information.

The negotiators had earlier agreed to postpone negotiating End of Conflict until later, which proved one of the most controversial decisions.

The two negotiation teams needed only 18 months to come to agreements on rural reform, political reform and drug trafficking, but how to actually end the war and provide justice for victims proved much more difficult.

Ultimately, “Victims” and “End of Conflict” would take the negotiators 28 months.

The negotiations on victims partly took some time because victims were asked to actively participate in the proposition of the deal. In Colombia, three victim forums were held and the representatives of 60 victim organizations were invited for input.

While negotiators were stuck on the subject in Havana, violence in Colombia escalated and threatened the continuity of the talks.

In order to prevent the talks from failing, the FARC announced a unilateral ceasefire and the government announced an end to airstrikes.

But on April 15, a FARC unit in western Colombia surprisingly attacked a nearby stationed military unit, killing 11.

The incident spurred Santos to resume airstrikes after which the FARC ended their unilateral ceasefire.

The commanders of the military unit were later sacked amid growing rumors both they and the guerrilla unit had been working for local drug traffickers.

The foreign guarantor countries, Cuba and Norway, were able to convince both the FARC and and the government to agree to “de-escalation measures”

The FARC almost immediately stopped all attacks and the military gradually reduced the attacks on FARC camps.

In November, FARC leader “Timochenko” said the FARC would no longer be purchasing weapons.

By December 2015, a year after victims were first discussed, the FARC and the government announced agreement on this crucial point.

But the deal spurred public resistance because, rather than prison, war criminals who fully cooperate with justice would be granted alternative “restrictions of liberties.”

At the same time, the agreement received praise for another clause that obligates guerrillas and members of the military convicted of crimes to repair their victims by physically repairing the damage they had caused.

Since then, both the FARC and the government have made several visits to victims to ask forgiveness for war crimes committed by both warring parties.

The end of conflict game

Once agreement on victim reparation and justice was found, the talks entered a rapid.

Timochenko ordered an end to the recruitment of underage FARC fighters in February and agreed to the release of child soldiers ahead of a peace deal.

Colombia’s congress began the preparations of legislation necessary to allow the FARC’s demobilization and by June 23, in front of international press, Santos and Timochenko shook hands on a definite bilateral ceasefire, effectively ending the armed conflict.

On August 24, the negotiators formally unveiled the agreement to end 52 years of conflict that has left more than 265,000 Colombians dead, 45,000 missing and 7 million displaced.

Santos announced that the deal would formally be signed on September 26 in Cartagena and put before the Colombian public in a referendum on October 2.