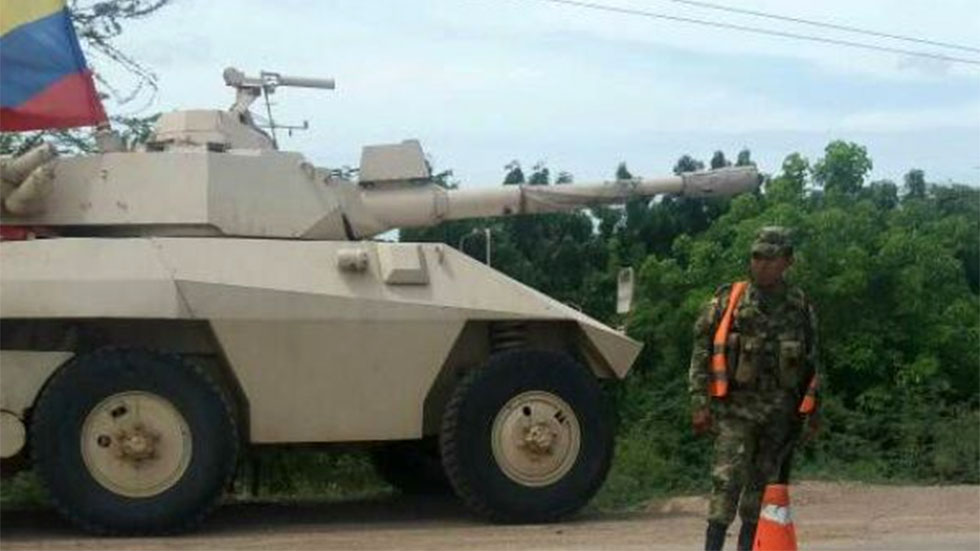 Tensions between Venezuela and Colombia have risen again after Caracas called the presence of tanks on the countries’ joint border a “provocation.” Bogota responded the tanks have been there since 2015.

According to Venezuelan state news outlet TeleSUR, its government claimed that Bogota had sent the tanks to the border in the northern La Guajira peninsula on Sunday.

“This is not the first seemingly aggressive action by the Colombians. Less than two months ago, on March 31, Colombia security officials were gathered near the Simon Bolivar International Bridge in Cucuta,” the Marxist state-run news outlet said early Monday.

Venezuela’s Foreign Ministry on Sunday expressed “its most energetic rejection of the unacceptable provocation carried out by the Republic of Colombia with the presence of armored combat vehicles at just meters from the border with Venezuela, today en Pachaguachon, province of La Guajira.”

Colombia’s government dismissed the claims on Monday, saying the tanks had been stationed along the border since 2015 “in the execution of agreements between military authorities of both countries.”

Bogota added that the tanks “will stay there to carry out normal territorial control, in agreement with the constitutional duties of the security forces.”

The claims of a Colombian provocation came a day after Colombian President Juan Manuel Santos returned from the United States where he had been invited to meet with US President Donald Trump.

Weeks earlier, Venezuelan troops set up camp on the Colombian side of the Arauca river, the natural border between the two countries in the northeast of Colombia, spurring Bogota to accuse Caracas of provocation.

The latest accusation of provocation comes at a time tensions are extremely high in both countries.

Following the partial repeal of the Constitutional Court of Colombia’s approval of a peace deal with Marxist FARC rebels that came into force in December last year, the ongoing peace process entered in crisis last week.

Coincidentally, Venezuela entered its 50th day of political violence between the increasingly autocratic Marxist government of President Nicolas Maduro and a coalition of opposition parties that, according to BBC News, has killed 48 to date.

The Santos administration has long gone out of its way to avoid and evade tensions with Colombia’s increasingly unstable neighbor, but withdrew its ambassador on March 31, the day TeleSUR claimed Colombian soldiers gathered near the countries’ main border crossing in the border city of Cucuta.

Since then, Colombia joined a coalition of 11 Latin American countries who all called on Venezuela to seek effective ways to deescalate political violence, while offering to mediate and seek a negotiated end to the violence in Venezuela.