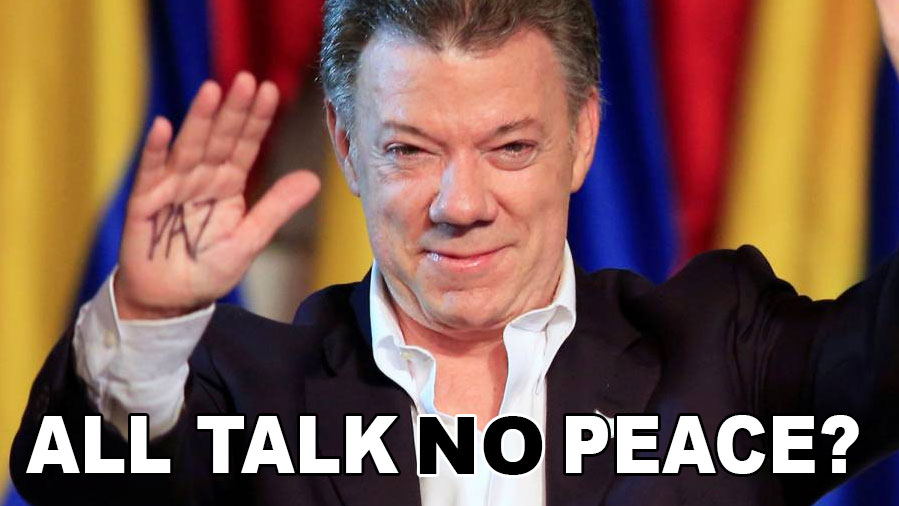 The crisis was spurred by the shock retraction of the Constitutional Court of the so-called fast-track mechanism that was included in the peace deal to legally protect the government and the FARC’s compliance to the pact.

Instead of protecting the peace agreement from being either sunk or corrupted by congress or future administrations, the ruling opened the door for congress to reject parts of the peace deal that is already being executed, undoing years of negotiations and international mediation.

The shock ruling, announced just hours before Santos met with his US counterpart Donald Trump, was the “death blow” of the FARC’s confidence in the government’s ability to effectively execute the peace deal signed on November 24, according to weekly Semana.

Santos’ former peace negotiator, politicians from across the spectrum, the FARC and minority organizations immediately rang the alarm, warning the peace process was about to collapse and paramilitary and drug trafficking violence was at the point of exploding.

Indigenous organization MPC sent out a press release, announcing they abandoned the process, claiming the national government’s inability to keep its word “weakens and threatens the implementation of the Final Peace Deal.”

The government on numerous occasions has failed to comply with deadlines, while the process has been fiercely resisted by a hard-right minority opposition centered around former President Alvaro Uribe and his Democratic Center Party, powerful dissident elements within the military, paramilitary groups, ELN guerrillas and drug traffickers alike.

We have witnessed the very bitter experiences because of the state’s breaches of the agreements with those who were in arms. Add to that picture the activity of a political movement, the Democratic Center, which says it’s right-wing and will shred the deal to pieces, “the fucking deal” to use the exact phrase.

While Uribe’s party has become increasingly militant, it has been an accumulation of factors that have escalated tensions to a boiling point.

The resurgence of groups Uribe claimed to have demobilized, chronic state neglect, violent social protests, the apparent increase in killings of community leaders or presumed leftists, and most recently the assassinations of family members of demobilizing FARC guerrillas, have all contributed to the crisis.

When the court announced its verdict. FARC leader Rodrigo Londoño, a.k.a. “Timochenko,” immediately ordered the FARC’s 7,000 guerrillas to enter a “permanent assembly,” Marxist jargon for either a strike or an occupation.

Since then, the UN Mission in Colombia, which oversees the process, has remained quiet.

The president told media he trusted Congress would approve made agreements, in spite Congress’ embarrassing inability to pass legislation, even with a fast track mechanism.

Is Colombia’s congress also dropping the ball on peace?

Santos’ former chief negotiator in the peace talks, Humberto de la Calle, called the president “naive” and urged the president to use the transitional mandate he has until the end of month to make sure the state doesn’t fail in executing the peace agreement Santos had been awarded a Nobel Peace Prize for in October last year.

The State in its entirety has the obligation to comply with what has been agreed, because it was underwritten by the executive branch, ratified by Congress and along the same line by the Constitutional Court itself.

FARC: from impatient to in panic

Half a year after signing peace, the government has failed to construct the formal camps in which the guerrillas were supposed to be held. The UN is now overseeing camps built by the guerrillas themselves.

The majority of the guerrillas’ weapons caches are still in the jungle, because the government has failed to provide the containers to keep the abandoned weapons. Ultimately, the UN jumped in and delivered temporary boxes so that guerrillas at least could surrender their handguns.

However, Colombia’s military has failed to effectively take over FARC-controlled territory. As a consequence, a major power vacuum occurred and other illegal armed groups took territorial control with deadly consequences for both community leader and policemen.

To the embarrassment of the National Police, it was slapped on the wrist by the ombudsman for failing to act on a year-long killing spree targeting policemen, allegedly by the AGC. Marxist ELN guerrillas have been killing cops since 1964.

The governments of both Santos and Uribe have consistently denied the existence of paramilitary groups since the demobilization of the AUC in 2006, and have focused mainly on the Marxist guerrillas.

Unknown actors began killing demobilized FARC members and family members of guerrillas last week and, according to Londoño, paramilitary groups have now appeared within sight of the encamped guerrillas and United Nations personnel.

In an open letter to the president, the FARC leader — now using his nom-de-guerre “Timoleon Jimenez” — said that illegal armed groups with apparent military support have been organizing community meetings in areas near the camps where the FARC has been concentrated, and urged immediate action.

These alleged meetings had earlier been denounced by coca farmers in former FARC territory for months, but left unattended by the military.

The people that are part of these groups are on average 20 years old, are properly uniformed and are carrying brand new arms. In the meetings to which the farmers are summoned, they are told not to worry, that they won’t oppose the peace process or the FARC’s abandonment of the region, that they won’t impose taxes, but that they will stay to take control of all activities. It is obvious they are after the illicit coca plantations and the drug business. Such swift deployment is inexplicable without the help of military authorities. You can thus understand the tremendous concern of the FARC over the most recent Constitutional Court rulings.

Londoño vowed the men and women under his command would “defend peace and truth” and that “the Colombian people will accompany us. We are waiting for you to act, Mr. President, honor your word. We will honor ours.”

The Colombian people, meanwhile, have begun rising up, fed up with the state, run by a power-wielding Bogota elite that Santos has become the personification of.

Only weeks ago, Uribe mobilized tens of thousands of people to protest against the peace deal and the government.

Last week, unions and minority organizations mobilized hundreds of thousands went on strike to protest the government, demanding an end to chronic state neglect and the chronic failure to deliver on made promises in regards to poverty, substandard labor conditions, corruption and the armed conflict.

The problem is that Colombia’s state system is so corrupt and inefficient, the only visible option for Santos to deliver peace is using the transitional mandate, remove the peace legislation from Congress and decree peace himself.

However, at that point there is no way back between himself and the transitional justice court. While, according to the Prosecutor General’s Office, the military killed more than 1,000 civilians, Santos was defense minister under his now-rival, former President Alvaro Uribe, a hard-right opponent of peace with the FARC and accused of being responsible for even more civilian killings.

During the more than half a century of war, the drug-fueled armed conflict has degenerated all involved parties to the point that now 24,500 state officials, including the president, who have either charged or convicted for war-related crimes.

On top op that, more than 12,000 private companies and individuals, including Uribe’s brother, face terrorism charges for financing anti-communist paramilitary death squads, involved in both drug trafficking and an establishment-friendly offensive against the FARC.

FARC took care of its army, not the people

Because the ruling is not retroactive, it can neither be applied to the already approved amnesty law, the transitional justice system, nor the FARC’s political participation.

The guerrillas were never naive, and made sure the legislation securing their interests passed through Congress first.

The legislation pieces at stake are the ones to actually tackle the numerous causes of political violence, including the state’s ties with either paramilitary or drug trafficking groups, chronic state neglect, corruption, and the systematic exclusion of minorities.

Far-stretching rural reforms, political reforms and other bills will now have to be debated and voted on by the Senate and the House of Representatives and its relevant commissions at least seven times. Amendments can be made in each voting round.

The problem with Colombia’s Congress is that congressional elections are held in less than a year, and Congress is so corrupt lawmakers would literally extort the president to seek national funds for their home districts and campaigns.

“The government has indicated that in response to what happened it would solidify the political coalition, which is fine, I understand, but this doesn’t minimize the risk of an extremely tortuous debate, and sends a message that to me looks very bad, not just to the guerrillas, but to Colombian society in general.

The president is now presented with the unprecedented fact he has been unable to deliver the peace he received a Nobel Peace Prize for. The international community is watching.

De la Calle has lost confidence the state alone is able to comply with its commitments and has called for a broad extra-congressional coalition to force the state into compliance.

The government says the answer in the majority, the coalition, but in practice let’s not be naive. Making this happen in detail is going to generate enormous controversies and because of that I think it is appropriate to not just form one in Congress, but in society, an enormous coalition of all who are defending the process. We are protecting peace that has only just been born, an enormous coalition could allow us to continue, not so much in regards to debating the deals, but to future development and the transformation opportunity the agreement and the defense of authentic Rule of Law, following the liberal philosophy and the respect of difference, of the fight against authoritarianism, against religious fanaticism, all this is at stake, the essence of a tolerant and open society.

With Uribe already having failed to deliver peace, a similar failure by Santos could put Colombia back at the brink of being a failed state, overrun by unhinged political and criminal violence.

When the government failed to deliver peace in 1985, it marked the beginning of a political genocide. After the AUC demobilized in 2006, 2,000 paramilitaries were assassinated. If Santos also fails, the consequences are almost impossible to conceive.