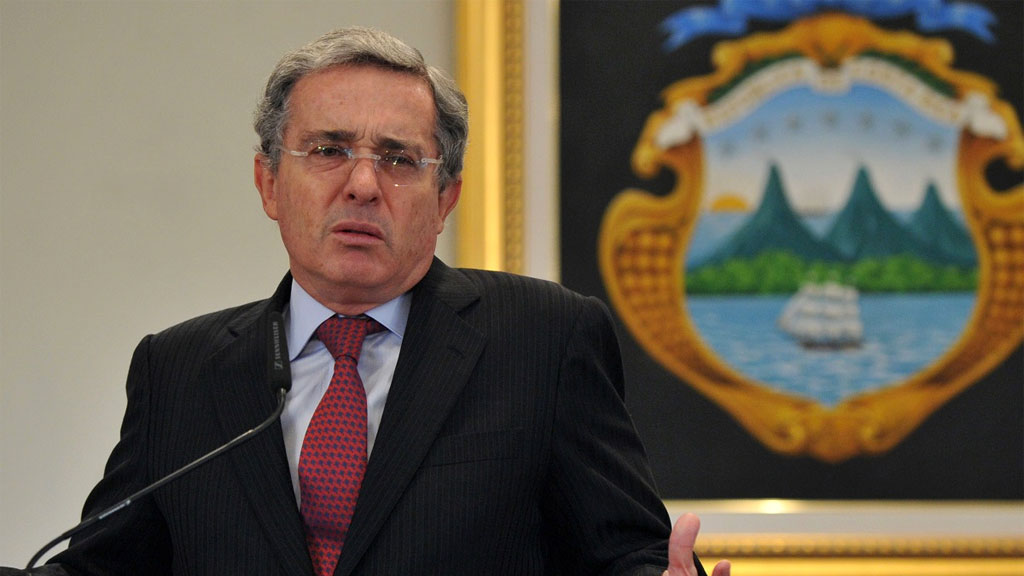 Colombia’s Congress has disallowed former President Alvaro Uribe to travel to the United States where he hopes to garner political support for his opposition to ongoing peace talks with leftist rebels.

Congress will return from winter recess on Monday to debate the government plans for the coming four years.

But Uribe and four of his fellow Democratic Center lawmakers had requested permission to skip one of the most important debates of the congressional term for more urgent matters for the opposition party.

According to Uribe and his allies, they have become the target of a political persecution over their political opposition to ongoing peace talks with rebel group FARC that is impeding them from freely carrying out their opposition.

Uribe to visit US to meet lawmakers over Colombia peace talks: Report

Congress president Jose David Name on Friday made clear he wouldn’t allow members of congress an exceptionally long leave during the first two weeks of the second leg of the congressional year as they are expected to vote on the government’s four-year development plan.

“We need to work. It’s what Colombians pay us for,” said Name, who explained that “we have been called to attend the extraordinary sessions that have to take place between February 6 and March 15. As such, no Congressman can leave the country” until at least after Tuesday.

Newscast CM& explained that the extraordinary plenary session on Tuesday is obligatory for all lawmakers and that no members of the Senate’s 3rd Commission is allowed to leave the country. However, this is no issue because none of the opposition lawmakers who were set to travel abroad make part of that commission.

Democratic Center Senator Ernesto Macias accused the congress president of using a double standard. “The plenary sessions are empty here and they say that many live traveling. There are congressmen who live abroad more than they do here.”

Consequently, the opposition party lawmakers said they will disobey the order. “The Democratic Center has an agenda abroad it will fulfill. We are going to use our own funds. We will not ask Congress for one penny,” said Macias.

According to Senator Paloma Valencia, the extraordinary sessions were called “to avoid Democratic Center leaving the country.”

The Senator showed photos from a session held on Saturday that demonstrated that most seats in Congress supposedly occupied by the president’s governing coalition were empty.

Uribe’s defense to go abroad to seek support for his opposition led to accusations of the former president’s own alleged double standards.

Horacio Serpa, a long-time political rival of Uribe, reminded the former president that “during the Uribe administrations he said that talking outside the country about things happening inside the country … was almost a crime against the nation.”

Serpa referred to former Senator Piedad Cordoba who Uribe’s allies accused of treason for trying to rally support against the then-president for his alleged ties to paramilitary groups and against a now-approved free trade agreement with the United States.

“Uribe moaned and moaned because I went to the US to denounce the FTA (which broke the farmers) and now he is going to Washington to attack peace,”  the former Senator, who was later controversially removed from office over alleged ties to the FARC.

Additionally, Cordoba took a swing at Uribe for almost having her tried on treason charges when she called for sanctions against Colombia over the infiltration of paramilitary organization AUC in the administration and Congress.

However, for the Uribe-loyal bench in Congress, the obligatory session in the first workweek of Congress is evidence of the political persecution the party wants to expose abroad.

The party has seen a number of high-profile members, including Uribe, investigated and even sentenced for political crimes, involving the illegal wiretapping of the Supreme Court, ties to paramilitary groups, fake demobilizations of guerrilla units, the embezzlement of public funds and illegal spying of the ongoing peace talks with leftist rebel group FARC for partisan purposes.

The Democratic Center have rejected all charges, insisting they are the victim of a political persecution.