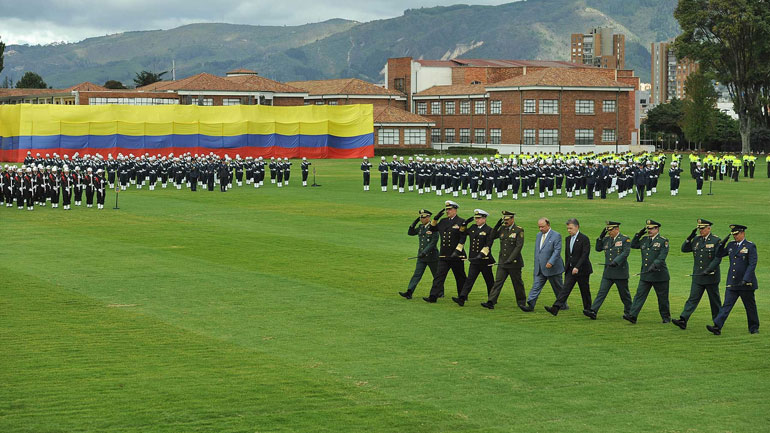 As many as 24,000 Colombian state agents are implicated in war-related crimes and could benefit from a transitional justice deal if peace with FARC rebels is reached, the prosecution office said Monday.

According to vice-Prosecutor General Jorge Fernando Perdomo, some 24,400 state agents are linked to some 10,400 crimes.

Of these criminal cases, 3,500 are pending and implicate 12,900 state agents, including members of the security forces, and (former) elected or appointed officials, Perdomo said.

According to the vice-Prosecutor General, some 11,600 state agents have already been either convicted or absolved. Those who have been found guilty of war-related crimes or want to appeal sentences can retroactively claim benefits agreed in a recently closed victims deal.

The 24,000 officials would add to approximately 20,000 guerrillas and guerrilla supporters the prosecution expects to try in the event of a peace deal with guerrilla groups FARC and ELN.

‘More than 20,000 to demobilize in event of peace with FARC and ELN’

The guerrillas and the state agents will receive a differentiated approach in regards to the tribunal.

In the case of both guerrillas and officials, those who have not committed war crimes or violations of humanitarian law will be pardoned.

Those who do face war crimes charges will be tried under a special law designed to bring some type of justice to the approximately 7.4 million victims left by the 51-year-long conflict.

If convicted, members of both sides will be sentenced to limited periods of “restricted liberties” defined by the transitional justice courts.

Guerrillas will be allowed to repay their victims by performing forced labor in victimized communities. The government has yet to make public how crimes committed by officials and civilians should be repaired.

Defense Minister Luis Carlos Villegas and Justice Minister Yesid Reyes said Saturday that the government will announce this before the end of the peace talks.

Presidents cannot be tried and judged before the transitional justice tribunal for alleged crimes committed during their time in office , but can be tried by Congress if the court refers a case.

Several victims have already raised questions about how they will be compensated by their victimizers.

The FARC has insisted it does not have money in spite of their involvement in lucrative criminal businesses like drug trafficking, extortion and illegal mining.

The victims deal and its chapter on transitional justice are draft agreements that will form a peace deal if one is reached between the administration of President Juan Manuel Santos and the FARC, Colombia’s largest and longest-living rebel group.