One week before Colombia’s presidential election, hard-line candidate Oscar Ivan Zuluaga struck a deal with striking farmers on Sunday, strengthening his already strong electoral base in rural areas in the center and central southwest of the country.

The deal was signed with regional chapters of the Agricultural Dignity movement in the states of Huila and Cundinamarca where Zuluaga’s rival, incumbent president Juan Manuel Santos faced fierce rural protests over an economic crisis on the countryside.

Subsequently, Zuluaga came out on top in the states where he tried to consolidate his already dominating electoral power. The most prominent Dignidad movement, from the central Boyaca state, apparently refused to express its support for the hard-line candidate in spite of being a stop in the campaign.

In order to receive the endorsement from the farmers, Zuluaga vowed to prioritize rural reforms and agreed to a ten-point action plan that would improve the living conditions of the mostly poor farmers. 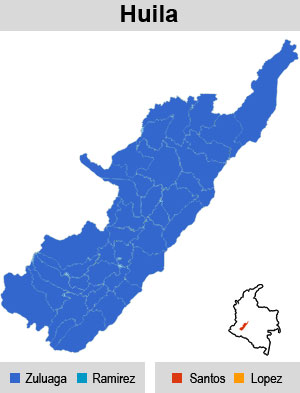 1st round voting behavior in Huila

In the Huila state, where farmers violently clashed with police in August last year, the president received only 11.4% of the votes while Zuluaga received 46.4%. However, abstention in the state was as high as in the rest of the country with almost 60% of the voters staying home for the first round.

Zuluaga is relatively secured that the majority of 14.5% of voters who voted for Conservative Party candidate Marta Lucia Ramirez will vote for the hard-line candidate after a 2nd round endorsement coming from the candidate who has moved away from her party that endorses Santos.

However, the runner-up in Huila’s first round was the leftist Clara Lopez of the Democratic Pole party. Citing Zuluaga’s presumed inability to successfully bring peace talks with the country’s largest rebel group, the FARC, to an end, Lopez and other prominent leftist opposition politicians decided to endorse Santos.

It is uncertain however, to what extent farmers in Huila are willing to vote for the president who they say broke promises to alleviate the economic situation in the countryside on two occasions and is generally blamed for the allegedly disastrous effects of a trade pact with the United States on the rural community. 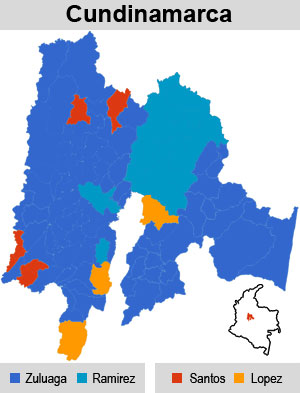 1st round voting behavior in Cundinamarca

The situation in the relatively populated Cundinamarca state with a voter potential of 1.7 million and geographically tied to the capital Bogota.

While Zuluaga came out the clear winner in this state, it will be more difficult convincing traditional Cundinamarca Conservative Party voters because of their historic alignment with the party, rather than the candidate.

Additionally, in a number of municipalities bordering Bogota, the electorate expressed a clear preference for Lopez, whose supporters in polls have indicated to be voting for Santos in the second round.

In municipalities where Santos won, the incumbent did so with a minor advantage over Zuluaga. There is no saying whether the support of Ramirez or Lopez can make a significant difference there.

Santos, his running mate German Vargas and leftist opposition leader Clara Lopez had also come to Tunja, the capital of Boyaca, to rally support for the incumbent reelection bid.

MORE: Santos apologizes to farmers over strike denial as campaign comes to end

Zuluaga failed to make a deal with farmers in the Boyaca department where anti-government protests were strongest in August and May, and whose leaders have taken the most prominent role in negotiations with the government regarding the economic situation.

Rural leader Cesar Pachon has publicly rejected the election of both Santos and Zuluaga to the second round, claiming both had little interest in good governance.

Zuluaga’s political patron, former President Alvaro Uribe, was boo-ed from the capital Tunja while rallying support for his protege a few months ago.

Both candidates ended their campaigning on Sunday as electoral law does not allow rallies in the seven days ahead of the elections.

Polls that were released on Friday indicated contradictory possibilities for Sunday’s electoral outcome; One pollster said Santos was clearly leading the race, another said the same about Zuluaga, while a third said both candidates were tied.