In one of his last campaign rallies, Colombia’s incumbent president Juan Manuel Santos apologized to farmers in the Boyaca state on Sunday for having denied the existence of rural strikes that hit the rural northeastern state particularly hard in August last year.

Santos made the apology in Tunja, the capital of Boyaca, where hundreds of his supporters had gathered.

In august last year, when hundreds of thousands of farmers, miners and truckers laid down work, Santos publicly stated that “this so-called strike doesn’t exist.”

The comment caused a wave of criticism and Santos’ subsequent handling of the strike spurred a dramatic drop in his approval rating he has since not been able to recover.

“I was wrong when I said those words,” admitted Santos in Tunja. “I wanted to say something else than what I actually said, and for that I offered my apologies and I offer my apologies again. I was wrong,” the president said.

The president, dressed in a traditional ruana overcoat with a campaign logo on it, attempted to regain confidence and voters in the state where new strikes were suspended for the duration of the elections. Local rural leaders have claimed the president had failed to live up to promises made to end last year’s strikes.

Santos reminded he had already promised increased funds for agriculture and promised a further increase in aid to support the rural economy. 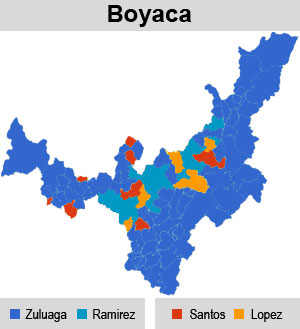 1st round voting behavior in Boyaca

Santos and his running mate, senior politician German Vargas, were accompanied by former presidential candidate Clara Lopez of the leftist Democratic Pole party who has been endorsing Santos in efforts from the left to force the continuation of peace talks with the country’s largest rebel group, the FARC.

Lopez, a strong critic of the economic policies of Santos and his hard-line rival, Oscar Ivan Zuluaga, was able to gather 84,000 Boyaca votes in the first election round and is now trying to persuade her followers to vote Santos rather than Zuluaga, who has been trying to seal a pre-election deal with local farmers in a last attempt to persuade rural voters.

The leftist leader was trying to persuade her supporters of setting aside differences with the incumbent in order to secure success of the ongoing peace talks she claims will fail if Zuluaga is elected head of state.

Santos himself, also tried to focus his campaign on the peace talks, claiming he was approached by one Boyaca farmer who allegedly told the president that “we, the farmers have contributed most deaths, because of this we will vote for you.”

Zuluaga however failed to make a deal in Boyaca where anti-government protests were strongest in August and May, and whose leaders have taken the most prominent role in negotiations with the government regarding the economic situation.

Rural leader Cesar Pachon has publicly rejected the election of both Santos and Zuluaga to the second round, claiming both had little interest in good governance. According to the rural leader, “both candidates represent the continuity of the neo-liberal model that’s killed us.”

Zuluaga’s political patron, former President Alvaro Uribe, was boo-ed from the capital Tunja while rallying support for his protege a few months ago.

Nevertheless, Zuluaga’s political support in Boyaca strengthened after the endorsement of former Conservative Party candidate Marta Lucia Ramirez, who received 83,000 votes in the first round.

Both candidates end their campaigning on Sunday as electoral law does not allow rallies in the week ahead of the elections.

Polls that were released on Friday indicated contradictory possibilities for Sunday’s electoral outcome; One pollster said Santos was clearly leading the race, another said the same about Zuluaga, while a third said both candidates were tied.