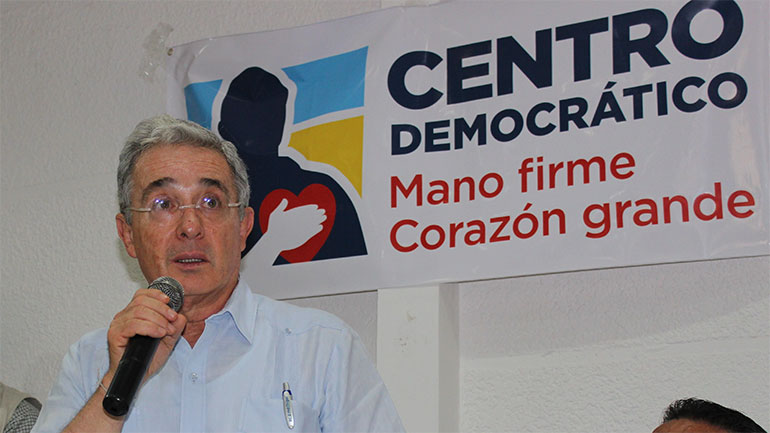 A group of mothers whose sons were murdered by the military sued former President Alvaro Uribe for slander after tweeting the victims were criminals.

Uribe, who is already facing a Supreme Court investigation for his alleged complicity in a paramilitary massacre, tweeted in June that he had met with the mothers of victims from the central Colombian city of Soacha.

According to Uribe, “some told me that their sons unfortunately were involved in illegal activity, which does not justify assassinations but the hypothesis has not been tested by justice.”

Four of the victims’ 11 mothers were indignant about Uribe’s claim and filed a slander lawsuit on Friday.

“He marks our sons as thugs while he never knew them,” Marila Ubilerma Sanabria, whose 16-year-old son was killed, told Caracol News. “They were killed by the state … By people who supposedly protect us, but instead are killing us,” the woman added.

The former president was commander in chief when the military executed thousands of Colombians and reported them as guerrillas killed in combat in order to receive benefits and effectively inflating the military’s success in sighting guerrillas.

When the inappropriately-dubbed “false positives” scandal broke in 2008, Uribe said that the victims from Soacha “were not going to pick coffee. They went with criminal purposes.”

Criminal investigations, however, found out that the Soacha victims had been told they were picked up for a job by a civilian intermediary, then delivered to and executed by members of the Army’s 15th Brigade, buried in a mass grave hundreds of miles from their homes and ultimately filed as guerrillas killed in combat.

In the years Uribe was president, these executions multiplied from a few dozen a year to hundreds a year in 2007. The practice became most prevalent between 2006 and 2008 when current President Juan Manuel Santos was Defense Minister.

The mass killings put both Santos and Uribe at risk of being called to justice over war crimes in the event of peace with leftist FARC rebels.

As part of a pending peace deal, the Santos administration and the guerrillas agreed to a truth commission and a transitional justice tribunal that must comply with international law.

Both entities will independently try to determine who is responsible for the millions of victims left during more than 50 years of armed conflict between the state and the FARC.