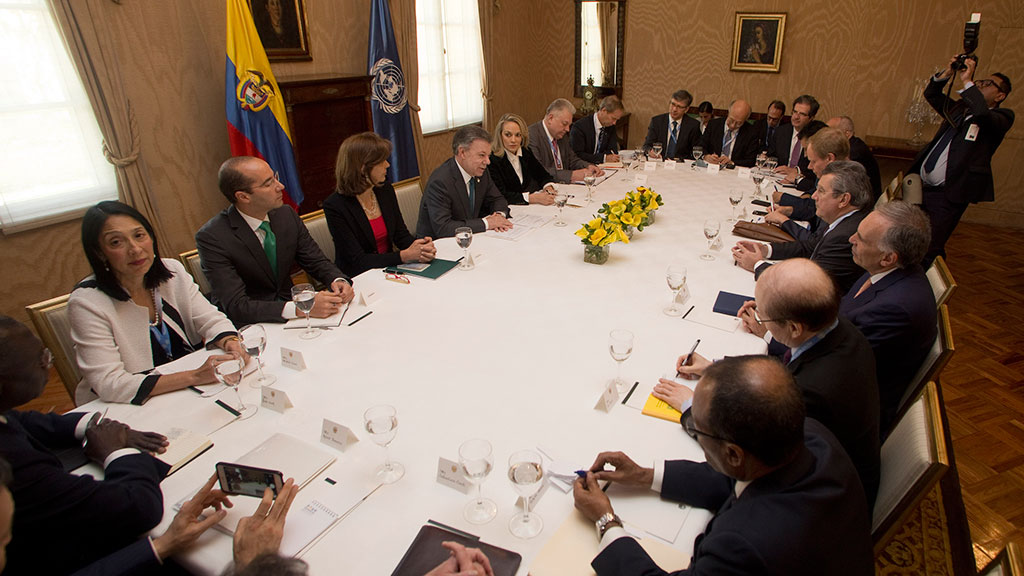 Despite major challenges and the kidnapping of a United Nations employee, the UN Security Council “unanimously and solidly” continues to support Colombia’s peace process.

We want to be very clear, Mr. President. The Security Council has come to Colombia to demonstrate its unanimous , solid and sustained support for the Colombian peace process.

While international support is high, Colombia is strongly divided about the peace process and has powerful opponents in politics and the military.

The Security Council made it about as clear as it could that it stood firmly behind Santos, who is struggling to get the public behind peace after more than half a century of war.

“The government, the [formerly warring] parties and the people of Colombia can count on the full support of the Security Council,” reiterated the United Kingdom’s representative Matthew Rycroft.

The top UN visit was marred by the kidnapping of an employee of the UN’s Office on Drugs and Crime (UNODC), allegedly by FARC dissidents, in southern Colombia.

Ahead of the flight from New York to Bogota, the 13 of 15 members of the Security Council knew it wasn’t going to be a standard visit.

It had been briefed about ongoing delays, security issues, and both social and political resistance to the peace process.

Additionally, the council knew both Santos and the demobilizing FARC guerrillas have asked for a three-year extension of the UN’s 180-day mandate to monitor the process.

Following the meeting with Santos, the ambassadors met with social leaders, NGOs, the United Nations’ team in Colombia, members of the Tripartite Monitoring and Verification Mechanism, and women’s organizations at the UN Mission headquarters in the capital.

According to its agenda, the Security Council on Friday will visit one of the FARC demobilization sites.