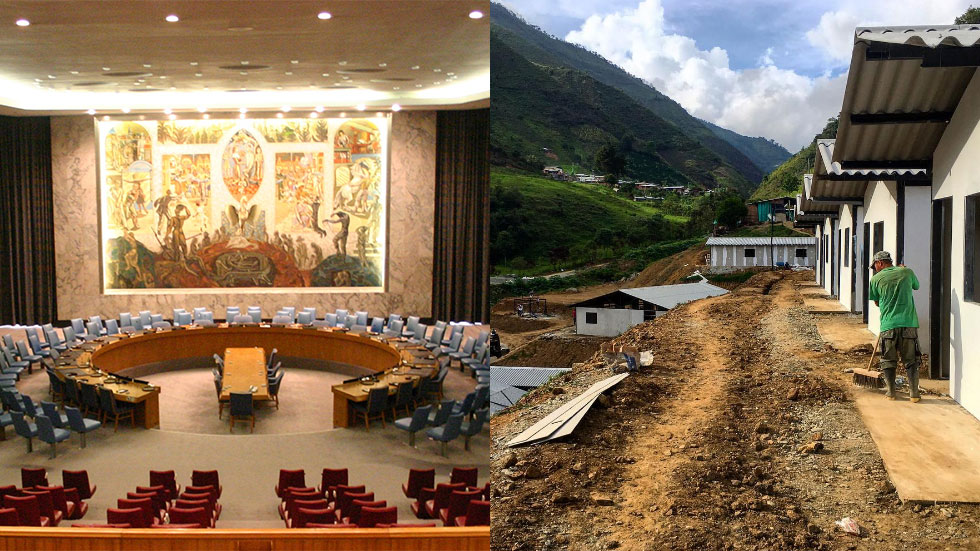 The United Nations’ Security Council will visit Colombia next week to be informed on the country’s ongoing peace process and consider a three-year extension of its monitoring mandate.

The council has actively monitored the peace process since December 1, when a peace process between the state and Marxist FARC rebels took force.

However, the process has been marred by delays, the killing of community leaders and a surge in criminal and paramilitary activity.

Hundreds of UN observers have overseen the ongoing demobilization and disarmament of the FARC. Additionally, the international body monitors the government and FARC’s commitment to the November 2016 peace agreement and investigates alleged breaches of the peace deal.

The ambassadors will visit Santos in the presidential palace in Bogota, which he said is “a major support for Colombia’s reconciliation process.”

According to the Security Council, however, the visit is not just to stress its commitment to the peace agreement, but said to “expected” to be informed on ongoing delays in the process, the killing of community leaders and the ongoing activity of paramilitary groups that according to the government  demobilized between 2003 and 2006.

The council also expects to talk about a possible second UN mission “with a mandate to verify the reintegration of ex-combatants and their protection, including from paramilitary groups. According to the agreement, this mission, which would be deployed after the current mandate ends, would have a three-year duration.”

According to the UN, this second mission has been requested by the Colombian government and the FARC.

Most imminently, the security council said it would “assess progress as the 180-day deadline established in the agreement for the laying down of weapons approaches (1 June).”

This process has faced several delays, particularly related to the transfer of FARC-EP combatants to the 26 Transitional Local Zones and Points for Normalization. Even though the laying down of weapons has started in temporary camps, the government has committed to finalizing the infrastructure of the remaining zones and points by the end of April.

According to local media, the government and the FARC are considering converting the camps to “peace villages” from where former guerrillas are able to carry out reintegration activities or be held while awaiting trial in case they are suspected of grave war crimes.

Why the camps are not ready two months before they are supposed to be abandoned is not the only tough question Santos will be asked when visited by the ambassadors at the Casa de Nariño in Bogota.

Since the peace deal came into force on December 1, 31 community leaders and social leaders have been assassinated as, according to local officials, the military has been “slow” and “inefficient” in entering the vast and remote FARC areas to impose state authority.

The human rights situation in Colombia is expected to be addressed during the visit. The UN and NGOs have condemned the recent trend of deadly attacks against community leaders and human rights defenders in rural areas. Of particular interest to Council members will be the implications of the presence of non-state armed groups (including FARC-EP dissidents, the Ejército de Liberación Nacional guerrilla, successors of former paramilitary groups, and other groups linked to organised crime) in the areas vacated by the FARC-EP.

According to the UN, the requested second UN mission would last until June 2020, overlapping the 2018 elections and the first two years of Colombia’s next president.

Santos, who has been the primary promoter of the FARC peace deal, is not allowed to run for a third term. This leaves the continuation of the 10-year peace process in the hands of Colombia’s next president, whoever that may be.