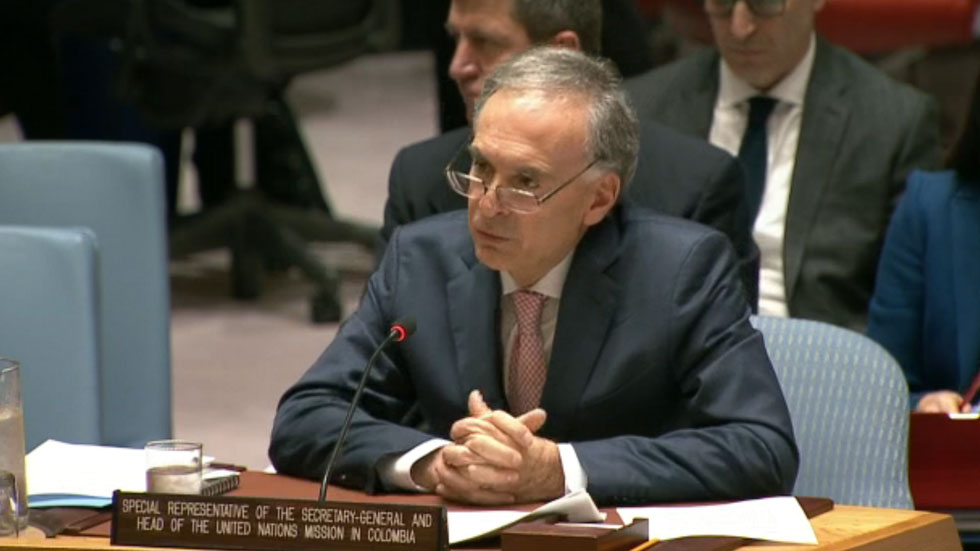 The United Nations’ mission chief in Colombia told the Security Council on Thursday that the country’s authorities have been “slow” in implementing a peace deal, while it only has a “relatively short window of opportunity” to create conditions for a lasting peace.

Arnault had come to New York City for a regular update on the peace process that is monitored by UN peace observers in which he updated member states on the progress of the process that began on December 1.

In his report, Arnault said “there have been concerns with regard to the slow pace of implementation [of the peace deal] in a number of sensitive areas mentioned in the report of the secretary general.”

Arnault warned the UN that “there is a relatively short window of opportunity to establish a solid foundation” for peace “through the laying down of weapons, the reintegration of FARC combatants and the delivery of peace dividend to the most affected people in the areas.”

While, four months after signing peace, the Colombian government has in some cases not even finished 10% of FARC demobilization camps, according to the latest report by the UN’s Secretary General.

Additionally, the Colombian military has been “slow” and “inefficient” in assuming territorial control of former FARC territories, effectively resulting in these areas being taken over by other illegal armed groups rather than the State.

The United Kingdom’s representative at the meeting, Matthew Rycroft, urged the Colombian government to speed up the provision of security in areas previously under FARC rule.

“We are concerned by the activities of non-state armed groups, including ELN, and criminal attacks against community leaders and human rights defenders as verified by the OHCHR report in March. These attacks are a threat to public confidence in the peace agreement, especially in isolated and vulnerable communities.”

“A robust, coordinated response from the government is needed to secure security in all areas vacated by the FARC,” the UK ambassador told the council.

US ambassador Nikki Haley, whose country has so far failed to fulfill its promise to financially support the peace process, stressed the UN Mission’s “critical role” in the international support of the implementation of the “historic” peace agreement between the state and the FARC and praised the UN’s role in Colombia’s peace process.

However, also Haley stressed the necessity Colombian authorities to assume authority in areas long neglected and even abandoned by the state.

“It’s no secret that as the FARC move into demobilization zones they leave behind remote, lawless areas that had been largely untouched by the Colombian government. The political vacuum this has created is a dangerous threat to long-term peace. It must be filled before other armed groups, including drug traffickers, step in.”

The security council confirmed that attacks on human rights and community leaders have increased since the peace process took effect on December 1 last year.

The 10-year peace process is meant to end decades of political violence that has marked Colombia’s recent history.