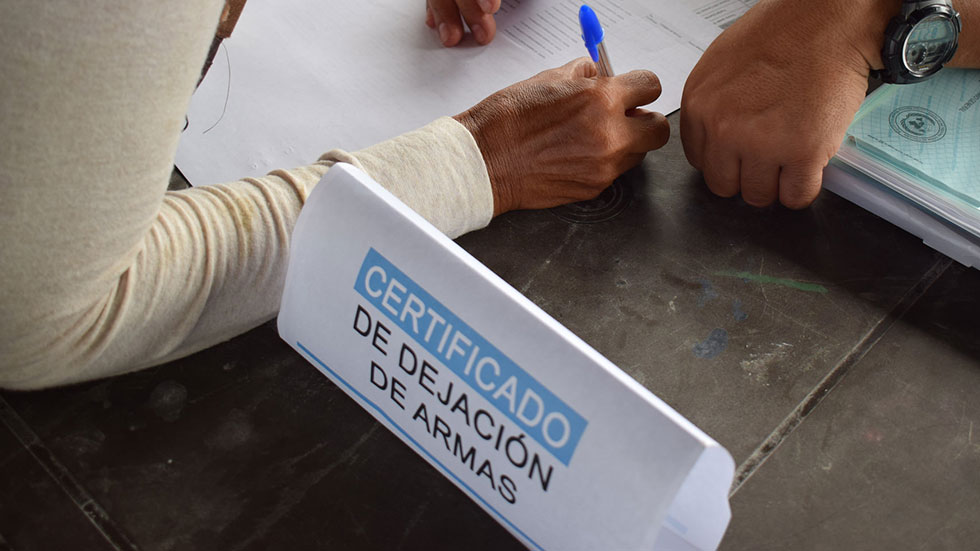 UN confirms having 40% of FARC guerrillas’ weapons, 20% less than planned

The United Nations said Wednesday it had received 40% of the demobilized FARC guerrillas’ weapons, 20% less than agreed in the timeline that seeks the rebel group’s full disarmament before Monday.

The international organization did not say why the FARC, which had claimed it was “keeping its word,” had delivered only 2,800 of the approximately 4,200 handguns and rifles it had promised to surrender before Tuesday.

President Juan Manuel Santos on Tuesday also indicated the FARC had delivered 60% of its weapons, which the UN on Wednesday denied.

What the situation is

The surrendered weapons correspond to those in possession of the 6,934 guerrillas registered in the demobilization, disarmament and reintegration camps.

Another 1,180 of 1,541 registered militia members, who took part in the FARC’s war against the state from their homes, have reported themselves at one of the 26 of these DDR camps to formally take part in the reintegration process.

This is considerably less than the 10,000 militia members the government had estimated to be a member of the FARC ahead of the peace agreement.

The 40% of surrendered weapons also does not include the more than 900 reported weapons caches the guerrillas had hidden in Colombia’s jungles and mountains and are recovered separately and simultaneously under UN supervision.

Will the FARC really be disarmed by Monday?

Referring to the surrendering of the registered guerrillas’ and militia members’ weapons, the UN Mission in Colombia said in a press release it “confides that the disarmament process will continue to proceed the coming days in order to comply with what has been agreed.”

Following major delays in the implementation of the peace deal, particularly the delivery of the storage containers, the UN had been forced to extend the deadline for the FARC’s disarmament with 20 days. This revised deadline is is due to expire on Monday.

By then, FARC guerrillas and militia members who did register, but fail to effectively surrender their weapons will be in violation of the peace agreement, not be allowed to take part in the reintegration process or be granted amnesty, and face criminal prosecution.

The recovery of the jungle caches is a logistical nightmare virtually impossible to carry out before Monday. The sheer number of caches that need to be either recovered or destroyed surprised even the FARC leadership.

The main question that remains unanswered is why there is such a major discrepancy between the government’s initial claim the FARC had 10,000 militia members and the 1,541 who were ultimately reported by the FARC.

Like with the weapons caches, a number of these members could be unknown to the FARC leadership and, like with the government’s initial claim, the general’s claim could have been inflated or a matter of definition.

In one case, the FARC refused to recognize some 300 self-proclaimed militia members in the southwestern Nariño province, claiming they were drug trafficking associates. Approximately 100 of them demobilized outside the formal peace process. Some 200 are now suspected to have formed a new group called La Gente del Orden.

Some part-time FARC members or associates may want to remain anonymous not to lose their job or become a target for anti-guerrilla assassins.

Others, however, might simply have abandoned their former patrons to form or join dissident groups in an attempt to maintain control over guerrillas’ abandoned criminal schemes.

At the same time, others deflected and took over the AUC groups’ criminal rackets.

So far, Colombia Reports has received reports of five identifiable FARC dissident groups, considerably less than the 60 that emerged after the disarmament of the AUC.

However, Colombia’s latest peace process is still young and like with the AUC, it is likely a number of FARC members and associates will stay out of the process.

Consequently, they will become a police matter and continue to be a public security threat, albeit much smaller than the FARC.