Colombia’s government denies the existence of paramilitary groups in the country, ignoring the fact that these groups have existed (and whose existence has been denied) for decades.

Almost all the country’s current generation of paramilitary groups have direct links to either slain drug lord Pablo Escobar’s Medellin Cartel or a drug-fueled military offensive by Marxist FARC guerrillas in the 1990s.

For example, “Otoniel,” the current leader of paramilitary group AGC, a.k.a. “Gulf Clan,” was a member of guerrilla groups EPL and FARC before flipping from the extreme left to the extreme right and joining paramilitary organization AUC in 1997.

Both the late “Cuchillo” and the imprisoned “Don Mario,” the respective founders of ERPAC and the AGC, started their clandestine career in the Medellin cartel, before switching to “Los Pepes,” the anti-Escobar paramilitary group that helped Colombian and United States authorities kill Escobar in 1993. 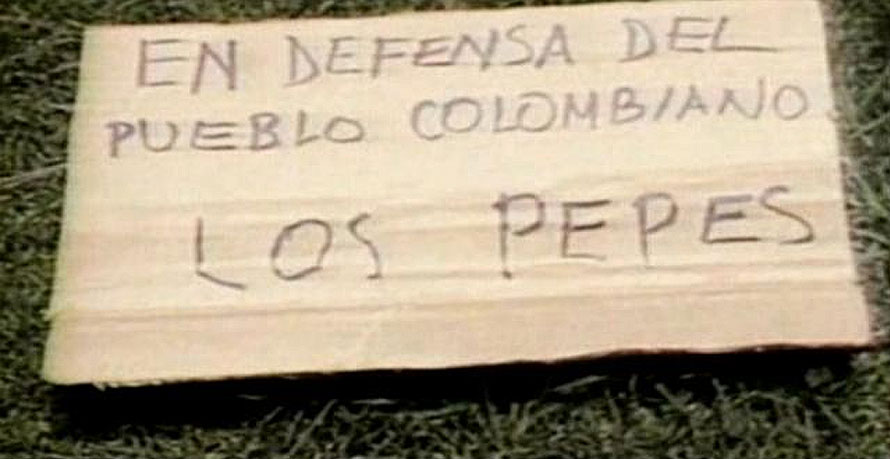 Then-president Cesar Gaviria, with the strong support of then-governor of Antioquia Alvaro Uribe, legalized the formation of civilian militias in 1994. However, this escalated violence between the former Pepes and the FARC, who had both inherited parts of the Medellin Cartel’s criminal empire.

Less than four years after Escobar’s death and in ongoing collusion with regional elites and the military, the Pepes’ leaders founded the AUC.

The subsequent five years were the most traumatic in Colombia’s armed conflict as both the FARC and AUC had become tremendously wealthy because of Escobar’s heritage and were using the revenue of drug trafficking to fuel the armed conflict that had been waging since 1964.

In spite its unprecedented cruelty, the AUC received active support from both the Colombian military, the private sector and elements within the government, all of whom were unable to counter the increasingly powerful guerrillas. 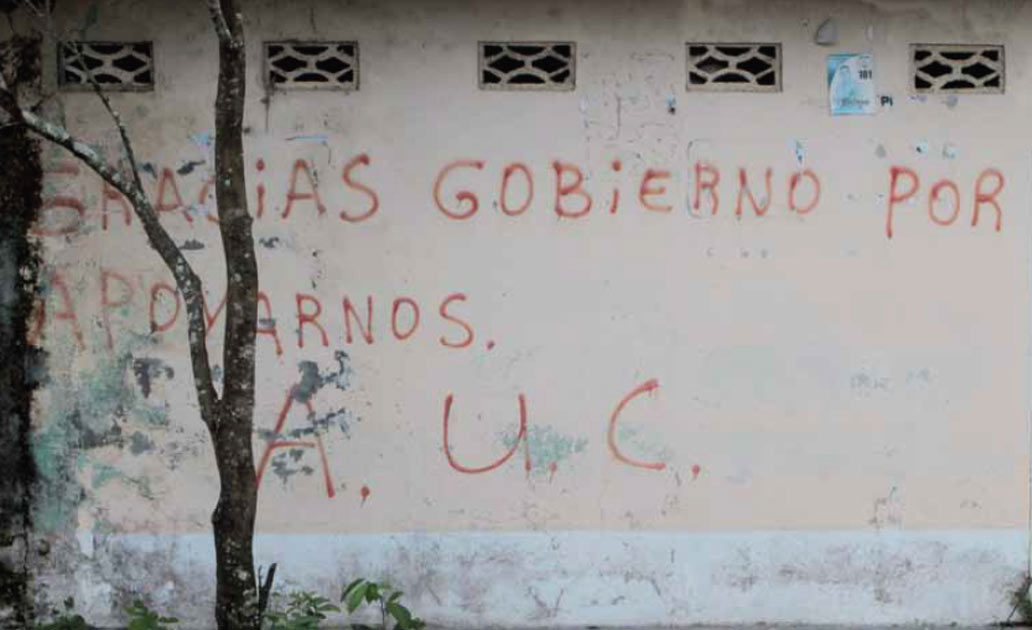 “Thank you, government, for supporting us. AUC”

Long-time paramilitary promoter Uribe became president in August 2002, one month before the US declared the AUC a terrorist group.

Ahead of a 2005 peace deal, the AUC began demobilizing its blocs in 2003, confiding that their long time ideological ally Uribe would cut them a good deal, which he did.

However, something went very wrong in 2006, the last year of the AUC’s demobilization.

AUC co-founder Vicente Castaño was able to evade arrest and immediately went underground. He considered Uribe’s move an act of betrayal and ordered the mid-level AUC commanders to rearm and re-establish AUC authority.

While Castaño founded the Aguilas Negras, his childhood friend “Don Mario” founded the Gaitanista Self-Defense Forces of Colombia (AGC), a.k.a. “Los Urabeños,” while “Cuchillo,” also a subordinate of Castaño at the demobilized Centauros Bloc, formed ERPAC.

In total, more than 60 paramilitary blocs rearmed in the following year by mid-level commanders loyal to Castaño. These groups immediately retook abandoned AUC criminal rackets and tried to reestablish ties with friends within the military, politics and business.

The vast majority of these groups disappeared as quickly as they appeared, either because they were unable to defend themselves against long-time enemies of the FARC or were usurped by drug cartels like “Los Rastrojos.”

However, the Aguilas Negras, ERPAC, AGC, La Constru and La Cordillera successfully resumed operations in the areas where they previously had been active under the banner of the AUC. 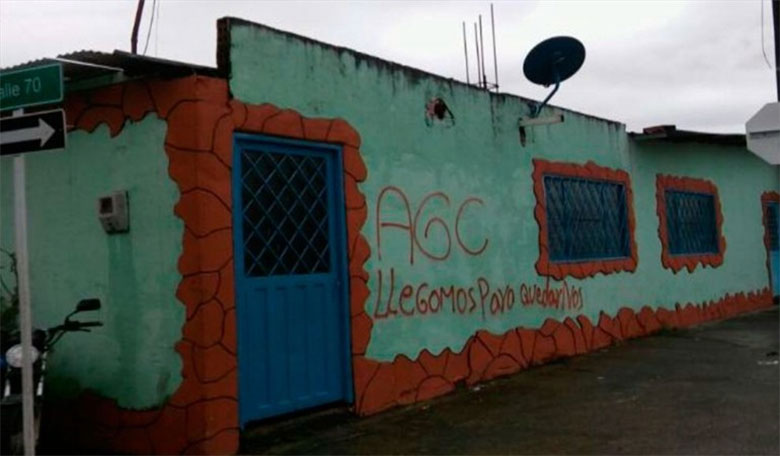 The AUC co-founder was assassinated in 2007, allegedly at the order of Berna, causing tensions between La Oficina and Los Paisas on one side and the AGC, supported by ERPAC on the other.

The Aguilas Negras splintered and, while continuing to operate under the same name, never seemed to have been able to establish a central command.

Many dozens of congressmen, mainly Uribe allies, were sent to prison for using the death squads for their political benefit and — again in violation of the peace deal and against court orders — the president extradited most paramilitary chiefs to the United States in an apparent attempt to protect the establishment.

However, Berna’s extradition spurred a turf war between Mario’s AGC and Berna’s Paisas and La Oficina who were both vying over control over traditional AUC territory in the northwest of Colombia and in Medellin.

Meanwhile, the national authorities tried curbing the growing paramilitary problem by force. Police arrested Mario in 2009 and killed Cuchillo in 2010.

AGC control transferred to former Medellin Cartel assassins “Otoniel” and his brother, “Giovanni.” ERPAC was taken over by Caracho, who had been working for Cuchillo since 1997.

By the time Uribe left office in 2010, the paramilitary groups had consolidated much of the AUC’s rackets and ties to Mexican drug cartels, leaving the outgoing president’s peace process in shatters.

The AGC had overpowered the Paisas in a war that left thousands dead and even more displaced. La Oficina made peace with the AGC in 2011, allegedly bartered by the same elite that had supported the paramilitaries in the 1990s.

Incoming President Juan Manuel Santos continued Uribe’s policy of denying the continuation of paramilitarism in spite of increasing evidence elements within the military and the political establishment continued working with the illegal armed groups.

Instead, Santos’ continued Uribe’s policy of referring to the paramilitaries as organized crime groups, denying the ongoing links to politics and the private sector.

It wasn’t until a peace agreement with the FARC that Santos was forced to admit that the decades-old structures between Colombia’s political establishment and the drug trafficking paramilitaries were in tact and needed to be deconstructed.

Both the AGC, claiming to consist of 8,000 men, and La Oficina, reportedly an army of 5,000, repeatedly asked the government to be included in the FARC peace process citing their decades-long involvement in the armed conflict as reason, but to no avail.

According to the government, the former AUC mid-level commanders never took part in the armed conflict and are leaders of plain and simple drug trafficking organization, the same it had long claimed of the Marxist FARC.

Just like President Virgilio Barco did in 1989 and less than a week before a governor was sentenced to 55 years in prison over his ties to the AGC, Defense Minister Luis Carlos Villegas firmly stated that “there are no paramilitaries in Colombia.”