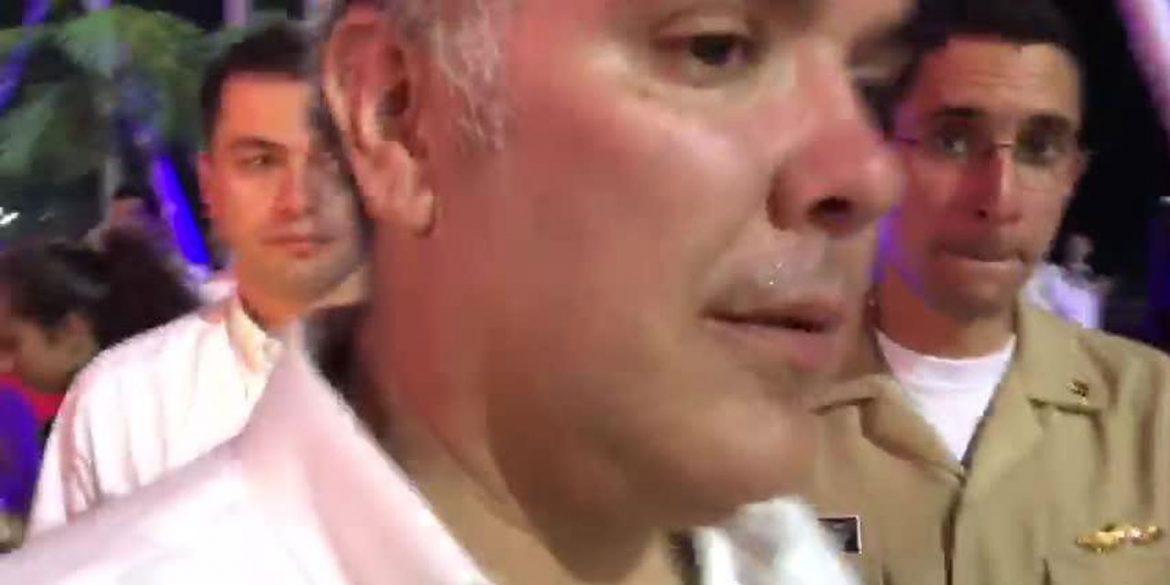 A journalist was reportedly assaulted by police after asking Colombia’s President Ivan Duque on Wednesday about a bombing that killed eight children he authorized.

“What are you talking about, man?” Duque said before journalist Jesus Blanquicet was pulled away and punched in the ribs by a cop.

The journalist was asking about the August 29 bombing that killed at least eight children between 12 and 17 years old and cost the head of Defense Minister Guillermo Botero.

Botero’s resignation comes little more than a week after the president’s far-right party received a beating in local elections, amid an indigenous genocide and two weeks before a national strike.

While Duque was attending a forum in Barranquilla to talk about his favorite topic, the “orange economy,” calls for the president to resign grew louder on social media.

When Duque left his safe space and the journalist asked him “what do you think about the bombing in Caqueta?” the sudden confrontation with reality evidently was too much for the president and father of three.

The father of one of the children who were killed in the bombing against “Cucho” is saying that his daughter’s dream was to be a professional football player. She was in the camp because she was the victim of forced recruitment.

Duque has said he personally authorized the operation that was carried out hours after the president was told about the rearmament of the FARC’s former political leader, “Ivan Marquez.”

The ombudsman of Puerto Rico, Hernan Carreño, told media that he had been warning national authorities about child recruitment in the area where Duque authorized the bombing since May.

Fifteen months after taking office, Duque, his administration and his minority coalition in Congress appear to be in shambles.

The president has been reluctant to implement peace policies agreed with demobilized FARC guerrillas in 2016, which so far has resulted in increased rejection of his leadership.

Duque’s announcement last week to send the military to southwestern Colombia in response to a genocide of indigenous people was widely rejected and now the president is accused of killing children.

His finance minister’s 2018 tax reform that was supposed to fund the government’s budget was sunk by the Constitutional Court and is stuck in Congress.

Senator Roy Barreras, who effectively took down the defense minister, used his momentum to urge the battered president to walk away from the far-right agenda of his party and embrace that of the moderates.

The president can and should call for unity around three themes:

Whether Duque’s latest beating will convince the president to change his policies remains to be seen. He will first have to recompose himself after his shock encounter with reality.