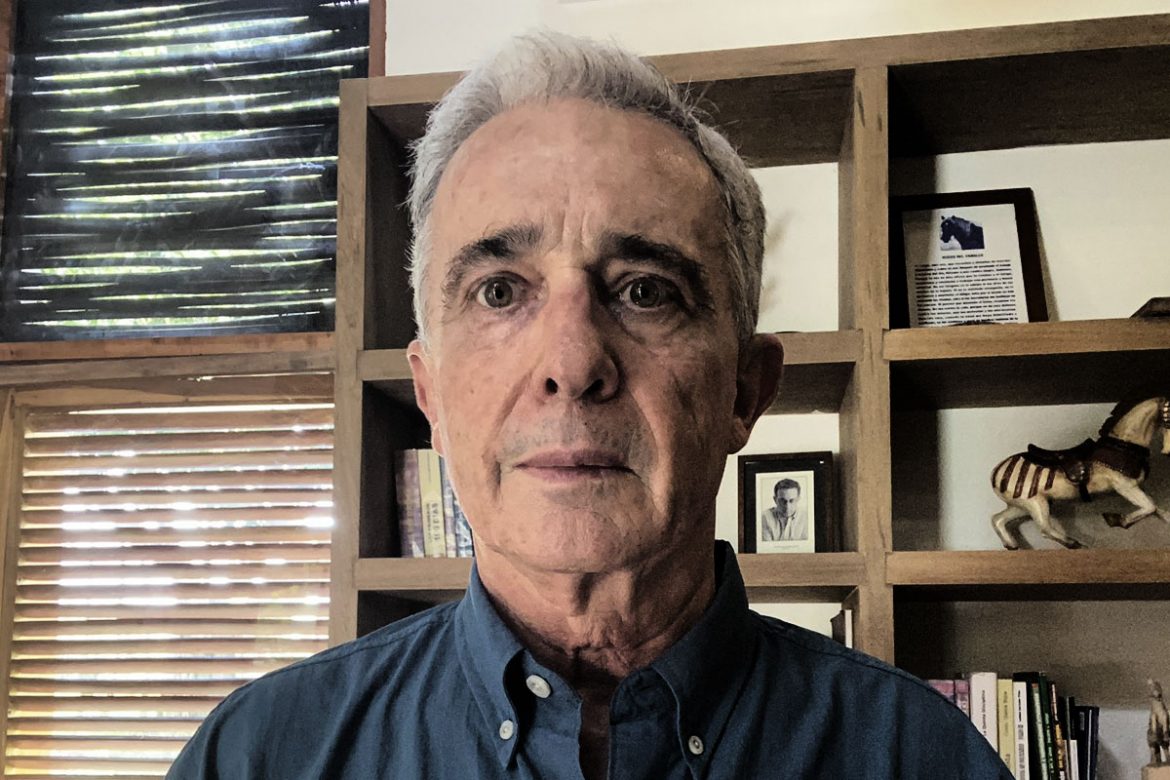 Colombia’s former President Alvaro Uribe became president in 2002 with the help of a paramilitary group the US government had designated a foreign terrorist organization, according to a former member.

A Medellin Court ordered to investigate the Bloque Metro’s use of terrorism to help Uribe become president in 2011 already, but has been stonewalled by the prosecution for a decade.

In fact, the prosecution denied the group allegedly founded by Uribe in 1996 even existed for years, according to the court.

In a testimony that came to light last year, a former member of Bloque Metro told a prosecutor in detail how the paramilitary group terrorized people into voting for Uribe in the presidential election organized and monitored by the father of President Ivan Duque.

The damning testimony was given by former paramilitary fighter “Diomedes” in 2011 already, but didn’t come to light until February last year.

Prosecutor: While you were in the Bloque Metro, was there any interference of the Bloc in the election of mayors, councilmen, congressmen, congresswomen, of the president of the republic, in which the civilian population would be intimidated to demanded to vote for candidate A, B or C?

Prosecutor: And for which other candidates?

Diomedes: No, I was only involved in the 2002 presidential elections.

Prosecutor: What about mayors or members of the council?

Diomedes: No, I wasn’t involved in that.

Prosecutor: Were there any threats to people who did not agree to the candidate you said?

Diomedes: Well, the threat was permanent, because just by being in the area of the people who came out to vote, and if you and if you gathered, for example, 200 or 300 people from a village, as Commander Daniel or Commander Pajaro did, they would tell them: Well gentlemen, you are going to go to the municipality of Gomez Plata and vote for Mr. Alvaro Uribe. We will transport you in vans, in pickup trucks, in buses, from different villages and when they saw the pressure, the weapons, the armed groups, what they armed groups, they knew what to do, vote for Mr. Alvaro Uribe.

Prosecutor: You were armed when to got them to vote?

Prosecutor: On election day, were you present in the polling stations?

Diomedes: No, the people were taken out of the town and one had to make sure that there were no public order problems in the town, because there were so many people in the town, but not to be aware of the voting tables.

Prosecutor: did you meet with the Registrar, or with the Police to manage that election day?

Prosecutor: Were the farmers transported to their land after the elections?

Diomedes: Yes sir, both there and back. Likewise, in all the different regions of Northeastern Antioquia, the same operation was carried out for these elections, in all the towns in Antioquia that were controlled by the Metro Bloc.

Prosecutor: You received the direct order from who?

Diomedes: Doble Cero. Doble Cero gave the order to different commanders in the different areas that the community had to vote for Mr. Alvaro Uribe and that’s what we did.

Prosecutor: The electoral results turned out, for example in Gomez Plata, as expected? Were you able to deliver?

Diomedes: Yes of course, everybody voted for Mr. Alvaro Uribe, they voted. This is a good point of reference because you can go as I imagine as in each poling station there must be a record, so based on that record you can check if people were lying or telling the truth. Let’s say that 95% of the people who voted in the municipality of Gomez Plata voted for Mr. Alvaro Uribe under pressure by the paramilitaries.

Prosecutor: People who voted for other candidates, did you manage to establish who they were?

Diomedes: No, because I imagine that it was an insignificant number of votes since most votes went to Mr. Uribe, the business partner and friend of the guy who was going to legalize us. That was the payment to all of us, that we were going to be legalized.

Prosecutor: What do you mean legalize?

Diomedes: Like the Army or the Police, legal people, that was the story that reached the Bloque Metro and that is why so many things were done to pressure people to vote for Dr. Alvaro Uribe.

What followed was an awkward moment in which the judge reminded the prosecution to investigate the former president and Duque’s political patron.

Judge: Mr. Prosecutor, in the version given by Luis Adrian Palacios Londoño, alias Diomedes, he makes some specific and criminal allegations, were copies of these made?
Prosecutor: Yes, your honor. The copy of the respective video clip was sent to the national headquarters of [transitional justice system] JYP, which then forwards it to the district prosecution.
Judge: In regards to the mayors, but in regards to the former president?
Prosecutor: Yes, yes.
Judge: Verify the status of the investigations too, of both the investigations, that of the mayors who were in Las Margaritas as well as the election fraud that was done about the election of the president of the republic that year.
Prosecutor: We will, your honor.

Extradited paramilitary commander confirmed the claims of Diomedes in 2013

The prosecution never investigated the paramilitary group allegedly founded by Uribe, claiming it never took part in the demobilization process of paramilitary organization AUC agreed in 2005.

The Bloque Metro couldn’t possibly have taken part in this group because it was exterminated for objecting to the “narcofied” demobilization process between the former president and the AUC two months after Uribe took office.

Following the paramilitary group’s extermination and the AUC’s demobilization deal, the prosecution simply denied that the Bloque Metro — which at one point had 1,500 fighters — ever existed.

Crimes committed by the paramilitary group were attributed to common criminals or groups that did take part in the AUC’s demobilization process until Medellin’s Superior Tribunal stepped in.

Uribe is currently on trial for allegedly trying to tamper witnesses who claim the former president founded the Bloque Metro with his brother and befriended drug traffickers.