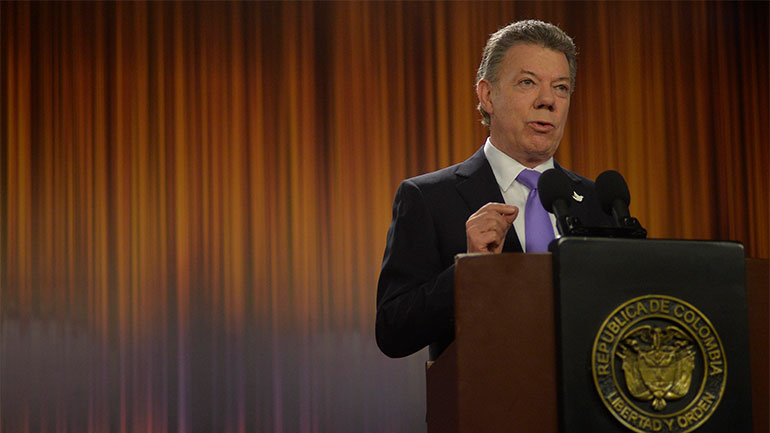 Santos thanks UN for unanimous support for peace verification mission

Santos and the FARC asked the UN and the Community of Latin American and Caribbean States (CELAC) last week to send missions that could verify the warring parties’ compliance to a pending truce, a deal to end 51 years of violence, and the FARC’s disarmament.

“The decision taken by the security council means that from now on we no longer walk alone … to the end of this war” that began in 1964 when several rebel groups formed to overthrow the state.

Santos’ stressed that in the 70-year history of the United Nations, its security council only unanimously supported a resolution on 14 occasions.

The Colombian President thanked the security council member states, the United Nations, Pope Francis and other countries who have supported the peace talks that began in November 2012 and are expected to be less than months away from being finalized.

UN resolution 2261 established a political mission for 12 months, and allows the council to consider an extension if asked by the two parties. The mission will be made up of unarmed observers from Latin American and Caribbean nations.

The resolution asked UN Secretary-General Ban Ki-moon to present detailed recommendations on the political mission’s size and operation to the council for its approval within 30 days of a ceasefire.

Meanwhile in Cuba, negotiators of both the Santos administration and the FARC leadership continue to negotiate the technicalities involved in the demobilization and disarmament of the FARC, which could have as many as 20,000 armed and unarmed members.