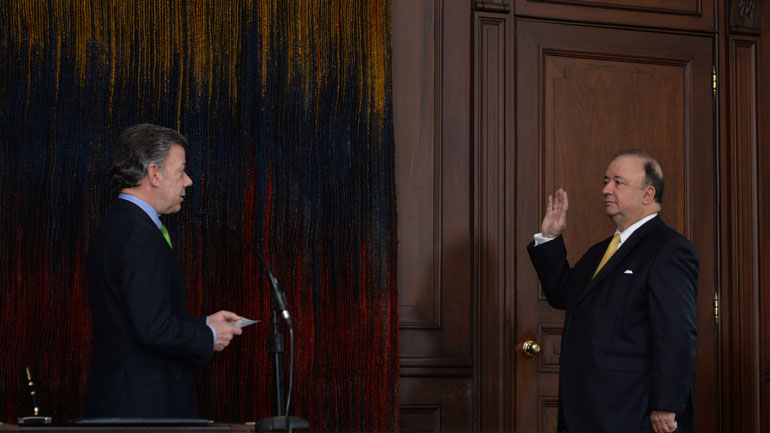 Torn between war victims calling for a ceasefire with rebel group FARC and public opinion opposing exactly that, President Juan Manuel Santos instructed Colombia’s new defense minister “to continue fighting this war until the proposed objectives have been met.”

Until a month ago, the new Defense Minister, Luis Carlos Villegas, was expected to enter office to prepare the military for a bilateral ceasefire and an eventual post-conflict situation as negotiations to end Colombia’s 51-year-long armed conflict had entered their third year and both sides had agreed to several measured to deescalate the conflict.

His predecessor, Luis Carlos Pinzon, led numerous successful campaign and had become closely associated with military rhetoric that sometimes went as far as to call the FARC “human rats.”

Villegas, a respected career politician with no military background, was expected to move away from the hostile rhetoric and introduce a more conciliatory tone that would be more in tune with Santos’ attempts to make peace with the country’s largest and longest-living rebel group.

However, days after Santos announced Pinzon’s replacement, a FARC attack that killed 11 soldiers in the southwest of the country, spurred a series of revenge attack and ultimately the FARC’s suspension of a ceasefire they had been upholding since December.

The violence that followed ruined Santos’ original plans, delayed Villegas’ return from Washington where he was ambassador for three weeks and changed his projected role as Defense Minister from one who would make the transition to peace to one facing one of the most fierce guerrilla offensives since 2011.

Santos admitted that Villegas’ task will be complex. “talking peace while waging war … requires a person with very special qualities,” the president said.

Santos explained that the new reality required Villegas “to do a sort of parallel job: To project the armed forces towards the moment we achieve peace and at the same time not lower our guard in order to achieve peace.”

To do this successfully, the new minister’s job requires “diplomatic skills, leadership skills, [and] strategic skills,” the president said.

The president instructed Villegas — one of the initial members of the government’s negotiation team with the FARC — to “look to the future, but keep your feet on the ground, continue fighting this war until the objectives we have proposed are achieved.”