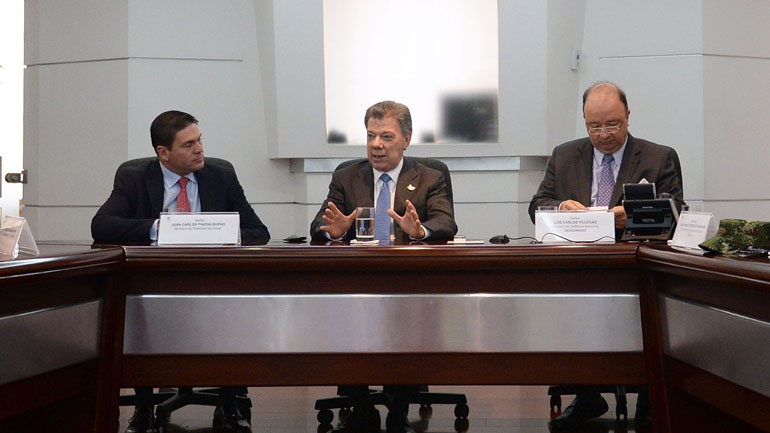 Amid FARC attacks severely affecting public life and security across Colombia, the country’s former ambassador to the US returned to Bogota to lead the country’s Defense Ministry.

The meeting comes as security forces across the country are on highest alerts as an upsurge in rebel attacks have severely deteriorated the security situation, while pressuring peace talks that are being held with the FARC.

Santos appointed Villegas defense minister little more than a month ago, raising expectations that the former business rep and diplomatic heavyweight would lead a military transition towards a peace deal with the FARC and the group’s subsequent demobilization.

However, less than a week after his initial appointment, the FARC suspended a unilateral ceasefire it had upheld since December and began a major offensive, targeting security forces, energy infrastructure and the oil industry alike.

The resumption of FARC strikes delayed Villegas’ return as — rather than transitioning towards a possible post conflict situation — the military was forced to engage in heavy combat with guerrillas in the north, west and southwest and south of the country.

The outgoing defense minister will change place with Villegas and assume the role of Colombia’s ambassador to Washington DC.

On the same day that Villegas returned to Colombia, Santos told press that the country had now entered a post-conflict situation, ignoring the fact that war-related violence had reached levels higher than before the peace talks began in November 2012.

According to Santos “we can say that, in practice, the post-conflict has begun in Colombia.”

Villegas was part of the government’s peace negotiation team in Havana, Cuba in the first year of the talks, before he moved to Washington to rally US support for peace talks that would end the war long backed by Colombia’s North-American ally.