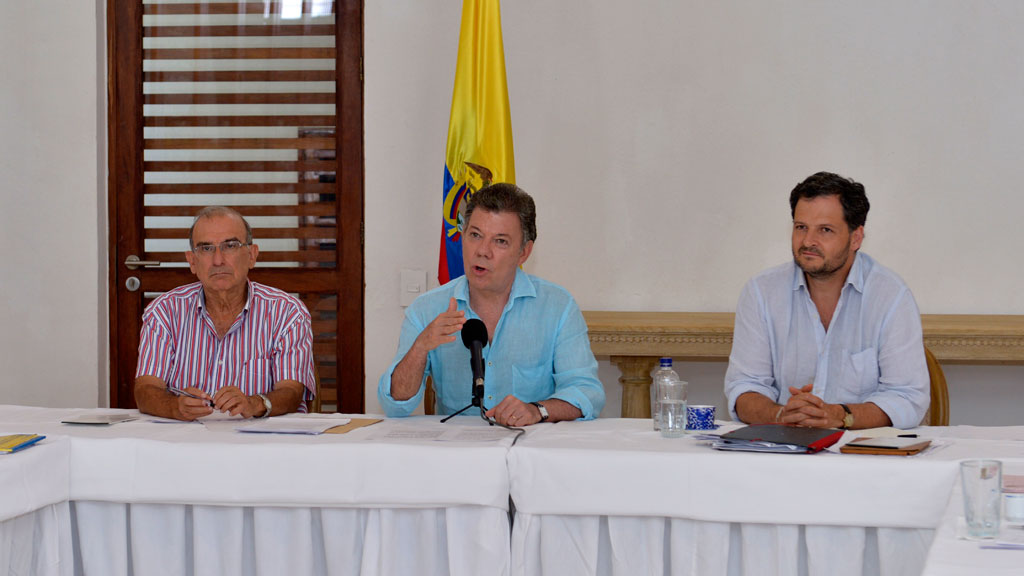 Colombia President Juan Manuel Santos on Monday called on rebel group ELN, the second largest in Colombia, to join the larger FARC rebel group in a unilateral ceasefire and to formalize ongoing peace talks with the government.

Santos made the call after three days of a “spiritual retreat” in the Caribbean coastal city of Cartagena where he met with government officials currently engaged in negotiations with the FARC, and local and foreign conflict experts.

In a press conference with Peace Commissioner Sergio Jaramillo and former Vice President Humberto de la Calle, the government’s chief negotiator with the FARC, Santos praised the FARC’s compliance to its unilateral ceasefire and called on the ELN to join the rebel initiative.

“We want to invite the ELN to join the initiative of a unilateral ceasefire, as the FARC did, and also want to invite them to reach an agreement as soon as possible on the agenda points we have been discussing for a while,” Santos said.

The president announced talks with the ELN in June, five days before his reelection, but has since remained quiet and even ordered a governmental radio silence on the talks that according to the ELN have been deadlocked.

However, while maintaining the order to prosecute FARC and ELN members, Santos said that “the situation is different” and called on all negotiators to accelerate talks “to end this armed conflict for good as soon as possible.”

According to the Peace and Reconciliation Foundation, a left-leaning think tank on the conflict, the ELN could also be close to break the deadlock and formalize talks with the Santos administration.

Investigator Ariel Avila of Peace and Reconciliation told radio station La FM that the ELN leadership met at the end of December in which was decided to formalize the talks that have so far been in a preliminary stage.

“They understand that the negotiation of the political way out is the only alternative to the conflict, but they want to arrive at the table very strong, showing military strength,” Avila told La FM.

Recent ELN attacks in their stronghold in the northeast of Colombia were “normal operations that are carried out to not lose momentum and show they continue in control in spite of checks by the security forces,” said the investigator.

Both the ELN and the FARC have been fighting the state since 1964. While initially fighting the government independently and even each other, the two groups announced to work together after the FARC had begun peace talks.