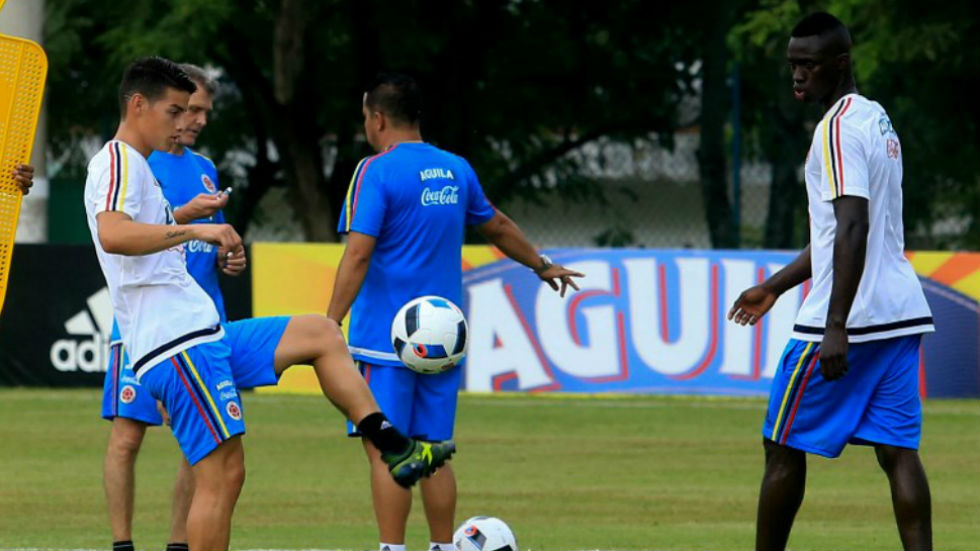 Colombia’s national soccer team travels to neighbors Venezuela on Thursday hoping to secure a win that will strengthen it’s hold on second spot in the CONMEBOL qualifying section at the start of a crucial week of World Cup qualifiers for Russia 2018.

“Los Cafeteros” will be without their captain and talisman James Rodriguez for the clash with the side who currently prop up the South American qualifying table after he was ruled out of action by his new club Bayern Munich with a thigh injury.

While Bayern have put their foot down regarding James’ participation against Venezuela, the Cucuta-born star will travel with the squad and may be available for the game against leaders Brazil next week.

“The Colombian FA has called up James Rodriguez for the World Cup qualifiers against Venezuela on 31 August and Brazil on 5 September. The FCB pro will travel to South America in accordance with the FIFA regulations. However, the 26-year-old will not be available for selection in the first match, as an examination by FCB club medic Dr Volker Braun revealed,” read a club statement.

“This has been agreed with the Colombia international. It remains to be seen if James will be available for the second match, the decision will be made after consultation with Dr Volker Braun and the Colombian national team doctor,” the statement added.

Having racked up 33 points from 14 matches, Brazil has already secured passage to Russia 2018 but this game against Venezuela offers Colombia an opportunity to consolidate second place before welcoming the “Canarinho” to Barranquilla five days later.

Coach Jose Pekerman who has already used an astonishing total of 41 players in 14 rounds has now called upon China-based Giovanni Moreno, as well as playmaker Yimmi Chara from Junior Barranquilla to bolster his attacking options in the absence of James.

Along with Moreno and Chara, the Argentine coach may also look to the services of Boca Juniors’ Edwin Cardona or Junior Baranquilla’s Teofilo Gutierrez to fill the gap left by the captain from a squad that boasts a multitude of options.

Colombia however, will certainly be looking to veteran striker Radamel Falcao to lead the line in attack against the Venezuelans.

“El Tigre” is in red hot form having scored seven goals in his last 4 appearances for French club Monaco and will be desperate to lead his side to the World Cup next year having missed out on Brazil in 2014 through injury.

Venezuela coach Rafael Dudamel for his part has opted for youth with his squad selection for the clash in San Cristobal as he seeks to rejuvenate his team who have secured just six points from 14 matches in the qualifying rounds.

Torino midfielder Tomas Rincon and West Bromwich Albion striker Salomon Rondon will provide a little more experience for “La Vinotinto” who have been buoyed by their achievement of reaching the final of the World Under-20 Cup in June and will see the upcoming games as a chance to build for the long term.

With difficult home games against Brazil and Paraguay, as well as an away trip to Peru on the cards for the Colombians in the final three games, Jose Pekerman will see a win in the Estadio Pueblo Nuevo as essential.

The last time the two sides met in September of last year, Colombia, with home advantage, prevailed on a 2-0 scoreline but they will be fully aware that nothing short of a complete performance will be needed on Thursday to secure another three points.

The worsening political and economic crisis in Venezuela has already caused disruption to the team’s travel plans but defender Davinson Sanchez doesn’t believe the crisis will affect the minds of the players.

“I think we focus more on sports,” he said to media. “All countries have their problems and should try to solve them in their own way,” he added.

Juventus  winger Juan Cuadrado also reaffirmed that the sole focus must be on securing a win, emphasizing the magnitude of the rivalry between the neighbors.

“Venezuela playing Colombia is always played as if your life depends on it,” he said.

Despite the difficulties the Colombia side may face, Pekerman’s variety of quality options throughout the squad should be enough to see them overcome the Venezuelans and move one step closer towards World Cup qualification.