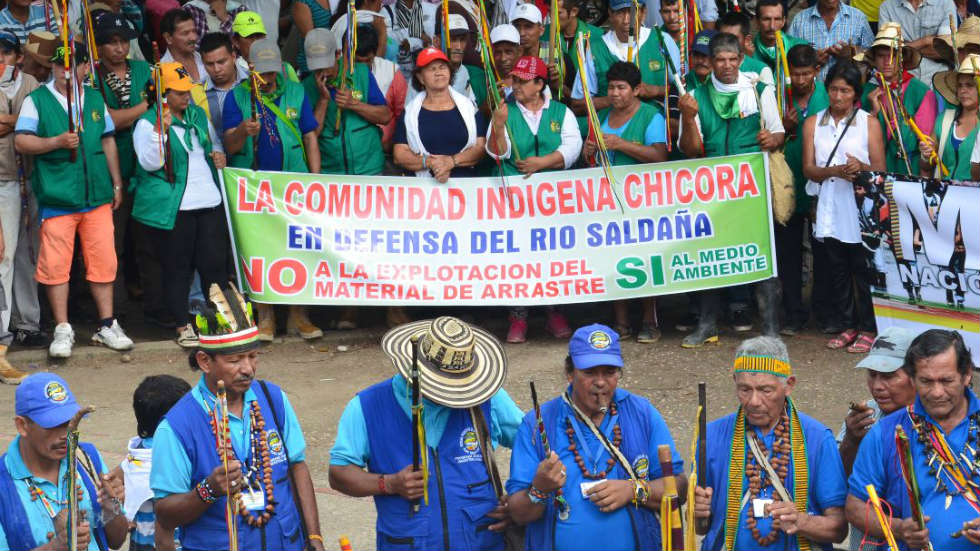 At least eight people have been injured in clashes in Colombia after tens of thousands of indigenous people joined protests on Monday, blocking significant trade routes.

The indigenous protest, expected to continue indefinitely in at least 21 of Colombia’s 32 Colombian provinces, is technically separate from a widespread protest by rural farmers, which is now entering its tenth day.

Colombia’s indigenous announces to shut down roads in massive protest

Both groups are trying to shut down major roadways and both are demanding the implementation of the peace agreement with the FARC.

The illegal roadblocks put up in Cauca and Valle del Cauca spurred a violent response from police that tried to clear major trade routes.

The protests shut off parts of Colombia’s largest port city, Buenaventura, and the main road to Ecuador.

Before indigenous communities launched their own national protest on Monday, thousands of rural farmers, organized by civil society and farmers’ associations, were already engaged in a widespread mobilization.

The farmers’ protest began on October 22 with calls to the government to implement an illicit crop substitution program outlined in the peace agreement with the FARC.

Many of the farmers cultivate coca, marijuana or poppies. Under a new drug policy in Colombia, small-time farmers cultivating crops for illicit use like coca, the base ingredient for cocaine, should have the opportunity to substitute their crops for legal plants in exchange for financial and technical assistance.

But many are frustrated with the government’s shaky rollout of the program. The government has continued to forcibly eradicate peoples’ illegal crops before they have the chance to participate in the substitution program, in some cases leading to lethal clashes between farmers and police.

Leaders of the rural farmers’ protest claim the movement will not stop until the government puts an end to forced eradication. 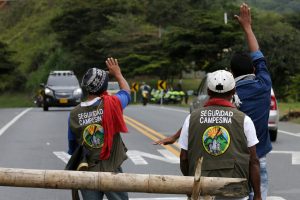 Farmers block the Pan-American Highway in Cauca between Cali and Popayan on Monday. Only a few miles away, dozens of trucks arrive with indigenous groups preparing to protest. (Image credit: El Tiempo)

Many of the rural farmers are also calling on the government to better protect social leaders.

Since the government signed a major peace accord with the former rebel FARC group, social leaders and human rights defenders have been killed in Colombia at rates nearly double the year previous.

The majority of these leaders come from Afro-Colombian and indigenous communities. Many have also been proponents of the crop substitution program.

Indigenous groups, in addition to protesting against the security situation facing their social leaders, have also called on the government to honor hundreds of unfulfilled promises and agreements.

Many of the agreements extend beyond the final peace agreement with the FARC, and some stretch back years.

According to Semana magazine, the government has failed to implement, or has only partially implemented, up to 1,200 separate agreements with indigenous groups, many of which came about after widespread protests.

Colombia’s indigenous announces to shut down roads in massive protests

“Since 2013 we have had specific agreements with the Government that remain unfulfilled,” said Luis Fernando Arias, high counsel for Colombia’s National Indigenous Organization (ONIC).

These agreements include “purchasing land for [indigenous] reserves, a [presidential] decree that recognizes us as environmental authorities…and protection for threatened leaders.”

“We continue to be excluded from the peace process [both with the FARC and the ELN], and that is why we’re protesting,” he added.

We’re not calling for anything new. What we’re calling for is the fulfillment of agreements made in terms of land, education, health and security.

Colombia’s Minister of the Interior, Guillermo Rivera, is leading the state response to the protests. So far Rivera not made any concrete proposals for better protecting indigenous leaders, or social leaders in general.

In the Cauca province, where farmers, and now indigenous groups, are shutting down a major trade route connecting Colombia and Ecuador, some believe the two groups may join their protests together.

Jonathan Centeno, a spokesman for the Patriotic March political movement in Cauca, said the indigenous groups and farmers could join forces considering “all of us have been abandoned and forgotten in this country.”

Leaders of the farmers’ protest are currently engaged in dialogue with the national government in Bogota, and they are also hopeful the government will set up regional-specific negotiations in Catatumbo and Cauca.

Both groups are protesting in Bogota, Cauca, and the Catatumbo region.