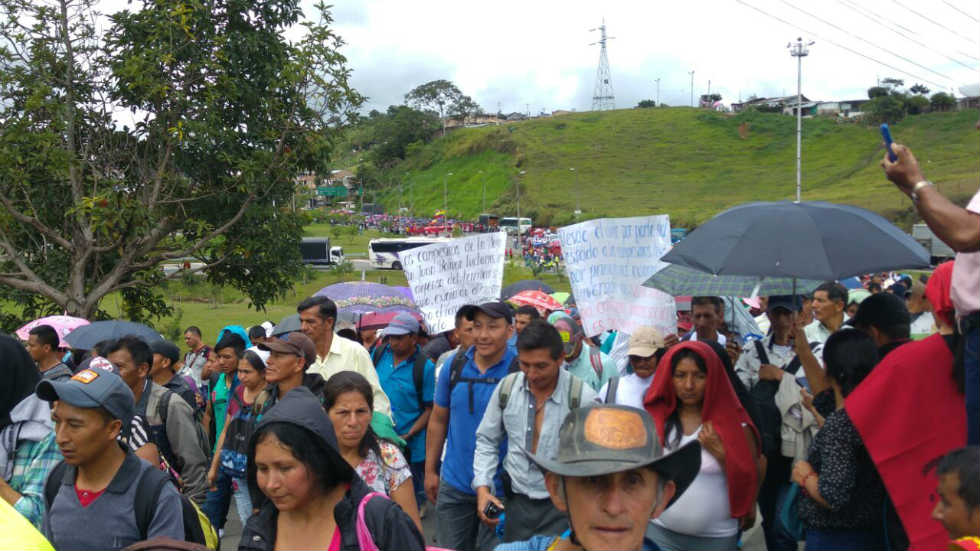 Outraged by government failures to honor a peace deal with the FARC, rural communities across Colombia have initiated a “national strike” demanding widespread solutions to poverty, violence and drug trafficking.

The strike is the most far reaching since 2013 when farmers took to the streets decrying abject poverty and negative economic effects of a free trade agreement with the United States.

Rural citizens took over at least one major roadway Monday, joining protests in at least eight Colombian departments claiming the national government has failed to carry out an array of promised rural reforms and investment projects.

As part of a peace deal with the rebel group that is now a political party, the government agreed to invest in rural territories.

Coca and marijuana farmers would also be given the opportunity to substitute their crops in exchange for technical and financial support.

However the national protest that erupted Monday, which protest leaders claim will be “indefinite,” reflects widespread discontent with the government’s implementation of the peace agreement.

In the Cauca province, coca farmers organized by the National Coordination of Coca, Marijuana and Poppy Farmers (COCCAM) have blocked sections of the Pan-American highway, disrupting trade with neighboring Ecuador. 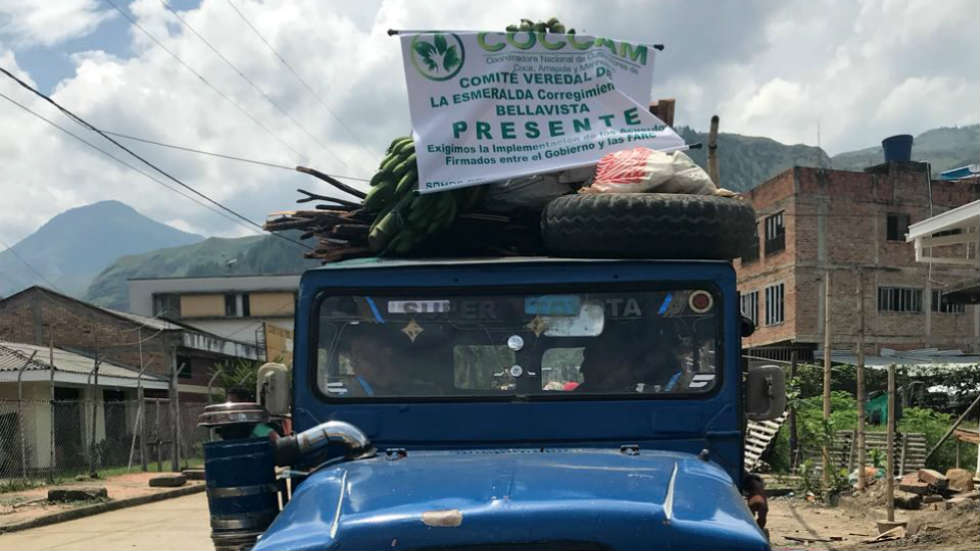 The farmers demand an end to forced coca eradication operations, which have resulted in a number of deadly clashes between communities and security forces.

Instead, they want the government to comply with the promised crop substitution program, giving coca growers more time to switch to legal crops before engaging in forced eradication.

If we’re protesting in the streets it’s because we want the peace accord fulfilled. In the case of coca farmers, we’re fighting to materialize what was agreed in regards to the substitution of so-called illicit crops. And we’re saying no to [forced] eradication, which is sowing death in our communities.

The Pan-American highway protest has caused members of the business sector and truckers union, worried about their trade routes, to further pressure President Santos.

A rosary of demands

Many of the protests stretch beyond the extent of the peace agreement with the FARC.

In Cauca, members of the indigenous community demand the fulfillment of promises made in the 1990s regarding the organization of national resources.

In Nariño and parts of Antioquia, protesters have called for increased security guarantees for social leaders, especially for communities interested in illicit crop substitution.

In all of the protests, organizers have called on the government to honor agreements made at the local and national level for increased investment in rural infrastructure.

Some of those agreements were reached after a similar national protest in 2013 during which parts of the country were shut off by tens of thousands of protesters.

In Popayan, the capital of Cauca, the president admitted last week that the situation facing Colombia’s rural territories is worse than he expected.

“We never imagined the logistical difficulties surrounding village zones [for the FARC reintegration] when we chose them,” the president said.

“They have no communication systems or infrastructure,” the president added, confirming what rural Colombians have been calling for decades.

Santos warned the protesters that blocking major roadways could lead to a response by state police.

During the 2013 uprising, more than a dozen protesters were killed while hundreds were injured or jailed. The police reported more than 80 injured officers then.