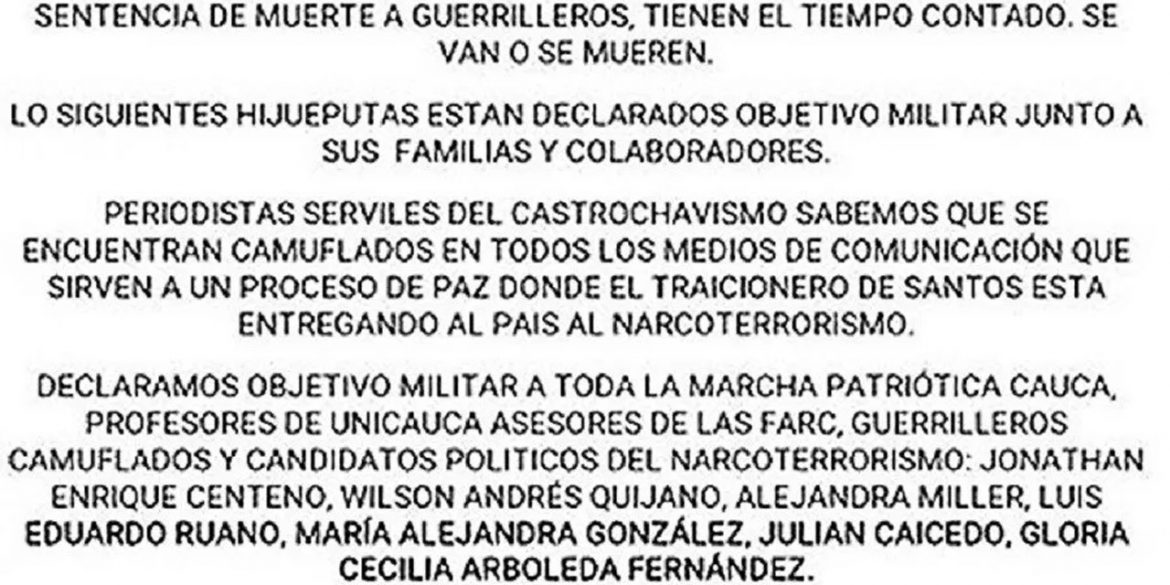 The embassies of 12 countries and multiple international organizations urged Colombia’s government on Thursday to protect journalists after a spike in death threats from far-right activists.

In a press release, the embassies said they “wanted to publicly express our deep concern over the increase in death threats this year.”

According to the embassies and the Foundation for the Freedom of Press (FLIP), at least 124 journalists have been threatened in more than 100 death threats so far this year, a 48% increase compared to the same period last year.

“We remind the national and regional authorities of their responsibility to guarantee the protection of all journalists,” the embassies said.

Countries and organizations that signed

The United States, whose government has verbally attacked the press since the election of President Donald Trump, failed to sign the statement.

A free press, with full guarantees to do their work, is a fundamental element and value of a democratic society.

FLIP urged the Prosecutor General’s Office “to investigate who is responsible for the death threats” and fiercely criticized the National Protection Agency (UNP), the entity in charge of protecting threatened citizens.

FLIP has reported cases of threats to the UNP. However, on many occasions the entity has not been diligent enough to address the risk to which reporters are exposed. Parallel to the increase in threats, FLIP with concern has noticed the dismantling of protection schemes for journalists under threat.

While death threats to journalists are not uncommon in the South American country, the past year saw not just an increase in volume of threats, but also a change in targets.

Multiple renowned journalists working for national media in the capital Bogota have also increasingly been threatened.

Where journalists have been threatened

The latest death threat was sent to Vanessa De La Torre of television network Caracol. The reporter was told on Twitter that “we’re going to kill you and your clique of journalists for publishing things against [former President Alvaro] Uribe.”

Between 2015 and 2017 the number of death threats had more than doubled from 59 to 129, according to FLIP. This year, the number of threats has allegedly increased again.