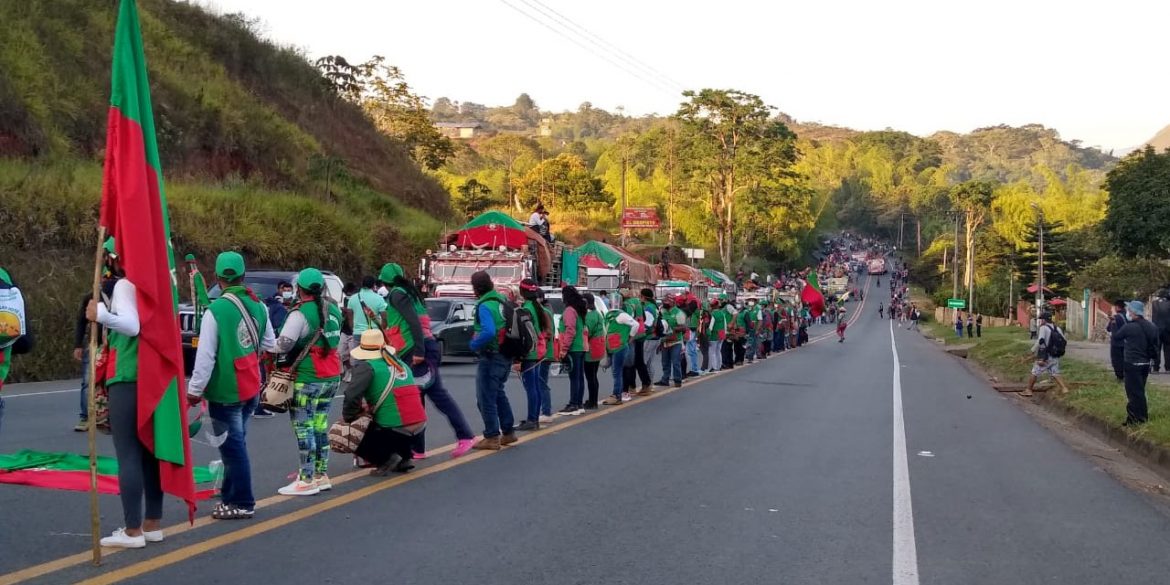 Indigenous from southwest Colombia mobilize to demand talks with president

Indigenous peoples from southwest Colombia arrived in the city of Cali on Monday, the day Christopher Columbus set foot in the Americas, to demand talks with President Ivan Duque.

The far-right president has so far refused to meet with native Colombian leaders to talk about ongoing violence and structural state neglect and has shown no interest in doing so this.

Before traveling to Cali, indigenous authorities warned that “if Duque doesn’t come to Cali, the ‘minga’ will come to Bogota,” the capital.

We gather with dignified rage against the violence and murders, and we gather with love for our territories, and all our sisters and brothers who live in Colombia and dream of a dignified and just life.

Interior Minister Alicia Arango traveled to Cali to meet with the leaders of the native Colombians who said 7,000 of them had temporarily settled in Colombia’s third largest city.

According to Arango, the government “has complied with the commitments obtained by the minga during this and former governments.”

Notwithstanding, “we haven’t had a concrete response so far” about the debate the indigenous seek with the president over peace policies, and respect for their rights and their autonomy, according to indigenous leader Gilberto Muñoz.

Colombia’s indigenous, particularly those from the southwestern Cauca province, have been subjected to extreme violence by drug traffickers and illegal armed group that want to use their autonomous territories to traffic cocaine to exit points along the Pacific coast.

The violence, combined with government neglect, has made Colombia’s indigenous peoples victims of a genocide, according to their leaders.

According to the indigenous, they will wait for the president in Cali for three days after which they will travel to Bogota in an attempt to force Duque to engage in talks he called off at the last minute late last year.

The organizers of these protests said they will organize another national strike on October 21.