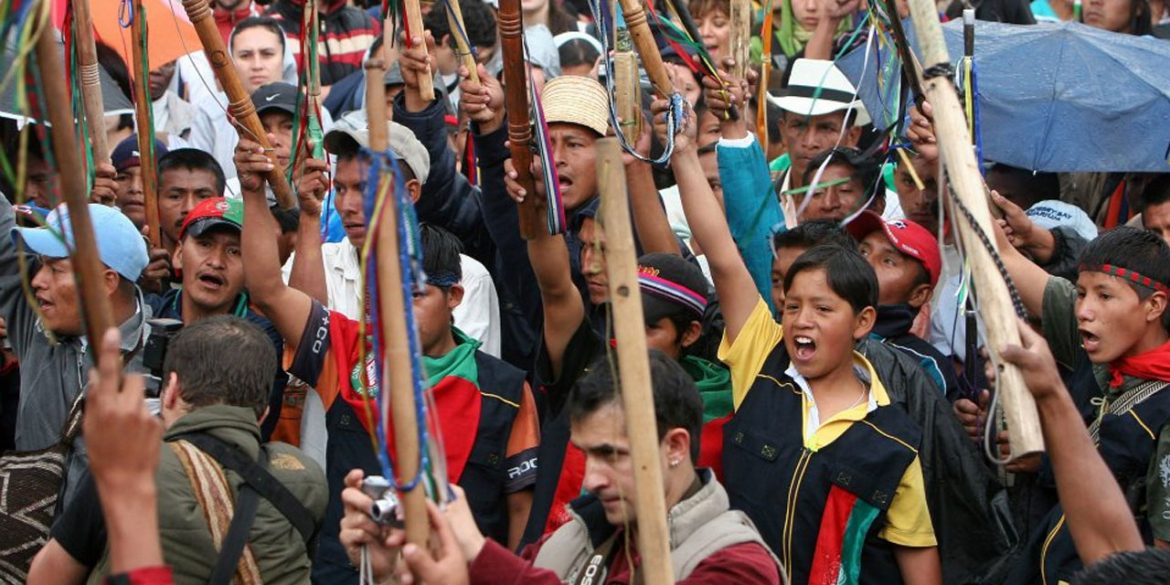 The guards of the indigenous people in northern Cauca are armed only with ceremonial canes. (Image: CRIC)
News

Organizations from throughout Colombia decided to implement self-protection measures amid government failures to provide security in the countryside.

After a week of demonstrations and talks at the “humanitarian refuge” in Bogota, thousands of social leaders decided for these security measures while continuing to persuade the government to take action against the mass killing of social leaders.

The government officially has a few proposals and mechanisms which it has in process, it needs to be understood that the right to life is urgent. This cannot be solved only by a working group. We need action, so self-protection is the focus, but also how we can play a role in the public politics, growing norms which make real and effective the right to life of human rights defenders.

During the first trimester of 2019 (Jan to March), there were 245 acts of aggression targeting community leaders and human rights defenders, a 66% rise from the same period during 2018.

A number of groups shared their stories at the week-long demonstration, and met with the United Nations, the European Union, the Inspector General’s Office and the Ombudsman’s Office.

The administration of President Ivan Duque shone in absence.

While the state does not bring us protection, the only thing we have as human rights defenders are our own plans of self-protection. When the attacks from illegal actors intensified, we were already strong as an organization, which is one of the keys of self-protection in communities: to have a solid structure and clear rules of the game.

Numerous groups came together to create a coordinated strategy which all of the leaders present would take back to their territories, strengthening coordination between themselves, the UN and the governmental human rights offices.

The indigenous guard of the Cauca region, a group which has come into the eyeline of armed groups repeatedly, were a leading voice in the demonstration.

At one moment armed groups no longer wanted to respect indigenous territories, they were violating human rights, executing community members, kidnapping and attacking the civil population.

The work of the guard is more important than ever, Sauca said, but more dangerous. Maintaining the autonomy of the guard, and means of unarmed self-protection and justice would be key to the context of the indigenous guard.

Some steps were, however, taken toward integrating protection concerns of social leaders into mainstream politics: meetings were held with embassies, and the issue was made more visible than ever on the international stage.

Redepaz president Luis Emil said it was about a holistic approach, strengthening groups in themselves and together, with tools, technology, and information systems, as well as a campaign sensitizing both the national and international communities to the key role of social leaders, and the challenges they have faced after the demobilization of guerrilla group FARC, which controlled much of Colombia’s territory until 2017.

Guevara argued that the protection of social leaders requires a significant investment of resources that are not in the National Development Plan. For example, the National Protection Unit (UNP) that protects threatened individuals, needs at least an extra $300,000 to cover the expanding threats.

The situation for social leaders became all too visible this week in southwest Colombia, as a group of armed men tried to assassinate Francia Marquez, an environmental and black rights activist who won the prestigious Goldman Environmental Award last year.