How to prevent eternal war with Colombia’s ELN rebels

According to the Fundacion Ideas Para La Paz (FIP), a military defeat of the ELN is “improbable”

In fact, all previous attempts to achieve this failed and at this point “could lead to a low-intensity war with high humanitarian and environmental costs,” according to the think tank.

The FIP confirmed claims by think tank Paz y Reconciliacion that the guerrillas have only become stronger since Duque took office.

The FIP was fiercely critical of the government’s denial of armed conflict in Colombia while increasing tensions with the socialist governments of neighboring countries who facilitated the first peace talks with the 55-year rebel group in 2017.

According to the think tank, this could have an adverse effect as it could promote an ideological unification between the ELN and foreign forces, making the guerrillas an even bigger threat.

Additionally, the think tank said, Duque’s decision to suspend peace talks played in the hands of radical factions within the decentralized guerrilla group that were skeptical of a negotiated solution in the first place. 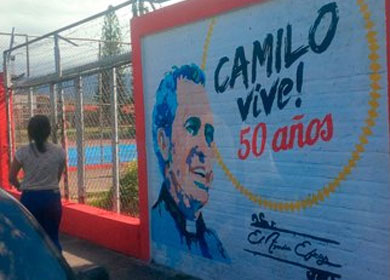 The governor of the Venezuelan border state Tachira reportedly commissioned a mural in the honor of ELN founder Camilo Torres. (Image: La Opinion)

The think tank said that particularly the broken relations with Venezuela were detrimental to Colombia’s national security interest and efforts to effectively combat the group.

Not only has this ended the possibility of joint operations from the group, it has made the Colombian state a common enemy of both the Venezuelan government and the ELN, according to the FIP.

Furthermore, the think tank concurred with the International Crisis Group that the instability in Venezuela and the ELN’s increased activity on both sides of the border increases the risk of accidental military confrontations.

The FIP made it no secret it had little faith in talks between the two warring parties, considering the current situation.

The necessary conditions for a process of dialogue, based on the recognition of the political nature of the conflict, are not on the table. On the contrary, signs indicate that the ELN’s most radical wing has gained strength — in the face of the isolation of the moderate wing — while the government has toughened its position. In addition, the role of third parties has weakened as a result of diplomatic tensions with countries that played a role in the talks. The political crisis in Venezuela, as a destabilizing factor for Colombia, has generated favorable conditions for this guerrilla to strengthen its influence beyond the border, while there are no channels of communication and cooperation between the two countries.

Nevertheless, the group stressed the necessity of a number of measures that would improve the humanitarian situation of civilians and changes of a resumption of talks.

First and foremost, the FIP urged both parties to “to make progress on confidence-building measures, which contribute to the de-escalation of armed confrontation and preserve the possibility of dialogue.”

For example, the think tank urged the guerrillas to consider a plea by the Catholic Church to surrender hostages and consider unilateral ceasefires.

In order to restore the credibility of the government, the FIP considered it elementary that the Duque administration complies with a 2016 peace with demobilized rebel group FARC, particularly in regards to development in war-torn areas.

The think tank also asked the government to reconsider its stance on Venezuela’s government to reduce the risk of escalations and have some control over Caracas’ approach to the guerrillas on the Venezuelan side of the border.

Additionally, the FIP stressed the importance of the involvement of third parties and restore the damages relations with guarantor countries Norway and particularly Cuba, which is currently hosting the ELN’s peace negotiators.

It is urgent that the moderate wing of the ELN — now in Cuba — gains space and arguments within their organization, which necessarily involves formalizing their stay on the island, exploring mechanisms to continue internal deliberations and efforts to re-establish a space for dialogue. Their isolation benefits the radical wing and is detrimental to a negotiated solution.

Last but not least, the FIP urged both the ELN and the government to take into account a possible fracturing of the increasingly disperse guerrilla group, which could shift the loyalty of some of the ELN’s units to criminal rather than ideological interests.