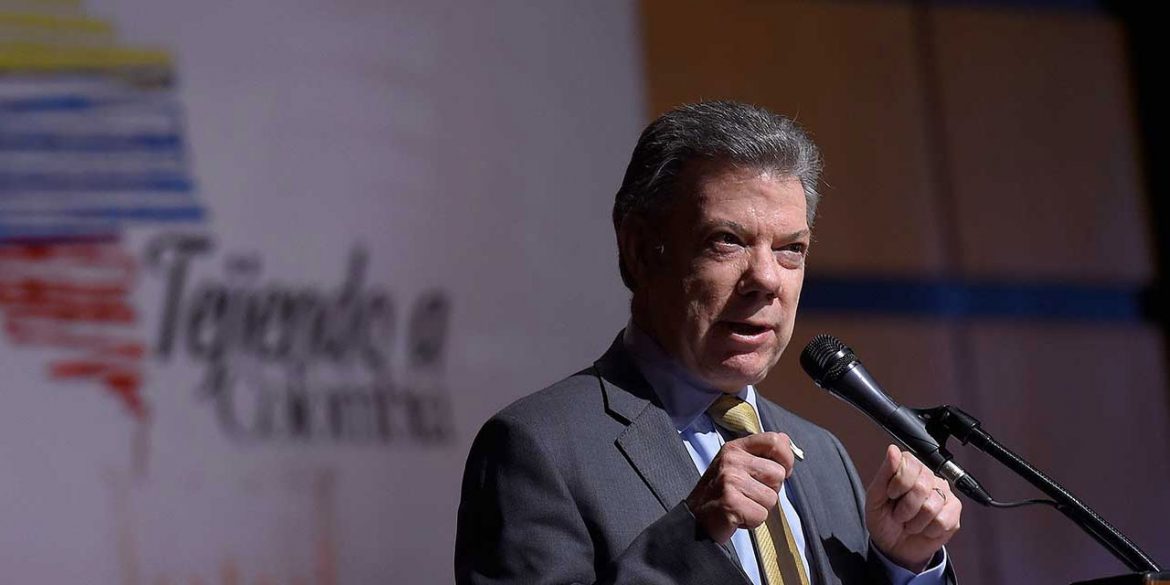 How Santos is trying to save Colombia’s peace process

President Juan Manuel Santos on Tuesday issued a number of emergency decrees to prevent the collapse of Colombia’s peace process and curb a surge in violence.

Among the measures are a plan to protect social leaders, a push to reintegrate demobilized guerrillas and external oversight to prevent the embezzlement of funds for the peace process.

The security forces are additionally working on new strategies to effectively curb drug trafficking that seems to have spiraled out of control despite help from both the US and the UN.

The government is negotiating peace with the ELN guerrilla group while waiting for Congress to approve legislation that would allow the demobilization of the country’s largest illegal armed group, paramilitary group AGC.

Santos promised urgent measures last week after both the FARC and coca growers threatened to abandon the process.

The FARC’s leadership is furious about the arrest of “Jesus Santrich” who is accused by the United States of conspiring to traffic 10 tons of cocaine.

“A considerable number” of the 7,000 guerrillas who had signed up for a reintegration process “have abandoned the territorial spaces,” the United Nations said in December last year already.

While some of the 26 reintegration projects are successful, more than 1,200 former FARC members have rearmed and joined dissident groups, independent observers say.

The rearming of dissident groups adds to violence that has surged in some of the areas that were previously controlled by the FARC.

Coca growers federation COCCAM said in February that more than 200 farmers have been murdered since peace was signed in November 2016.

Victim and community organizations have also come under attack and are desperate. Homicides in Antioquia, one of Colombia’s most populated provinces, went up 33% in the first three months of 2018 compared to the same period last year.

The United Nations’ human rights office in Colombia said weeks ago that it “registered a total of 441 attacks including 121 killings” of social leaders, many of whom were directly involved in the peace process.

The decree followed a reorganization in the security forces to assume control over former FARC territory and a security strategy for more than 150 priority municipalities.

The latest decree seeks to strengthen local and regional authorities and “create a model for the collective protection” of leaders and their communities.

The authorities are going to have to protect not an individual person, but specific communities. It is a more democratic model of protection that will offer greater guarantees to Colombians, especially social leaders and human rights defenders in areas where murders have been occurring in recent years.

Vice-President Oscar Naranjo on Tuesday announced emergency measures to increase efficiency and fight corruption in the execution of the peace process.

The manager of the fund to finance the peace process was fired last week after the prosecutor general’s office announced investigations into alleged embezzlement of funds.

Foreign sponsor countries have complained after the government failed to execute any development projects.

Santos ordered the formation of a work group to “accelerate the 35 productive projects” that would benefit some 1,533 demobilized guerrillas.

The Vice-President also said that effective immediately, the government would make all public contracts related to the peace process public.

Too little, too late?

Whether the announced measures can save the peace deal a year and a half after it came to force remains to be seen.

A new congress is set to take office in July and Santos will leave office the month after. The new administration is likely to replace many key officials.

The security forces seem to be in disarray after multiple reorganizations and investigations into the mass killing of civilians, drug trafficking and corruption.

The possible election of conservative former Senator Ivan Duque is further increasing insecurity about the future of the peace process with the Marxist FARC and victims.

The conservative candidate and his political patron, the hard-right former President Alvaro Uribe, have been opposing the process for years and “might risk re-fueling the 50-year long conflict and disrupt economic activity,” according to economic think tank FocusEconomics.

Furthermore, abandoning the peace process could spur confrontations with the constitutional court, the United Nations and the International Criminal Court.