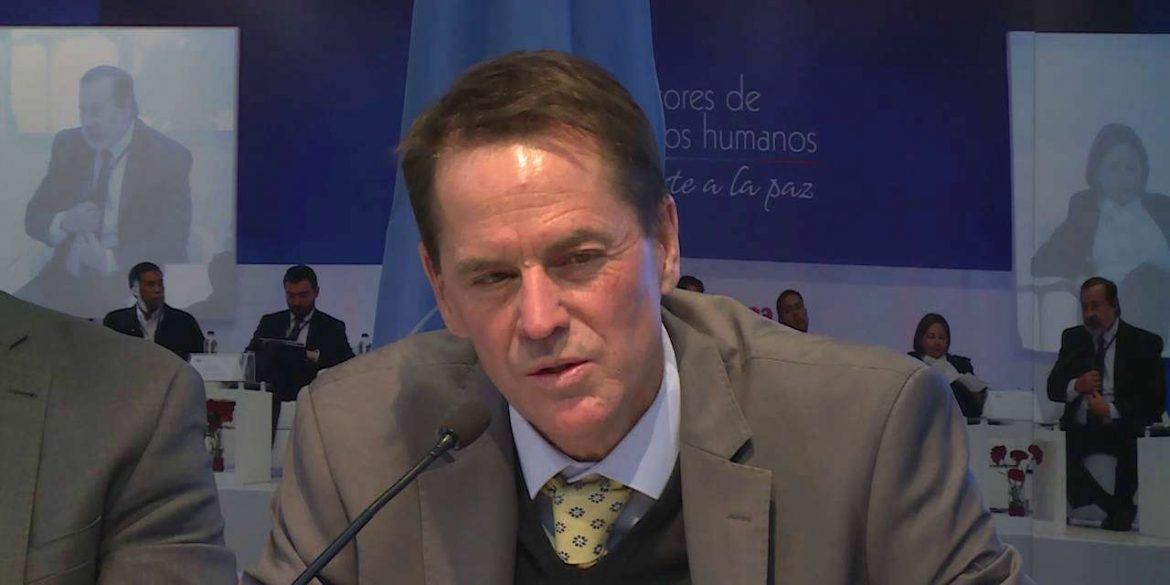 The United Nations on Friday bashed Colombia’s failures to carry out a peace process and warned for intervention of the International Criminal Court.

The international organization said it was “extremely concerned” over an increase in killing of social leaders in Colombia, and blamed disinterest and corruption for impeding peace in the country.

In the blistering report, the Office of the UN’s High Commissioner for Human Rights accused the military of involvement in criminal activity like drug trafficking and illegal gold mining.

The state’s failure to assume its basic duties and implement a peace deal with demobilized FARC guerrillas has increased violence against social leaders, particularly human rights defenders, according to the UN.

The UN office said that high-ranking government officials “interpose their personal and career interests over the rights of the population.”

The power vacuum that followed the demobilization of FARC-EP; the lack of an integrated State presence; and delays in the implementation of the Agreement allowed illegal and criminal groups to enter areas and take over the illicit economies that had not yet been transformed leading to increased violence. Several of the victims were apparently killed due to their support for policies derived from the Agreement, such as substitution of illicit crops and the integral rural reform. This constitutes a new tendency in the motives for killings. In previous years, most human rights defenders were killed because of their opposition to Government policies, not for their support of them.

The international organization accused the security forces, particularly the National Army, of executing civilians to falsely present them as killed guerrillas or criminals.

“The high levels of impunity in cases of corruption in the past have encouraged the persistence of such practices within the armed forces,” the UN said.

OHCHR obtained information on acts of corruption allegedly perpetrated by members of the military linked to fuel-smuggling in Norte de Santander. According to Ecopetrol, 1,800 barrels were stolen in the first nine months of 2017. There are numerous allegations of armed forces involved in facilitating transport of material to produce cocaine and machinery for illegal mining. Corruption by members of the armed forces can empower economically criminal groups and other armed groups.

The UN called on the state to “correct aspects of the Integrated Transitional Justice system that are not in conformity with international standards” of face the possible intervention of the International Criminal Court (ICC).

A team of the ICC reportedly traveled to Bogota this week to inquire about progress in the prosecution of 23 generals and six corporals accused of complicity in the mass killing of civilians.

The international organization explicitly criticized Congress for blocking magistrates of war crimes tribunal JEP and the Constitutional Court for shielding “non-military State agents and private individuals from the scope of mandatory application of the system.”

OHCHR is deeply concerned as the expectations created by the Integrated System to reduce impunity for violations of human rights and international humanitarian law are undermined by the exclusion of non-military State agents and private individuals from the scope of mandatory application of the system. Moreover, despite OHCHR efforts, the definition of penal responsibility of military superiors established in the Legislative Act 01 of 2017 and in the Statutory law of JEP does not comply with international standards. The Prosecutor of the International Criminal Court warned that this circumstance “could frustrate the efforts of Colombia to observe its duty to investigate and sanction international crimes.”

Urgent measures to save peace process

The UN urged Colombian authorities to “increase their efforts to prevent, prosecute and punish cases of corruption of civil servants and political representatives.”

The international observers additionally urged the Prosecutor General’s Office to “to investigate and adopt adequate administrative and disciplinary measures regarding delays in the implementation” of the peace process with the FARC.

In order to prevent international intervention, the UN urged to “correct aspects of the Integrated Transitional Justice system that are not in conformity with international standards; to secure funding for the mechanisms created; and to allow for the effective participation of the victims.”

The international organization has been monitoring the peace process with hundreds of observers since before peace with the Marxist FARC group was signed in November 2016.

The peace process has been opposed by conservative and far-right political forces, organized crime organizations and, to a lesser extent, the ELN guerrilla group.

The conflict that preceded the process cost the lives of more than 250 thousand Colombians. More than 80,000 are missing. Millions were displaced, mainly by far-right paramilitary groups.