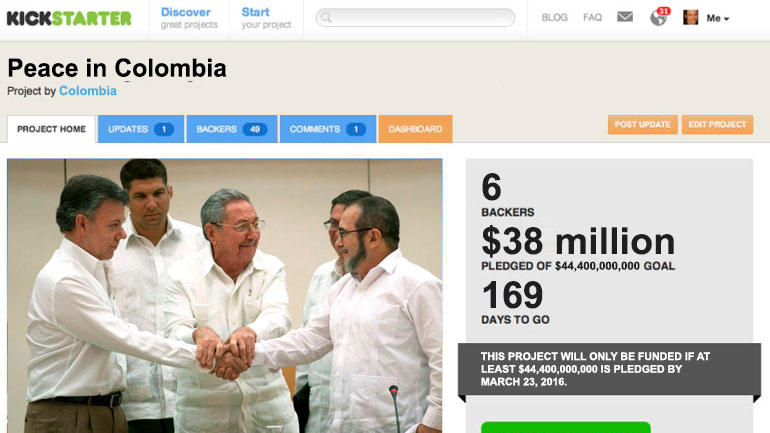 How Colombia plans to pay for peace in times of austerity

Colombia is set to begin a second diplomatic offensive to convince other countries to contribute to peace building in the country that seeks to end a 51-year-long war while dealing with a strong economic slow-down.

However, falling oil prices have severely affected the government’s revenue and financial situation since then, forcing the administration of President Juan Manuel Santos to resort to a policy of austerity.

Additionally, the dropping commodity prices spurred a major peso drop; the COP90 trillion that was worth more than $44 billion in October last year is now only worth $30 billion.

Finance Minister Mauricio Cardenas told press last week that “peace is closer than it has ever been in five decades,” but that “there will be costs” and international donations will cover a “significant figure” of those expenses.

The minister has a six-month deadline to accumulate the funds necessary for peace as Santos and FARC leader “Timochenko” vowed to sign peace before March 23 next year.

Getting the money together

So far, it’s been difficult for the administration of President Santos to get significant amounts of money together because Colombia is not the only one in the world facing economic hardship.

The country has met a lot of verbal goodwill, but hardly any concrete promises have been made about Santos’ “Marshall Plan for Colombia.”

Cardenas told press last week that he has spoken with various countries and organizations which have expressed an interest in helping Colombia reach peace.

The Finance Minister explained that the president of the World Bank, Jim Yong Kim, “expressed his commitment to helping Colombia finance the post-conflict,” and added that the bank would provide “not only resources but also knowledge.”

The president of the Inter-American Development Bank (IDB), Luis Alberto Moreno, told reporters after a meeting with Colombian President Juan Manuel Santos that the IDB would work with Colombia on a fund for environmental conservation and agricultural production.

Some of the money will come from the US who announced on Thursday that they will redirect their funds for ‘Plan Colombia’, an anti-drug trafficking initiative, towards post-conflict projects.

The US to redirect counternarcotics aid to Colombia post-conflict programs

The US has already invested billions of dollars in military aid for the fight against drug trafficking rebel groups like the FARC and ELN and, according to Secretary of State John Kerry, is now “working to give a new direction to those plans.”

Last year, US aid to Colombia consisted of $258 million down from $610 million a decade before.

How many dollars the US wants to make available for the Colombia’s peace process is unclear.

The European Union in June agreed to create a post-conflict fund, but this fund is still empty.

Only the World Bank has promised $38 million, not even a tenth of a percent of what Barreras had calculated necessary.

Too early or too late?

According to the Finance Minister, it is too early to determine the total quantity of resources Colombia will need because the peace negotiations have yet to reach their conclusion.

Nevertheless, Cardenas emphasized that the finances must be organized “within the next six months”, the deadline given to the negotiators to sign peace.

The minister announced that the government will be embarking on a second diplomatic mission to again seek the funds necessary to finance the transformation of a country that’s lived in war for 51 years to a country in peace.

The president began this second offensive in Washington, immediately receiving support from the US and stressing the importance of peace before world leaders united at the UN General Summit.

Santos told them that a peaceful Colombia will contribute to the global fight against climate change, extreme poverty and drug trafficking, suggesting that Colombia’s peace is a worthwhile investment.