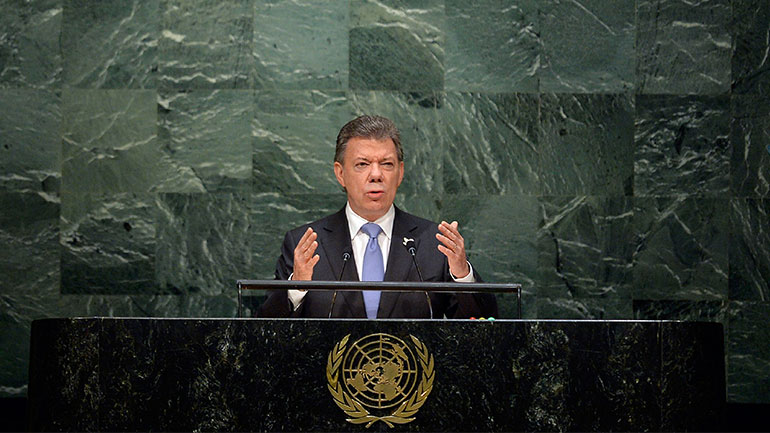 Colombian president Juan Manuel Santos told the UN General Assembly Tuesday that peace in his country will lead to global benefits for matters such as the fight against climate change, illicit drugs, extreme poverty and resolving other global conflicts.

Santos gave a speech on Tuesday at the 70th regular session of the General Assembly of the United Nations in which he assured that the final peace deal will be signed within six months following the recent development of the signed justice deal.

Santos insisted on the plethora of secondary benefits peace in Colombia would bring: “A peaceful Colombia will be a positive factor for the world in such diverse, although related, matters such as the fight against climate change and against illicit drugs, security and the eradication of extreme poverty.”

The Colombian president told the General Assembly that his country is the most bio-diverse for its size and that it is also very vulnerable to the effects of climate change. Therefore, by the end of his presidential term in 2018, after peace has been established, Santos will aim to have protected over 20 million hectares of Colombian land.

Colombia is currently the world’s largest producer of cocaine so steps taken to eradicate the production will bring global benefits.

President Santos told the Assembly that last week after three years of negotiations the government and the FARC reached an agreement on the agenda point which had represented the “the biggest obstacle” to the peace deal.

Santos reminded the UN of the delicate and difficult balance between reaching a lasting peace and bringing war criminals to adequate justice. The Colombian president believes that the justice deal signed on Wednesday strikes such a balance; “we are achieving our objective: the maximum justice that a transition to peace will allow us.”

The transitional justice deal includes the creation of a Special Jurisdiction for Peace which will investigate military, paramilitaries, State officials, guerrillas and civilians suspected of crimes committed during the civil conflict.

The deal also outlines the maximum prison sentences and guarantees the truth, justice, reparation and no repetition essential to the closing of the final deal.

Santos emphasized that this is the first time in the global history of armed conflicts that a government and an illegal armed group are creating together a system of accountability with a national court designed for the investigation of serious crimes.

Out of the more than 20 armed conflicts currently afflicting the world, Colombia’s is the only which is on the way to a final solution, according to Santos, and is a “light of hope in a world darkened by war, violence and terrorism.”

Santos told the UN that Colombia’s peace process to resolve the latest and longest armed conflict in the country and the entire western hemisphere “could be used as a model for other armed conflicts across the planet.”

The president thanked the international community for their continual support of Colombia and its peace process, a “difficult but not impossible mission.” Santos also acknowledged the statement that Pope Francis made to the United States Congress, citing the “courage”, “audacity” and “responsibility” with which Colombia is handling the situation.

Santos announced to the General Assembly that the final peace deal will be signed by March 23, in other words within six months, and that the FARC will start the disarmament process within 60 days after this date.

In this context Santos expressed his optimism for the coming year; “next year, when I return to this Assembly, I will do so, God willing, as president of a peaceful Colombia, of a reconciled Colombia.”

The Colombian president called upon Colombian and global citizens alike to work towards peace which is, “a great process of collective cultural transformation.”

Santos urged Colombians and the countries of the United Nations to support this “generous opportunity for peace”, saying that “the most valuable legacy that we can give to our children, to future generations, is peace.”

Peace talks have been taking place in Havana, Cuba between the government and the FARC since November 2012 in order to resolve the 51-year-long civil conflict which left 260,000 Colombians dead and over 6 million displaced.