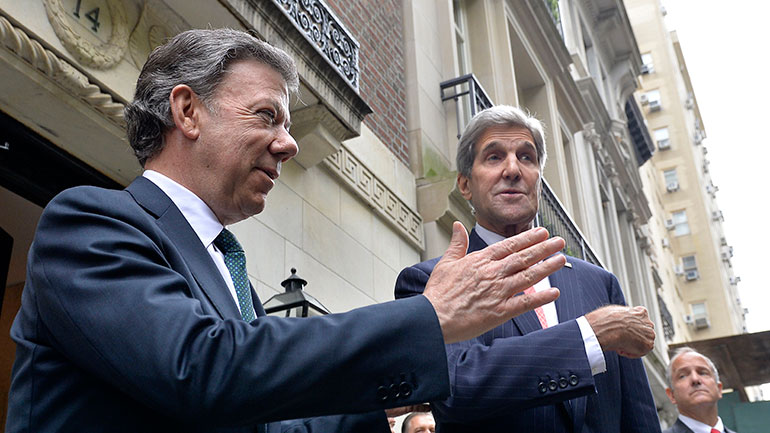 Colombia and the United States agreed on Thursday that Washington aid to fight drug trafficking will be used for peace building in the event the administration of President Juan Manuel Santos signs peace with FARC rebels.

The decision was announced after Santos visited US Secretary of State John Kerry in Washington D.C.

The US over the past 15 years has invested billions of dollars in the fighting of narcotics. The majority of the funds in “Plan Colombia” were for military aid that supported the Colombian state’s fight against leftist rebel groups like the FARC and the much smaller ELN.

“We are working to give a new direction to those plans,” Kerry told press after his meeting with the Colombian president.

Both the FARC and ELN are heavily reliant on the drug trade to finance their attempted revolution and have promised to abandon the illicit trade in the event of peace.

According to the Colombian head of state, the US aid used currently to fight the drug trafficking rebels will be reallocated to support social programs to support peacebuilding in the country that has had an internal armed conflict since 1964.

“The United States has just offered to contribute funds for the post-conflict” projects that include crop restitution programs for farmers who depend on coca, the main ingredient for the production of cocaine.

Other post-conflict projects that according to Santos can count on US support are social and environmental conservation programs, Reuters reported.

Santos and FARC leader “Timochenko” last week announced to sign a final peace agreement within six months while talks with the ELN are expected to be formalized soon.