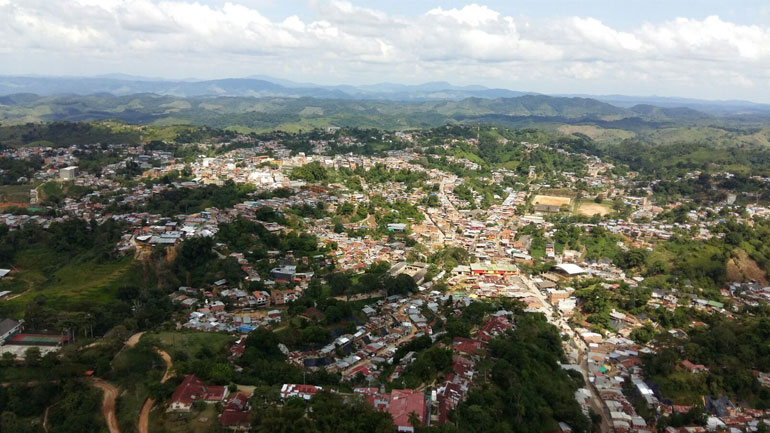 The tensions between the paramilitary groups are related to Gran Colombia Gold mines in Segovia, one of numerous mining towns in the regions known as Bajo Cauca and East Antioquia.

Gran Colombia Gold contractor Damasa, which employed more than 1,600 miners in Segovia, was forced to abandon activities in the town in October last year after a mining leader was killed and others received death threats.

“We have decided to [target] any rat, disobedient, [and] snitch who does not comply and continues to work for Mr. [Edgar] Julio Erazo,” boss of the mining subsidiary, the Urabeños said in a message spread through pamphlets and social media platform Whatsapp last year.

The Urabeños’ threat came at a time that Gran Colombia Gold and local government authorities were seeking the closure of illegal gold mines in the town while local artisan miners were negotiating the legalization of others.

Locals, many of whom employed in the mines, took to the streets immediately to protest the threats and employees of Damasa convinced their executives to keep operations running.

Defying the Urabeños threat, the workers returned to the mines, now under heavy police and military protection.

Illegal armed groups like the Urabeños have been accused of extorting and financing illegal mining operations in the region around Segovia and would be negatively affected if illegal mines are either closed or legalized.

However, since the Urabeños opened the attack on the Gran Colombia Gold subsidiary and those who work for the company, the violence and terror imposed on the locals of Segovia has only intensified.

Four people were assassinated in a massacre in the town’s 20 de Julio neighborhood on February 23.

Local police told press that the victims were members of the Urabeños who had come together to form a new illegal armed group that would challenge their former superiors’ control over the area.

In spite the massacre, the New Generation of Segovia announced its formation two days later and immediately declared war on the Urabeños. 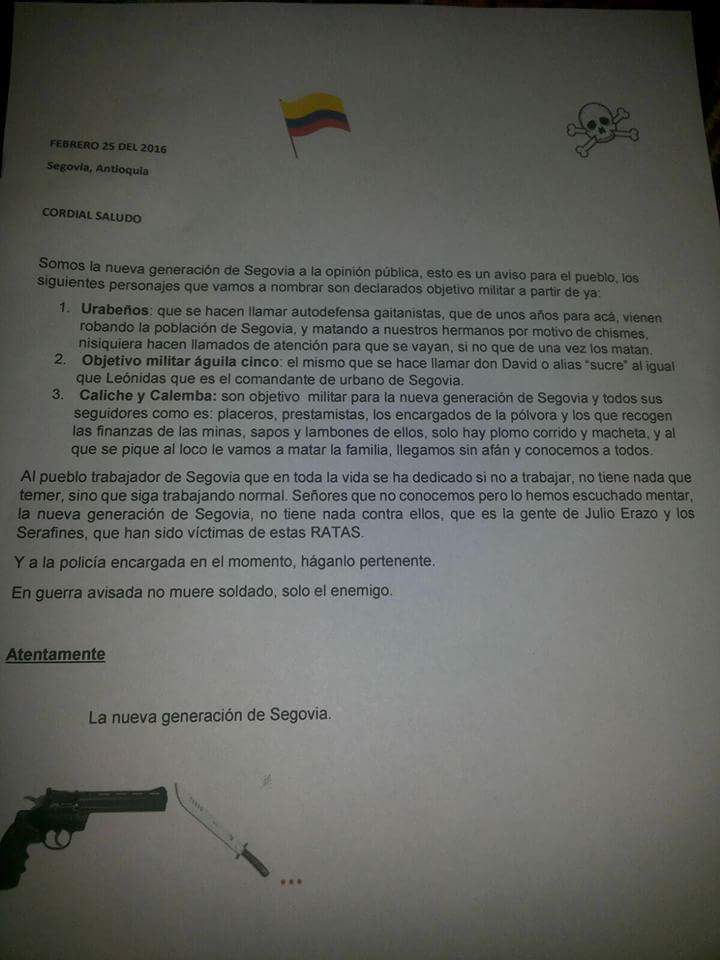 Pamphlet sent out by the “New Generation of Segovia”

The latter was arrested on March 18.

The group also called on local police to “do the right thing,” warning that “in an announced war, no soldier gets killed, only enemies.”

The anti-Urabeños pamphlet was responded by another statement, this time sent by “La Mano Que Limpia,” a relatively unknown group that has threatened people in other parts of Colombia before.

Their pamphlet began spreading on March 11 and, like the Urabeños, threatened members of the Mining Table, who had been negotiating with the local government and the Grand Colombia Gold subsidiary about the closure of some and legalization of other mines. 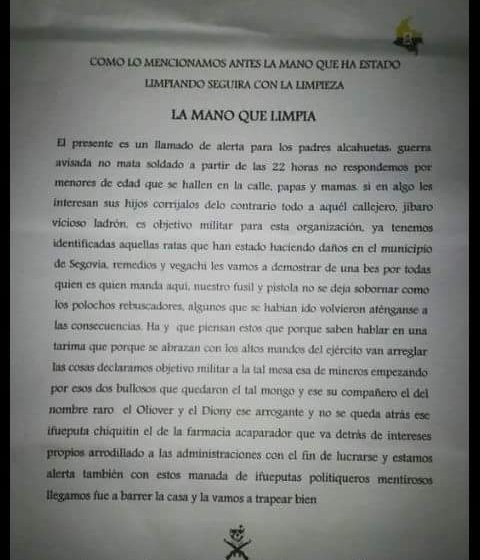 Fearing a repetition of last year’s killing spree, the town entered in a state of terror on Friday when Don David, one of the alleged Urabeños leaders in the region, was arrested in a hospital in Caucasia, a mining town some 70 miles north of Segovia.

Only hours after the arrest, a dismembered body was found in a rural part of Segovia, according to Mayor Gustavo Alonso Tobon and Victoria Eugenia Ramirez, the top official on public security issues of the Antioquia Province.

Amid rumors that the Urabeños or La Mano Que Limpia had begun assassinating miners that had been collaborating with the government, “the Mining Secretary called me to confirm that this person makes no part of the Mining Table. It could be a miner, but it is not one of the people who have been threatened,” the mayor told local news website El Palpitar.

The top civilian security official said that security forces would increase their presence in Segovia and that a special investigation team would be set up to investigate other pamphlets that have been spreading over social media.

Curiously, the office of Ramirez’ direct superior, Governor Luis Perez, said Saturday that “there has been no homicide or the finding of a dismembered person in Segovia as has been reported.”

Perez has long been accused of maintaining ties with regional organized crime groups. None of these allegations have been proven and have categorically been rejected by the senior politician.

Meanwhile, the locals of Segovia have to continue living in terror, now with two rival neo-paramilitary groups vying for the revenue of illegal gold mining and the extortion of artisan miners.