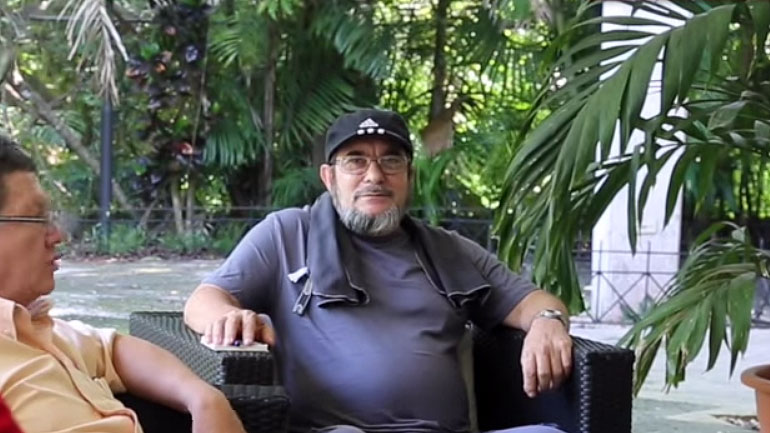 The supreme leader of the FARC, Timochenko, arrived in Cuba on Wednesday, reportedly to meet with Colombian president Juan Manuel Santos. Both could be announcing a date for a final peace accord or a partial accord on transitional justice.

The FARC, Colombia’s largest rebel group announced on Twitter that with the arrival of Timochenko, “peace has arrived.”

Colombian President Juan Manuel Santos announced earlier that day he was also on his way to Cuba to meet up with the negotiators who have been trying to formulate a peace deal since November 2012.

The president said his trip was meant to attend to “a key meeting with negotiators in order to accelerate the end of the conflict.”

According to French news agency AFP, an anonymous member of the FARC’s peace delegation said that Santos and Timochenko will both meet with Cuban President Raul Castro at 4PM Colombian time.

Newspaper El Tiempo, which has close ties to the Santos family, reported that Santos and Timochenko will be making a public announcement in regards to accords on victim compensation, transitional justice and the date on which Colombia’s oldest rebel group and the government will sign a deal that would put an end to 51 years of war.

Other media confirmed that there would be an announcement on transitional justice, one of the thorniest subjects of the talks, but failed to report on a possible announcement of a date for the signing of a final agreement.

Reuters reported that both FARC and government sources had confirmed that Santos and Timochenko, whose real name is Rodrigo Londoño, will be signing the fourth partial accord that would eventually make up part of a final peace deal.

The presidential website early Wednesday morning published a statement highlighting the benefits of a justice deal, but this statement was removed shortly after.

The FARC recently announced that the negotiators, who are assisted by an international panel of jurists, were at the gates of a deal on justice for the tens of thousands of war crimes committed by both parties during the half-a-century conflict.

Negotiators have so far reached partial accords on land reform, political participation for ex-rebels and an end to the illegal drugs trade. The conflict between guerrilla groups, right-wing paramilitaries and the government has killed 260,000 people and displaced millions.