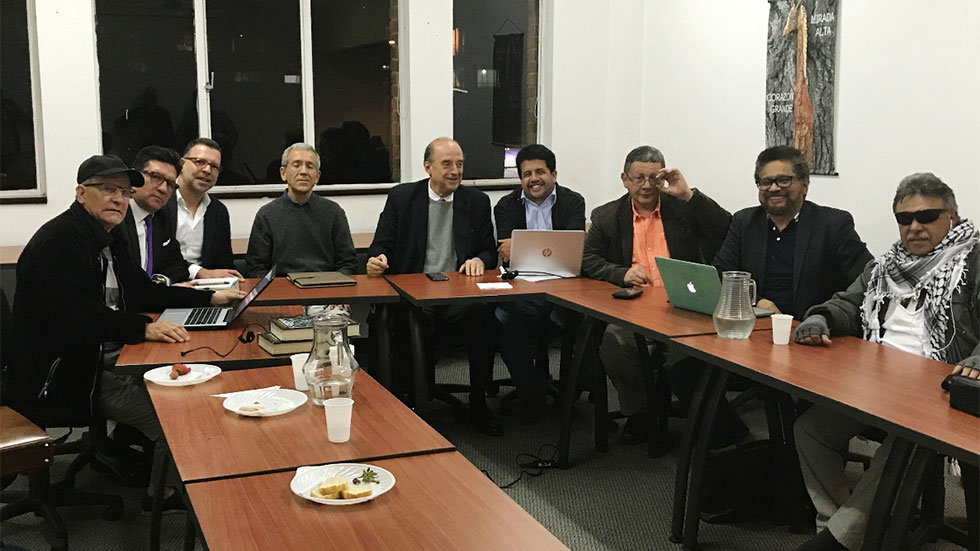 Colombia’s largest disarmed rebel group FARC and commanders of the guerrillas’ former arch enemy, the paramilitary AUC, have agreed to both testify before a Truth Commission.

The historic meeting between two of the main victimizers in Colombia’s 52-year-old armed conflict took place on Wednesday already, but wasn’t made public by negotiator Alvaro Leyva, a senior Conservative Party politician, until Saturday.

At the meeting, the demobilized armed groups that at one point in the conflict jointly made up an estimated 50,000 fighters agreed to fully cooperate with the Truth Commission, the non-judicial branch of the Transitional Justice System that is part of a peace deal.

The inclusion of some of the AUC’s top commanders could considerably increase the clarification of the truth on the war that has left some 8 million victims.

Not all former paramilitary commanders signed the agreement as more than a dozen were extradited by former President Alvaro Uribe to the United States in 2008, in the middle of the AUC’s own truth commission.

The present paramilitary commanders have already served their prison sentences that followed a demobilization deal called the Ralito Pact in 2005.

Former AUC leaders held prison in the US on drug trafficking charges have also said to want to take part in the peace process. Whether their participation has also been secured maintained unclear.

Dissident paramilitary group Gaitanista Self-Defense Forces of Colombia (AGC) has also said it wanted to take part in the process, but so far without a positive response from the government.

The two parties agreed to recognize that peace is an obligation and a right of every citizen, and that reconciliation is the ultimate aspiration of the people.

According to the agreement given to Blu Radio, the three-hour meeting “took place in a climate of respect and distension” without a formal agenda and in the presence of one government and one United Nations observer.

Between 1997 and 2006, the worst years of the armed conflict, the AUC was the umbrella organization of dozens of anti-communist paramilitary groups in a joint attempt to combat the Marxist FARC guerrillas, often in collusion with state forces.

The increased violence led to the worst victimization rates ever recorded in the war-torn country.

Victimization during the conflict

While the FARC had already committed to taking part in the Truth Commission when signing peace with the government in November last year, the AUC commanders’ formal vow to participate is a major gain for victims that seek the truth.

Some 60,000 Colombians continue to be missing after having been “disappeared” and presumably killed by one of the parties in the conflict.

Many of these victims’ families have actively sought to clarify the ultimate fate of their loved ones, but without much success.