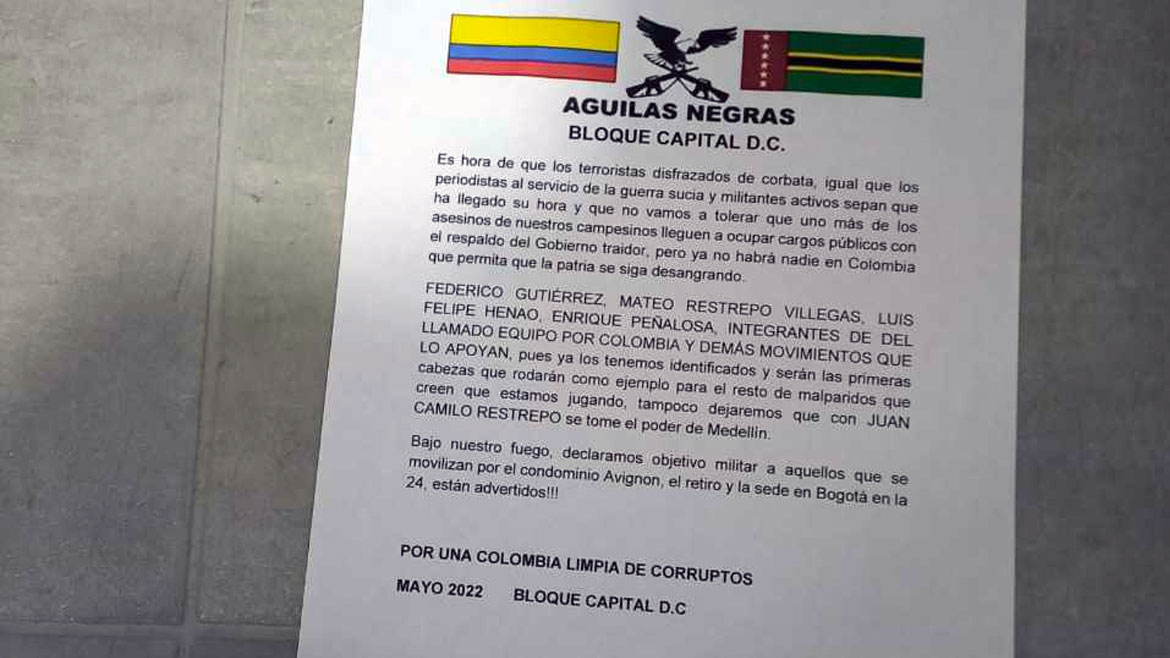 According to Gutierrez’s campaign chief, Luis Felipe Henao, a pamphlet that threatened to kill Gutierrez was sent to their campaign headquarters in Bogota.

Today these threats are reaching us in the urban sector, and they are reaching our campaign headquarters. They have already been reported to the Police and the Prosecutor General’s Office, and we hope to continue fighting for the country. We are confident that our alliance is with Colombians and not with criminals.

The pamphlet signed by the Aguilas Negras threatened to kill the “terrorists disguised behind neckties, as well as the journalists at the service of the dirty war” and members of the military.

It is time that the terrorists disguised in neckties, as well as the journalists in the service of the dirty war and the active military personnel know that their time has come and that we will not tolerate that one more of the murderers of our farmers reach public office with the support of the traitorous government, but there will be no one in Colombia who will allow the country to continue bleeding to death.

The pamphlet also said that we will also not allow that [allegedly illegal interim Mayor] Juan Camilo Restrepo assumes power in Medellin” after the allegedly illegal suspension of progressive Mayor Daniel Quintero.

The pamphlet also accused the administration of President Ivan Duque of being a “traitorous government” after years of supporting the increasingly authoritarian president and his political patron, far-right President Alvaro Uribe.

Gutierrez campaign confirmed the death threat weeks after Francia Marquez, the vice-presidential candidate of frontrunner Gustavo Petro, said that she received as many as three death threats signed by the Aguilas Negras in March.

In response to questions by war crimes tribunal JEP earlier this month, the prosecution reiterated that they believe that the Aguilas Negras are an actual group.

Evidence indicates that some violent activity associated with the far-right group involves extremist members of the security forces.

Some death threats suggest they could have been sent by individual supporters of far-right former President Alvaro Uribe, or by regional forces trying to terrorize social leaders.