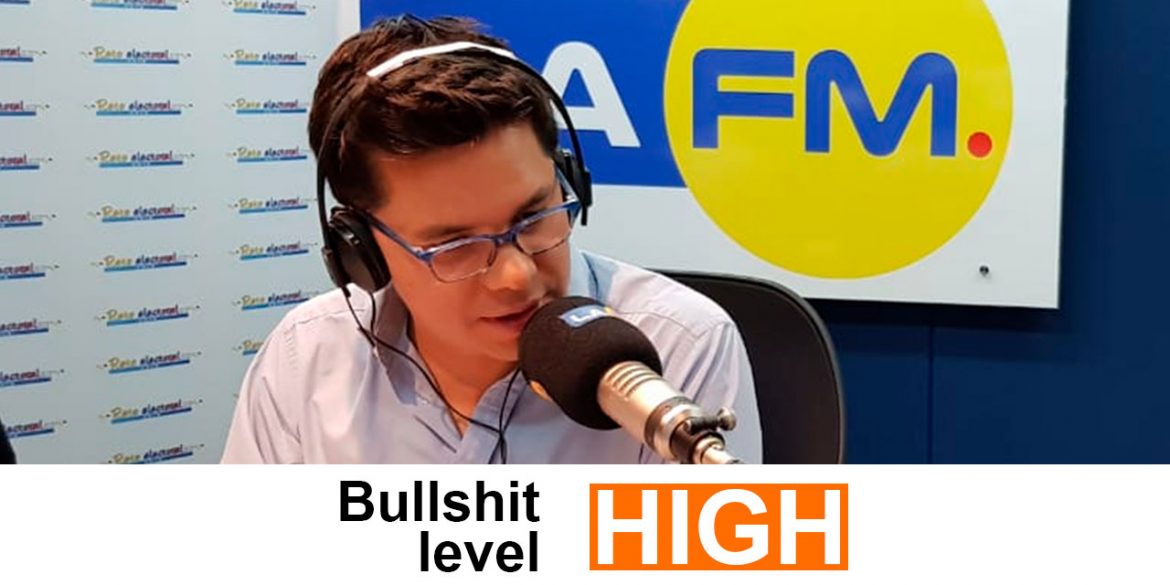 The director of popular radio station La FM, Luis Carlos Velez, has been distorting the truth about Colombia’s anti-government protests, according to fact-checking website Colombia Check.

The perceived distortion of the truth by Colombia’s corporate media has created tensions and even violence between protesters and journalists.

In the case of Velez, his claims have led to several requests to fact-check the jet-set media executive, which didn’t turn out so well; the director of La FM has made multiple false and disputed claims.

Velez has claimed that two members of the security forces have been killed during the strikes and protests.

This has been contradicted by the National Police, who told ColombiaCheck that the only fatality was Dilan Cruz, a high-school student murdered by the police.

The National Police in turn contradicted Defense Minister Luis Carlos Trujillo, who said that in the first night alone three people were killed in the southwestern Valle del Cauca province.

Colombia Reports verified local media, who reported that none of these fatalities were members of the security forces, but civilians reportedly shot dead while allegedly looting shops.

In short, Velez made things up.

For example, Trujillo said after the first day of strikes that 148 soldiers, 122 civilians, and three policemen were injured.

National Police director General Oscar Atehortua said on the 25th that among the injured members of the security forces were 271 policemen and two soldiers, contradicting Trujillo’s previous claims.

In the case of the civilians, the defense minister specified that the majority of civilians were only slightly injured or badly affected by tear gas. No such specification was given about the allegedly injured members of the security forces.

Velez omitted to mention his claims about the injuries were disputed.

Velez has made contradictory claims about the economic losses caused by the protests and strikes, in both cases citing business association Fenalco as his source.

The first claim was based on claims made by the Bogota branch of Fenalco, while the second claim was made by Fenalco’s national director, Jaime Cabal.

The problem with Fenalco is that its director has been making all kinds of outlandish claims, including that the protests were a “systematic destabilization attack on democracy, on Colombia’s economic model” organized by “destabilization leaders, both national and international.”

In this case, Velez should have indicated that the source was unreliable.

On November 29, Velez claimed that 150 bus stations of of Bogota’s mass transit system Transmilenio had been vandalized.

What this claim is based on is unclear; Transmilenio director Maria Consuelo Araujo said two days before that approximately 99 stations had been vandalized.

In this case, it seems the La FM director inflated numbers.

La FM’s reliability and editorial independence have long been the subject of dispute.

The radio station is owned by Carlos Ardila Lulle, whose daughter companies are facing serious accusations of sponsoring paramilitary death squads and apologizing for paramilitary crimes against humanity.