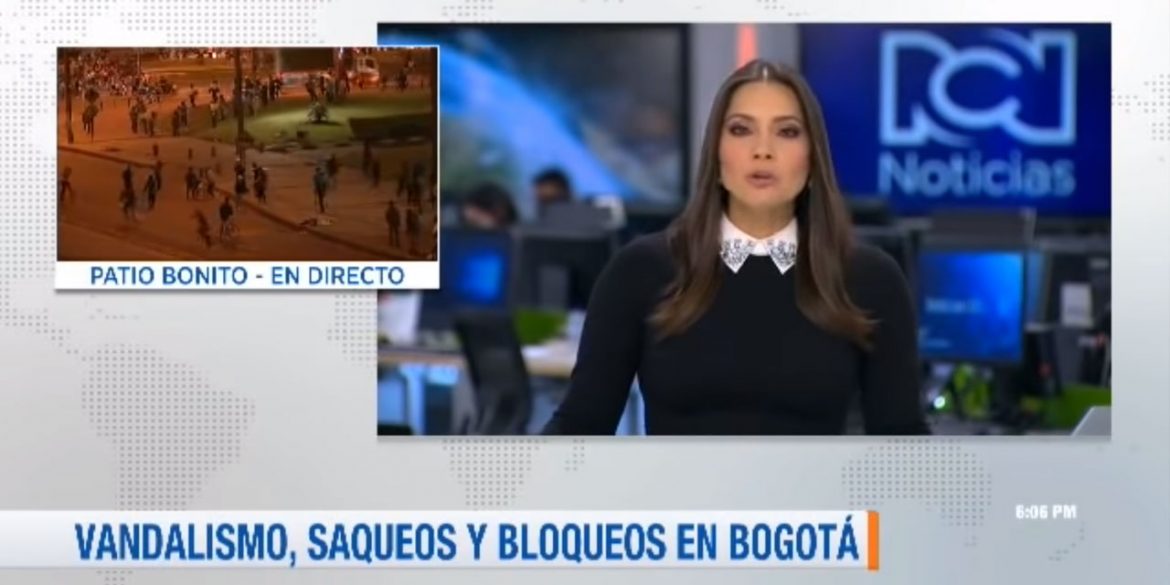 Colombia’s ongoing protests have not just pushed the government, but also the country’s corporate media, into avcorner.

The country’s commercial television networks and leading newspapers, in particular, are under fire over their almost incestuous ties to government and questionable approach to journalism.

Press freedom foundation FLIP has urged protesters not to obstruct journalists, but has also expressed concern over how the growing concentration of power in media and the government is putting the “democratic character of Colombia’s state to the test.”

On of the latest to be loudly rejected by protesters was controversial Spanish columnist Salud Hernandez of weekly Semana, who was called a “fascist” and a “sell-out” while visiting a hospital where protesters had gathered in support of Dilan Cruz, a student who was dying after being shot by police.

“I don’t understand why some of those who gathered around Dilan forced me to leave there with insults and screams,” Hernandez said on Twitter.

“Let me explain. You had nothing to do there, you have applauded the repression. The people are fed up,” social leader Maria Fernanda Carrascal responded.

A day before the incident with Hernandez, a reporter from commercial television network RCN was expelled from a protest in Medellin’s 13th district for reporting for a “paramilitary channel.”

Ahead of the protests, the announcement by Semana columnist Vicky Davila that she opposed the strike resulted in people massively blocking her on Twitter while reminding her that she married into a notorious crime family.

While journalism is supposed to serve the public interest, news outlets in Colombia are notorious for doing the opposite.

Only since the emergence of the internet have Colombia’s news consumers gained access to information by independent media and news agencies that have exposed the country’s corporate media’s conflict of interest.

In one cases, that of RCN, conflicts of interest went so far that it has been accused of papering over acts of terrorism allegedly sponsored by it’s sister company, Postobon, which is accused of financing paramilitary groups that murdered more than 100,000 people, most of whom were innocent civilians.

They testify that this television network and other media were “pleased with the actions of the self-defense groups” for having transmitted interviews in which [paramilitary warlord] Carlos Castaño was described as “the leader of the fight against subversion.”

According to a recent academic study, the country’s newspapers consistently misinformed the public about the armed conflict, which led to widespread misunderstanding of the violence that was terrorizing the country.

After the military and local crime lord “Don Berna” attacked Medellin’s 13th District, in one of the worst war crimes in the armed conflict’s history, newspaper El Colombiano reported that “the people applauded the return of the state.”

Protesters witness how media are distorting the truth

The current protests are making the media’s distortion of the truth only more evident, to the frustration and fury of the protesters.

Last Thursday, when hundreds of thousands of Colombians came home from a day of peaceful anti-government protests, they found the evening news reporting on violent incidents that were promoted by the government to discredit the protest.

On Wednesday, when the country was mourning the death of a protester in Bogota, newspaper El Espectador reported that 340 members of the security forces had been injured in the largely peaceful protests.

Instead of attributing this unverified claim to Interior Minister Nancy Patricia Gutierrez, the newspaper presented it as a fact. How many civilians have been injured in the violent repression of the protests is unknown.

Weekly Semana reported how leftist opposition leader Gustavo Petro was making political gain from the protest while many protesters want nothing to do with Petro, or any politician, for that matter.

This type of reporting created tensions with students while they were protesting against corruption and police brutality in October, and is creating tensions and even violence during the currently ongoing protests.

While the vast majority of cases of physical aggression has come from the police, the FLIP registered 15 incidents of physical and verbal aggression against journalists by protesters in the first week of protests, the press freedom foundation said on Thursday.