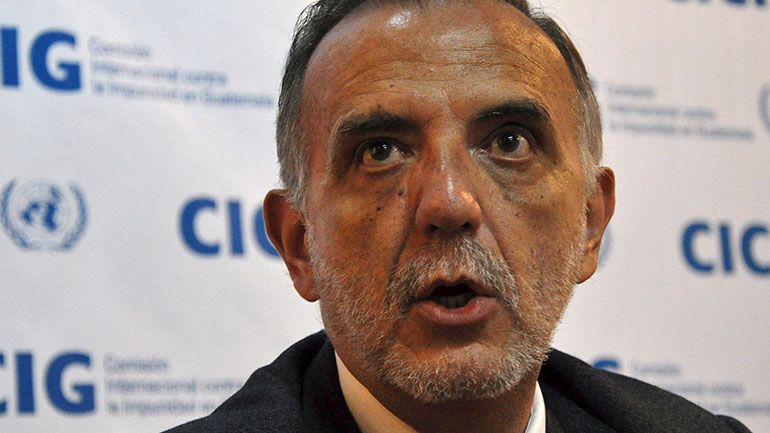 Ivan Velasquez, the chief of the UN commission that spurred the resignation and incarceration of Guatemala President Otto Perez, in Colombia secured the imprisonment of many dozens corrupt congressmen.

Perez was Guatemala’s president until Wednesday, but was forced to resign that day after Velasquez’ International Commission against Impunity in Guatemala (CICIG) and local prosecutors unveiled that the former military general, along with former Vice-President Roxana Baldetti, had received 50% of the profits of a customs-fraud operation that was run by government officials.

Baldetti resigned in May and is also in jail awaiting trial. Perez was taken to court and to prison on Thursday, forcing new presidential elections on Sunday.

The unprecedented legal fist made against Guatemalan corruption followed nine years of cooperation between CICIG and the prosecution that was focused on curbing the influence of organized crime in the higher echelons of the small country’s politics.

Velasquez had joined the UN commission in 2012 and was leading the body since 2014. Since then, he has become a popular hero in Guatemala for taking on rampart corruption practices in the Central American country.

Before becoming a popular hero in Guatemala, Velasquez was a feared jurist in his home country Colombia but hardly recognized as such because his primary opponent was not just a very powerful, but also a very popular man, former President Alvaro Uribe.

The man behind the parapolitics scandal

Born in Medellin in 1955, the jurist led the Supreme Court’s Investigative Support Unit between 2006 and 2012 at the height of a scandal over the influence of paramilitary group AUC in Congress in a scandal that would become known as “parapolitics.”

This unit was investigating many dozens of congressmen and governors who had used the support of paramilitary organization AUC to secure their election to Congress in 2002 and 2006, providing the crucial congressional support for then-President Alvaro Uribe, whose 2002 campaign received financial support from the drug-trafficking paramilitaries.

All this began coming to light in 2006 shortly after the AUC had formally demobilized as part of a peace deal with Uribe.

A computer belonging to one of the AUC’s top commanders, “Jorge 40,” provided a copy of the 2001 “Pact of Ralito,” a treaty between paramilitaries and politicians who sought to jointly “construct a New Colombia.”

The revelation of this pact spurred a judicial onslaught among lawmakers and the disappearance of most parties that had helped Uribe maintain his majority in Congress during his 2002-2010 presidency.

Velasquez led this investigation and became the target of a state-orchestrated persecution when he began investigating then-Senator Mario Uribe, a cousin of the former President.

AUC and government conspire against court

While the DAS, the now-defunct presidential intelligence agency, began illegally wiretapping the Supreme Court, top members of the AUC convinced one of their subordinates, “Tasmania,” to publicly claim that Velasquez had tried to bribe him.

However, the paramilitary soon retracted that claim and has since admitted that one of the attorneys present in the presidential meeting, Sergio Gonzalez, had asked him to do a “favor for some friends,” mentioning Mario Uribe and the then-president’s brother Santiago, who is currently on trial for allegedly founding a paramilitary group of his own.

Ex-paramilitary testifies he was bribed to smear supreme court judge

While Uribe had been claiming that he, his political allies and his family had been part of a criminal conspiracy, his claim backfired after being contradicted by both paramilitary commanders and later the Supreme Court, resulting in even more judicial problems for the former president and his aides.

“There exists no conspiracy against Uribe and his associates. The conspiracy that does exist is theirs,” said Salvatore Mancuso, the former leader of the AUC who was extra-judicially extradited to the United States while testifying over his own crimes and his ties to Colombia’s political players.

According to “Don Berna,” another senior paramilitary commander, Gonzalez — the lawyer who attended the meeting in the presidential palace —  told him “that if we had to come to extreme measures, we should find the way. I imagine that these extreme measures meant an attack or something, particularly against magistrate Velasquez because he was the one most involved in finding people who had to do with parapolitics and its relation to the government.”

The conspiracy between the former AUC members and the former president is still under investigation in Colombia, but has already secured the incarceration of two former DAS chiefs, Uribe’s then-chief of staff.

In spite of the ever-mounting evidence of ties between Uribe’s family and administration with the paramilitary AUC, the former president has consistently insisted that he is part of a criminal conspiracy seeking to discredit him.

Velasquez was never able to finish his investigation against politicians and particularly the head of former administration; in 2012 he was controversially removed as head of the Supreme Court’s Investigative Unit and resigned.

By then, 66 lawmakers and seven governors had been sent to prison.

Instead of going after the head of Uribe, he ended up joining the UN commission that ultimately ended the political career of an entirely different president, that of Guatemala.