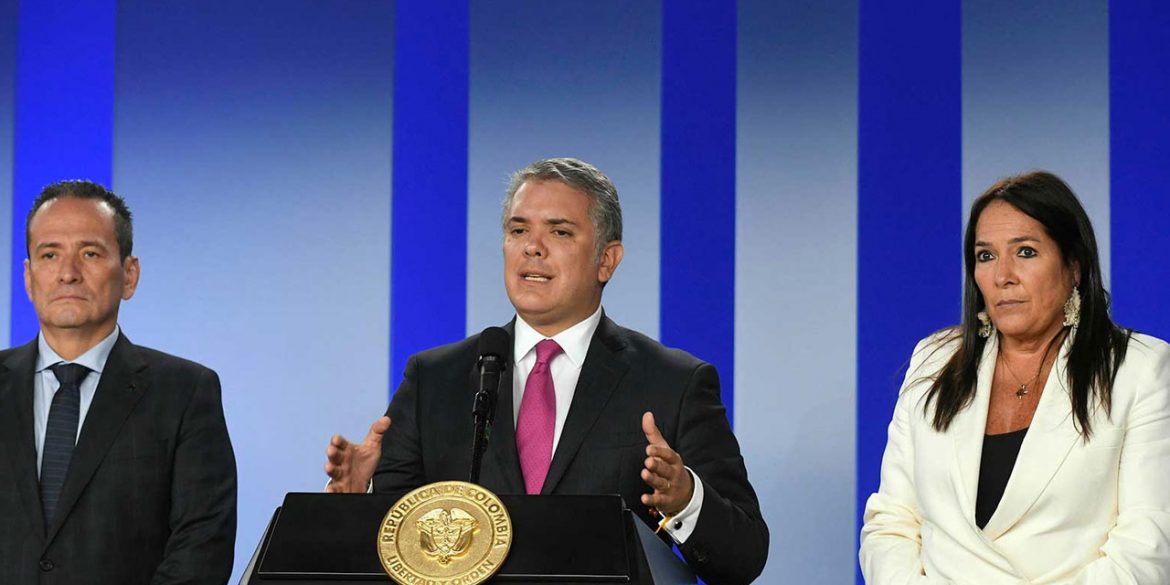 Colombia’s president Ivan Duque announced on Friday he would propose a 10-year extension of the law that seeks to return stolen land and help victims of the armed conflict, putting him at loggerheads with his own party.

Duque announced on Friday that he would extend the validity of the 2011 Victims and Land Restitution Law by another 10 years.

We must present to the Congress of the Republic a bill with a declaration of urgency to be able to extend the validity of the victims law for 10 more years, to guarantee attention and reparation to this population, affected for years by terrorism and violence.

This law grants the country’s almost 8.9 million victims of the armed conflict the right to compensation and created mechanisms that would allow displaced farmers to return home, but was going to expire in 2021.

Duque said that he would not just propose an extension of the law, but also include articles that would provide special attention to ethnic minorities, who have been disproportionally  left behind in the implementation of the Victims Law, according to Congress.

We are going to update all the decrees with the force of law that also extend this coverage to victims by ethnic groups, in a differentiation mechanism; we as a government want to continue complying with the victims and we want reparation to be a reality.

Duque’s “urgent” bill to extend the Victims Law followed reports that no more than 13% of victims have effectively been attended over the past eight years.

A high-level commission said in August that the Duque administration’s budget allocations would only allow the compensation of less than 20% of victims before the law’s original expiration in 2021.

Particularly the compensation of victims of state violence and the restitution of dispossessed land have been vehemently rejected by the minority coalition party and its leader.

Uribe was one of the most vocal opponents of the Victims Law when it was proposed by his successor, former President Juan Manuel Santos. The former president did not challenge Duque’s extension, other members of his party did.

CD Senator Maria Fernanda Cabal, the wife of controversial ranchers federation chief Jose Felix Lafaurie, lambasted Duque on Twitter and claimed he was betraying small farmers, “the majority of whom are victims who absurdly were dispossessed by Law 1448” which she has vehemently opposed.

The day before Duque’s announcement, the cousin of late drug lord Pablo Escobar and CD Senator Jose Obdulio Gaviria opposed the extension at a hearing of the Constitutional Court.

What happened before Duque’s surprise announcement

The former ministers claimed that the state’s failure to effectively implement the law constituted a “grave human rights violation.”

Cristo said Duque’s reluctance to implement the Victim’s Law was part of his administration’s efforts to derail the implementation of the 2016 peace deal with the FARC, according to newspaper El Tiempo.

The peace process that followed this historic agreement is also opposed by the far-right ruling party.

Instead of strengthening and broadening the offer of reparation measures, they are discontinuing the operations of these mechanisms, which would evidently go against the constitutional structure that was designed for the implementation of the peace agreement.

The representative of the United Nations’ Office for Human Rights in Colombia, Alberto Brunori, urged the court to make victim reparation a state policy rather than a government policy and said that “it is necessary that a sustained period of time be granted” in order to attend victims of the armed conflict.

The pushing back of the Victims’s Law expiration date as announced by Duque appears to be supported by Congress with the exception of Duque’s own party.

The government has yet to formulate the bill. Unless Duque surprises, the extension would allow his government to continue its policies as planned and leave the effective implementing of the law, or whatever will be left of it, to the next administration.