The formalization of charges against former President Alvaro Uribe couldn’t have come at a more unfortunate moment for Duque, who was already struggling with his credibility.

One of the president’s main talking points has been “legality,” making it awkward at best that he called a man charged with fraud and bribery “honorable.”

If you ask me, I would sum up Alvaro Uribe in one word: honorable.

The president’s political patron has been tied to organized crime since Duque was nine years old, but has miraculously been able to evade and delay justice until last year. The president conveniently has pretended that the 14 Supreme Court investigations and 40 Congressional investigations do not exist.

Duque is nobody without Uribe 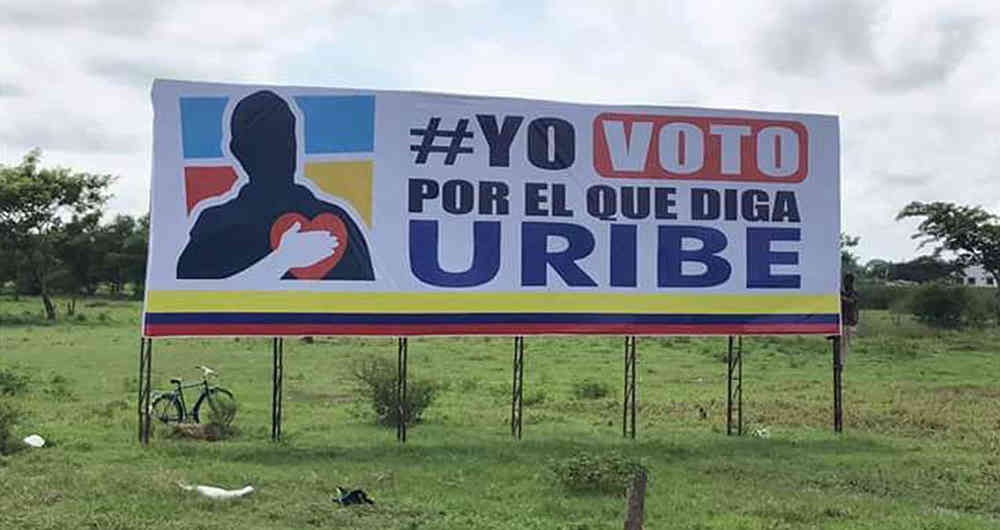 “I vote for whoever Uribe says,” this 2017 billboard says.

The president’s problem is that he doesn’t have an option. Duque owes his presidency to the former Medellin Cartel associate and would be considered a traitor by his far-right party and Uribe’s hard-line supporters if he distanced himself.

Duque became “whoever Uribe says” when the former president and his far-right allies wanted to retake control over the government in the 2018 elections.

Last year, his party reminded him “who got him into office” when Duque tried to develop his own political agenda and wasn’t generous enough is giving lofty positions to Uribe’s friends.

Without Uribe, Duque has no allies. He does not enjoy the support from the majority of Congress and, had it not been for Uribe, would be considered too soft by many in his party.

Last week, the president also defended his boss, but stressed that he had to be careful expressing his loyalty because “it is up to me to face these judicial bodies” if he oversteps his boundaries.

“As a Colombian,” Duque said last week, he considered his political patron “a great human being, a person who has always worked for our country with a lot of dedication and commitment.”

Twenty years ago, the president still dismissed Uribe as a “clear expression of Colombia’s extreme right” but Duque has apparently sacrificed his integrity for his ambition to become president.

Uribe a ‘clear expression of Colombia’s extreme right’: Duque in 1998

Duque in for a s#!tstorm

While claiming to be Mr. Legality, Duque and his party have taken the law with a pinch of salt.

The president last year almost caused an institutional crisis when he objected to the war crimes tribunal that threatens to have legal consequences for multiple of Uribe’s allies despite Constitutional Court approval.

If Uribe is convicted by the Supreme Court and sent to prison for a minimum of six years, both Duque’s cabinet and his party will be without their  leader, the man whose silhouette makes up their logo will be a convicted criminal.

It is possible that Duque is expected to get Uribe out of jail, and he can’t, unless he violates or changes the constitution.

Colombia’s current constitution only allows a congressional pardon for political crimes, not fraud and bribery, and must be approved by two thirds of both houses of Congress.

Duque has the support of little more than one third of Congress and he will have even less if he loses support from Uribe’s people in Congress.