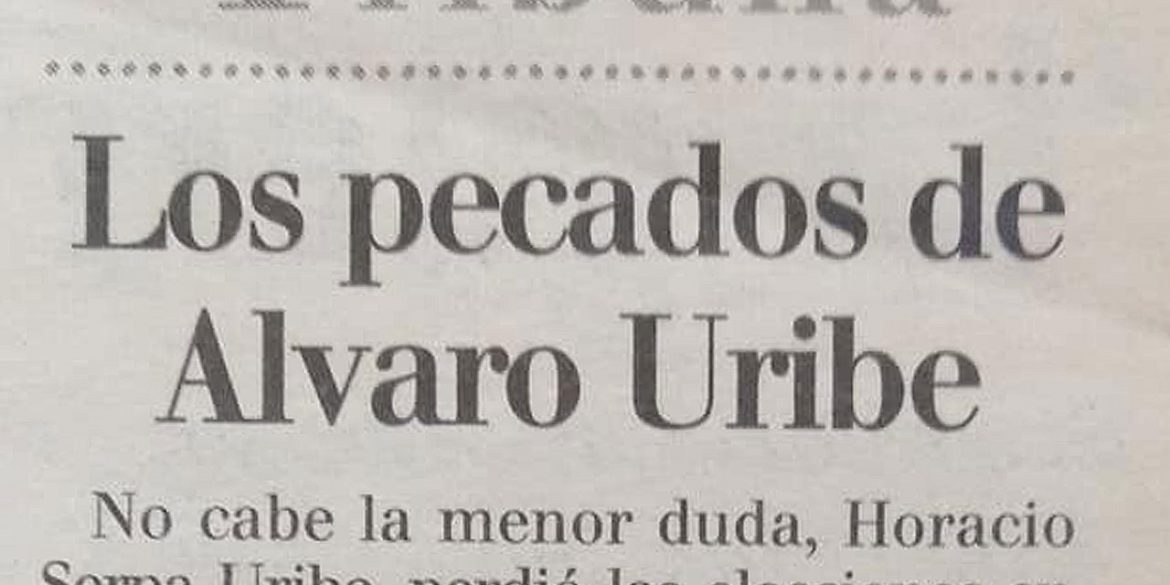 Uribe a ‘clear expression of Colombia’s extreme right’: Duque in 1998

In the column, called “the Sins of Alvaro Uribe,” the 22-year-old Duque fiercely criticized Uribe’s role as the “shield bearer of the Convivir,” the predecessors of the AUC that ended up assassinating 100,000 citizens.

Uribe is identified as the shield bearer of the Convivir, or in other words, a clear expression of the Colombian extreme right, which conceives peace only as the result of a military victory over those who have taken up arms.

At the time, Duque blamed Uribe for the victory of former President Andres Pastrana (Conservative Party) in the 1998 elections for his refusal to support Pastrana’s opponent, then-Liberal Party candidate Horacio Serpa, in the Antioquia province.

Uribe at this moment is only worried about organizing his campaign for 2002, and that’s why he doesn’t care about the defeat of the party. It has already become clear to us that Uribe is no prophet in his own land.

The column at the time appeared in newspaper El Tiempo, which at the time was owned by the family for former President Juan Manuel Santos, Duque’s then-political patron.

Months before Duque wrote his column, former President Ernesto Samper had banned the Convivir groups Uribe had been promoting fanatically because of the growing evidence they had joined the AUC and were committing human rights violations on a massive scale.

Pastrana, who did want to pursue peace talks, appointed Santos his Finance Minister. Duque was given a post at the Inter-American Development Bank.

Duque changed his mind about Uribe after Santos had left their old party and joined Uribe’s cabinet in 2006 as defense minister.

Despite mounting evidence Uribe was involved in all kinds of war crimes, the president switched sides in 2011 when his current political patron offered him a job as his assistant at a UN panel.

At the time, Uribe was getting increasingly annoyed with Santos for failing to put an end to the investigations that were putting a growing number of Uribe’s criminal allies in prison.

The two became each other’s arch rivals when Santos agreed to negotiate peace with the FARC, the guerrilla group Uribe had been trying to defeat first with the Convivir and later with the military.

Duque joined Uribe’s newly founded far-right party, the Democratic Center, in the Senate in 2014, began his opposition to the negotiated peace he propagated in 1998. He ended up being “whoever Uribe says” in the 2018 elections and won.

Instead of being loyal to the principles he once said he stood for, the president is now loyal to the alleged war criminal he once described as “a clear expression of the Colombian extreme right.”