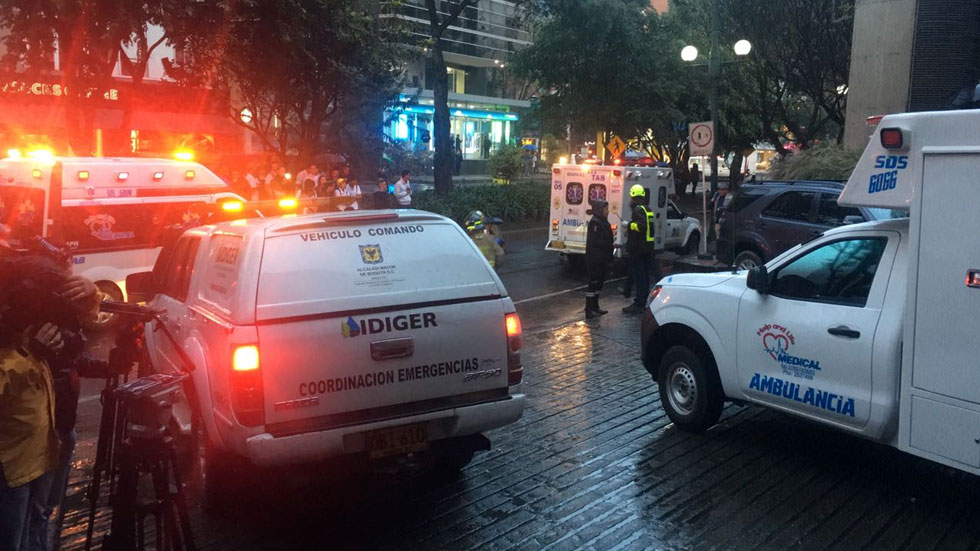 While President Juan Manuel Santos urged calm after a bomb attack in the capital Bogota in the middle of a peace process with the country’s largest guerrilla group FARC, political leaders from all sides of the political spectrum rejected the violence.

Santos talked to press inside the Andino shopping mall around 10PM where a bomb killed three people and injured nine others approximately five hours earlier.

The bomb attack further increased social tensions between supporters and opponents of an ongoing peace process with the FARC guerrillas, tensions their political leaders immediately tried to curb by urging for calm and refraining from potentially incendiary rhetoric.

Footage of the Andino mall from shortly after the attack

While terrorism committed by possible “spoilers” of the ongoing peace so far has only affected citizens in rural areas, the attack on one of the capital’s most exclusive neighborhoods is a sudden and destabilizing escalation of violence in the country that is already strongly divided over ongoing peace process.

In spite of their often bitter differences, both the government and its oppositions on both the left and the right considerably moderated their tone and unanimously rejected the attack.

This is a vile, cruel, cowardly act and we will not rest until we have captured those responsible. Colombians may have the absolute certainty we will catch those responsible and bring them before justice.

The president added that “those who want to kill the joy of peace will not succeed.”

The president also urged for unity, adding that “the response to these attacks is to continue life normally.”.

Bogota Mayor Enrique Peñalosa said “the best response to terrorism is not let it intimidate us.”

Colombia’s hard-right opposition, led by former President Alvaro Uribe, drastically moderated its tone and sent out a tweet strongly condemning the attack while expressing its solidarity with the victims.

The almost as hard leftist opposition was equally adamant in rejecting the attack.

One of the Marxists’ most polemic figures, former Bogota Mayor Gustavo Petro, also abandoned his general confrontational rhetoric and said to “feel deeply sorry that while the country is approaching peace, they want to submerge Bogota in violence.”

Senator Jorge Robledo of the Marxist Democratic Pole Party expressed his “absolute rejection of the terrorist act in the Andino center,” adding that according to him “absolutely nothing justified terrorism.”

The leader of the Communist Patriotic Union party, Aida Avella, said “criminal attacks are not of this time.”

The last time Bogota was hit by a high-impact attack was in 2012 when a local criminal gang bombed the car of former Interior Minister Fernando Londoño, killing five and injuring the former minister.

This attack was initially attributed to the now-demobilizing FARC, which almost immediately condemn the violent act they vowed to abandon on November 24.

The country’s last-standing Marxist rebel group, the ELN, which is talking peace with the state, but has used violence threatening both civilians and the State, also immediately rejected the attack. According to the Marxist guerrillas, “We share the pain and are in solidarity with the victims.

The group has repetitively requested to be included in the peace process, but has remained quiet for the past weeks and has stopped responding to emails from Colombia Reports for a similar period of time.

Dissident FARC groups and other armed actors like the so-called “Pelusos,” the “Puntilleros and the “Aguilas Negras” also did not immediately respond publicly.

Ahead of the peace talks, groups like these were considered the most likely threat of the peace process, in spite the AGC openly supporting the process and even persisting to be included.

For the than a year, the UN has urged Colombian authorities to effectively dismantle the paramilitary groups that for decades have colluded with elements within the state.

Who would do such a thing?

According to the president, “there exist no clear indications about who could be responsible, but we know how to carry out investigations like this and these are already underway.”

However, the president contradicted a recently leaked National Police memo explicitly stating that the AGC was planning to carry out terrorist attacks “in Medellin and/or Bogota.”

However, with a series of political and criminal players, including dissident FARC guerrillas, the list of possible suspects is long.