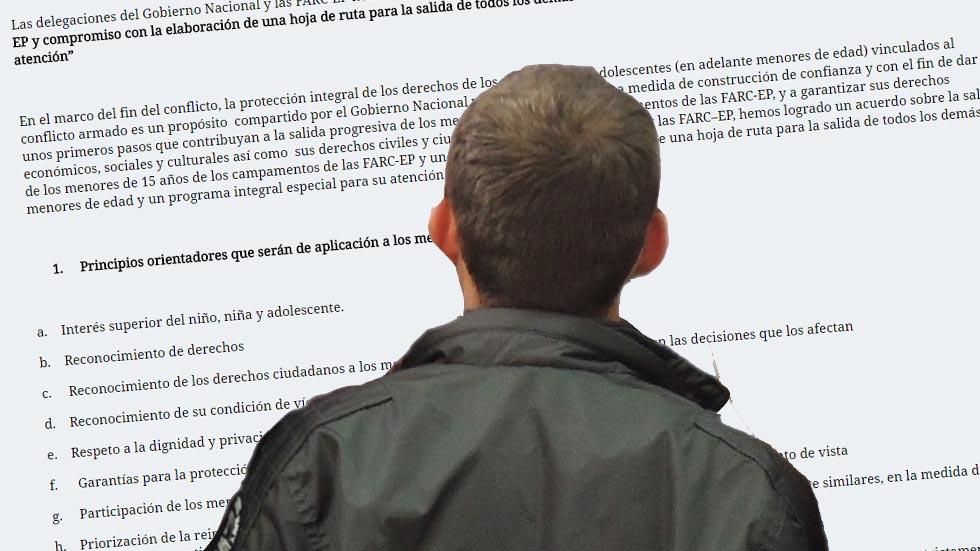 Colombia’s left-wing FARC rebels agreed to release its child soldiers, while the government vowed to grant victim status to those under 15 years of age and provide transitional justice for the rest.

The announcement on Sunday comes as both sides seek to agree a framework for a bilateral ceasefire and deals with the sensitive issue of how to release thousands of minors said to be in the ranks of the Marxist guerrillas.

The deal will see the “withdrawal of minors under 15 from camps of the FARC-EP and commitment to the development of a roadmap for the withdrawal of all other minors and a special comprehensive program for their attention.”

The FARC had announced it wanted to release the child soldiers in June last year already, but said it was waiting for government safety protocols that would secure a safe return for the children and minors.

Almost a year later, the parties announced they had reached agreement on the children’s release from the group, and said this would take place before a final peace accord has been reached, possibly in a matter of weeks.

The FARC additionally promised to open the books on how many child soldiers are currently in their ranks ahead of the mass release, making sure authorities are prepared to receive them.

In respect of minors, the agreement aims “to ensure their economic, social and cultural rights, as well as their civil and citizen rights” and to have the children out of the FARC, possibly as soon as within a month.

The provisions made for child soldiers aged 15 or less facilitate an unconditional release whereby they will in no case be held criminally responsible.

Minors aged between 16 to 18 who leave the camps will be given a “pardon for rebellion” provided they are not indited for war crimes such as rape or homicide.

Those who do not qualify for the pardon will have their cases reviewed at a later date through the transitional justice mechanism.

Guarantees from the FARC

The FARC for their part gave a multitude of guarantees to ensure that the framework for the removal of minors from their ranks will be successfully carried out.

They will end the practice of recruiting minors under 18 years of age and provide authorities with the necessary information regarding those under 15 whom are due to leave the camps, so they can be adequately received.

They have also agreed to “contribute to the identification of all minors in the camps of the FARC-EP, so that they will receive the necessary support and assistance in the withdrawal process and participate in the special program for the guarantee of their rights to be agreed.”

Lastly, the guerrillas vowed to released children under 15 to authorities “as soon as the protocol and the chosen transitory plan is agreed.”

Guarantees from the government

Colombia’s government agreed to form a technical committee led by the Ombudsman and the Department of Human Rights of the Presidency of the Republic to work in conjunction with human rights groups ICRC, UNICEF and IOM.

Within 15 days, they will submit “a proposed protocol for the withdrawal of minors under 15 years from the camps of the FARC-EP, as part of the confidence building measures, and a transitional hosting plan for the guarantee of their rights, as established by this agreement.”

Within 30 days, the government will submit a “special comprehensive program for all minors referred to in this agreement, in order to ensure the restoration of their rights.”

These guarantees from the government will seek to provide a reintegration plan for the minors that will safeguard their human rights upon their reintegration into civilian society.

Once this plan is agreed between the parties and the external supervises the FARC vow to release the children under 15.

The design of this special program for the reintegration of minors will consider a broad range of factors in order to make the process as successful as possible.

It will put the minor at the center of the process in order to reintegrate them into their own communities or culturally similar communities as soon as possible according to their best personal interests.

The plan will prioritize healthcare and provide education at all levels including scholarships and facilities for higher education for those who desire it.

Families of the victims will be actively involved in the process with assurances for their inclusion in “offers by the state and international co-operation of productive projects and decent housing to contribute to their social stabilization.”

The agreement acknowledges the need for international overseers to give a helping hand to the reintegration process.

Both negotiating parties will request the help of UNICEF and the IOM  “to follow up the compliance of the commitments made in the framework of these initial measures.”

The FARC has long been criticized for the use of minors in the war against the state they’ve been waging since 1964.

The use of child soldiers under 15 is a violation of international humanitarian law and possibly one of the most common war crimes committed by the guerrillas in their half-a-century existence.