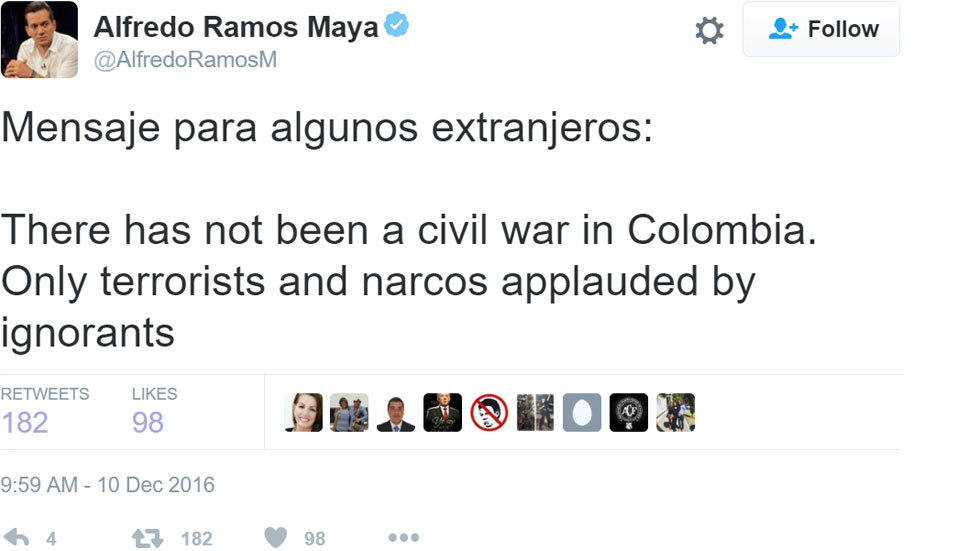 Supporters of hard-line former President Alvaro Uribe (2002-2010) on Saturday spun the hashtag “#NobelComprado” (BoughtNobel), which quickly became a trending topic on Twitter, much to the embarrassment of the Nobel Peace Prize laureate.

The hashtag was subsequently promoted by prominent political opposition figures like Uribe ally and former Democratic Center presidential candidate Oscar Ivan Zuluaga, the son of former governor Luis Alfredo Ramos (investigated over alleged ties to death squads) and the son of former President Andres Pastrana (1998-2002), who led failed peace talks with the FARC between 1999 and 2002.

At a press conference with Norwegian Prime Minister Erna Solberg, Santos responded that “they have said … I am a communist, that I am an ally and business partner of Fidel Castro to introduce a subtle revolution in my country, but the most absurd I have heard this group say is the claim this award was bought.”

Santos’ received support from the Norwegian Solberg, who said “you cannot buy a Nobel Peace Prize or any academic prize. They are awarded by an independent committee that act with a high level of integrity.”

Disinformation a threat to peace

The spreading of fake news, baseless claims or disinformation for political purposes through social media has become a global media phenomenon, but in Colombia it has become a serious threat to peace.

During the campaign leading up to a referendum, countless conspiracy theories, fake excerpts of the peace agreements and blatant lies were spread by Uribe and his followers.

The opposition campaign was successful, the October 2 referendum rejected the peace deal by a razor sharp margin and the peace process with the country’s guerrilla group plunged into a crisis.

Why this resistance to peace?

The political stakes in Colombia’s peace process are high and very powerful figures in politics and the private sector are getting nervous over their alleged implication in the tens of thousands of war crimes that were committed during the country’s 52-year-long conflict.

While the FARC has only 6,600 guerrillas and 10,000 militia members, the transitional justice system would also try more than 24,400 state officials and 12,500 civilians who are either investigated or already convicted for war-related crimes.

Among those accused of war crimes are Uribe, under whose watch thousands of civilians were executed by the security forces, numerous senior members of his Democratic Center party, dozens of army generals and other former public officials.