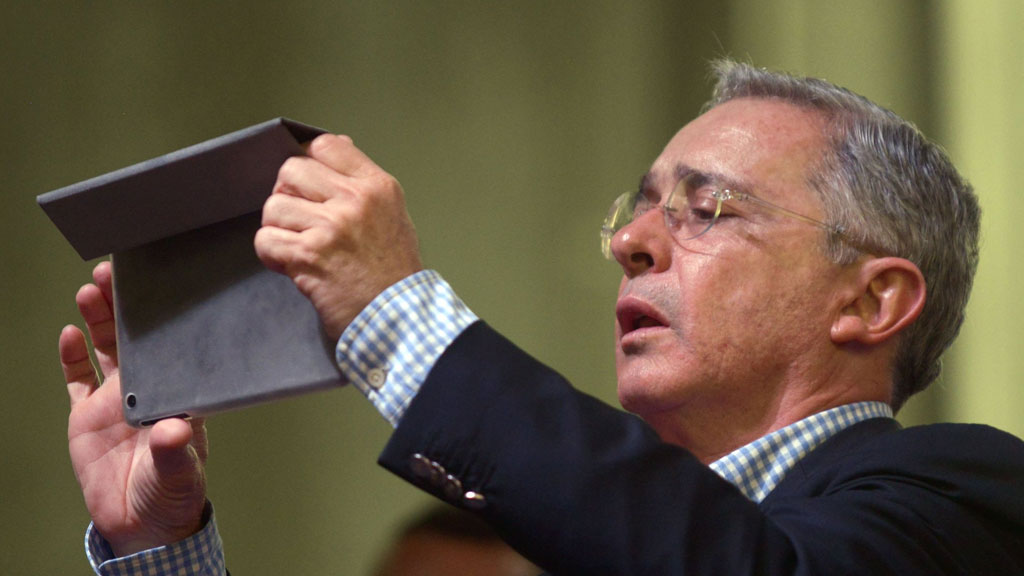 How Colombia’s Mr. Wiretap ended up being wiretapped

Colombia’s former President, Alvaro Uribe, was once known as the president whose administration wiretapped pretty much anyone deemed a political risk. Now, the current senator appears in phone calls wiretapped by the Supreme Court.

Uribe tried to make a stink earlier this month, asking the Supreme Court on Twitter why he was being wiretapped.

The accusation raised eyebrows across Colombia as his former chief of staff and two of his former intelligence chiefs are in prison, for no other reason that illegally wiretapping the Supreme Court, journalists, national and international human rights organization, and politicians.

These wiretaps were allegedly carried out to frustrate investigations against Uribe’s cousin Mario, a former Senator who was eventually arrested and convicted for using paramilitary death squads to advance his political career.

Additionally, a number of top members of Uribe’s party, the Democratic Center, are investigated for illegally obtaining classified wiretap information related to ongoing peace talks with the FARC ahead of the 2014 elections.

According to weekly Semana, Sources within the court have said that Uribe’s claim he is being wiretapped is half true.

Uribe’s voice does appear on recordings obtained through wiretapping between September and December last year, but only because the former president was regularly calling an undisclosed fellow-politician who during that period was the target of a wiretapping operation as part of an ongoing criminal investigation.

The magazine did not reveal the name of the wiretapped Uribe ally, but the high number of Uribe allies under criminal investigation make his appearance in wiretapped phone calls virtually impossible to prevent.

In fact, the court is currently investigating Uribe’s alleged involvement in a 1997 paramilitary massacre, which creates the legal possibility to wiretap the former president, who has gone from alleged chief persecutor to self-proclaimed victim of persecution.

Uribe did once before appear in a wiretap that was leaked in 2007. In that conversation, the president said “I hope they are recording me” before threatening to “punch you in the face, faggot” to an allegedly corrupt official.